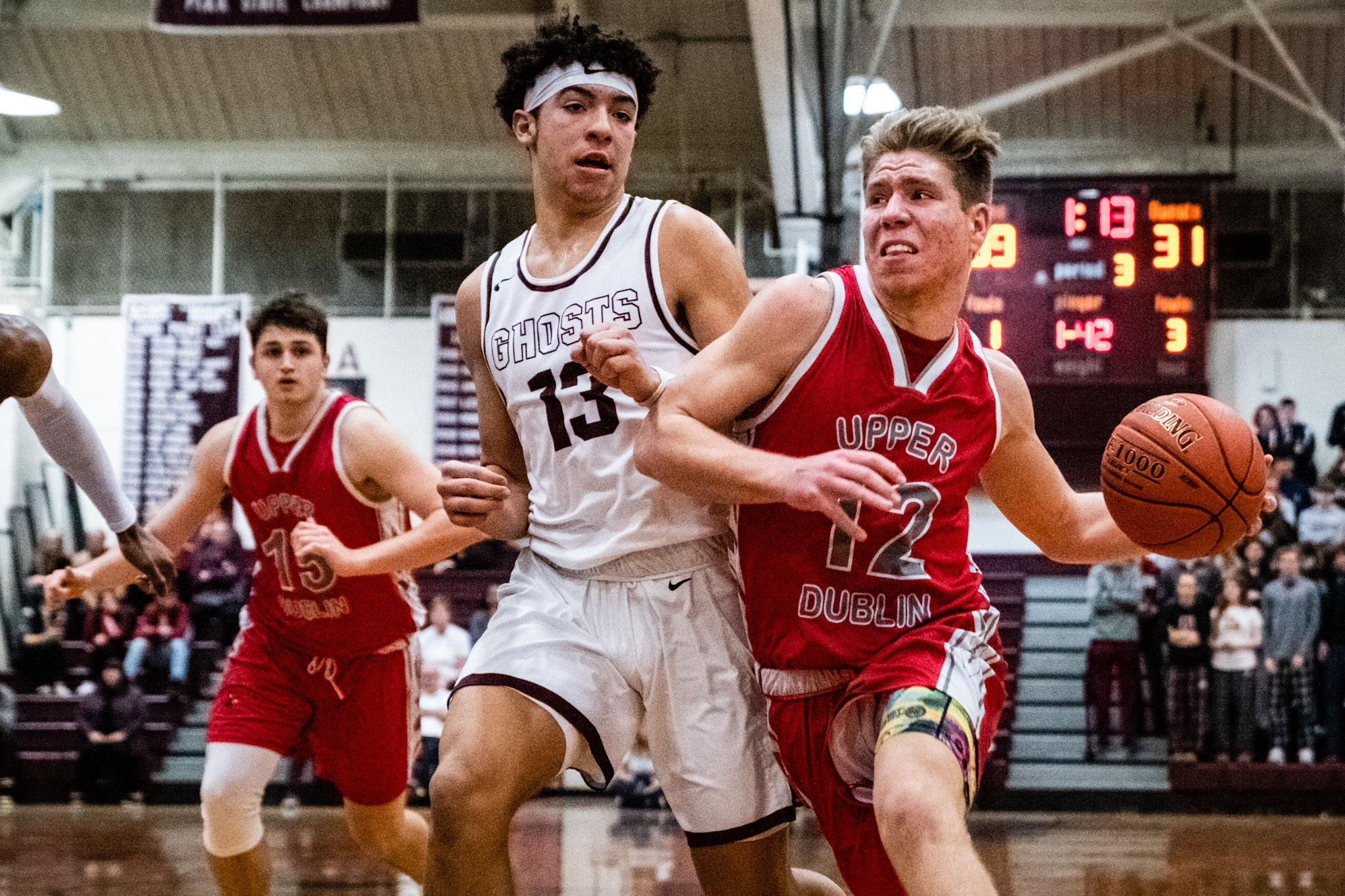 The junior forward scored 21 points Wednesday, earning player of the game honors in a loss to Shipley, then followed it up with an equally strong outing in a must-win game Friday. A standout wide receiver on the football field, Baker’s got plenty of ability on the hardwood too and showed his offensive and defensive ability as the Ghosts picked up a crucial win over Upper Dublin.

Led by 20 points and six steals from Baker, the Ghosts finished strong in the fourth quarter to top the Cardinals 54-38.

“Our coaches have preached defense all year, help, principles, everything like that and we just focused on that in the second half,” Baker said. “I found confidence in myself, my teammates are trusting me to make plays and I always want to be the one to step up and make big time plays in big time games.”

Baker got all his scoring done in the first three quarters but still made a major impact in the fourth guarding UD big man Drew Stover. The 6-foot-3 junior, who was 8-of-11 from the floor, scored in all manner of ways from offensive rebound putbacks to drives and even a 3-pointer.

Both teams entered the night outside of the District 1-6A playoff field, so it was essentially a game they both needed to win.

Yet for as well as the Cardinals passed at times, Abington had five first quarter steals including a swipe and dunk by Manir Waller that would set a tone for the night.

“Turnovers were a problem the first time we played Abington, we started this game by turning the ball over but we settled in our offense and felt like we could get something from their aggressive defense,” UD coach Chris Monahan said. “We did a good job of it in the first half but the second half, we made bad decisions with the ball, didn’t get into some of the stuff we wanted to and had a lot of breakdowns defensively.”

Upper Dublin’s Drew Stover (15) throws down a slam dunk in front of the Abington student section during their game on Friday, Jan. 24, 2020. (James Beaver/For MediaNews Group)

Waller picked up his second foul in the second quarter, putting the Ghosts lead ballhandler on the bench until halftime and Upper Dublin was able to take a 19-18 lead before back-to-back treys by Joey Brusha restored the lead. Still, a three by Brady in the last minute cut the Ghosts lead to 28-27 at the half.

Stover led Upper Dublin with 18 points, but was held to just six in the second half as Abington limited the Cardinals to 11 total points.

Baker came out energized in the second half, scoring off a feed from Brusha, hitting two at the line and turning one of his six steals in an and-one and 35-27 lead with 5:02 left in the third.

“Baker, early in the second half, just killed us,” Monahan said. “We got caught in switches a couple times and he was able to get to the block. We missed some assignments on him and he got going. He’s good on the o-boards and every time he got around the rim, it seemed to be a finish.”

BOYS BASKETBALL: @goghosts @baker11_caleb pounces on an errant pass and gets the and-one Q3 against Upper Dublin
FT put Abington up 35-27, capping a personal 7-0 run for Baker who led all scorers with 20 pic.twitter.com/rxg8NKadmR

Abington coach Charles Grasty imagined this type of impact from Baker, even if it took a little longer than planned for the junior to get comfortable.

“Caleb’s stepped up, I think he was just trying to get comfortable and it took longer than we thought it might,” Grasty said. “We saw it from his since he was in ninth grade. We know he can play, he may not have been comfortable in his role. I get that it’s game 16 or 17, but we’re not out of this thing so it’s a good time to get comfortable.”

Brady scored just five points, but the guard had a terrific all-around game and played almost every second until the score became too much to overcome. The senior led UD with nine rebounds, had a game-high eight assists, plucked a steal, had a chase down block of Waller and drew two charges.

It’s the kind of effort Monahan has gotten all season, but one Brady and his classmates will need to keep giving as they try to squeeze into the playoff field for a second straight season.

“He does everything for us, we ask him to do a lot and we have to try to find times to sub him out of the game,” Monahan said. “He’s guarding Waller, doing a lot for us offensively, taking the charges. You see him wear down and we’re just asking ‘Come on, Baz, just hold on a little bit.’ That’s been every game this year, he’s a 30-plus minute kid.”

Abington’s Connor Fields (21) knocks the ball out of Upper Dublin’s Will Mead’s hands on a strong defensive play during their game on Friday, Jan. 24, 2020. (James Beaver/For MediaNews Group)

It was still a close game going into the fourth with Abington up 39-33 before the Ghosts defense took over. Almost like a baseball hitter sitting on a certain pitch, the Ghosts were waiting for the Cardinals to try and feed the ball inside.

Abington opened on an 11-0 run fueled by five steals and a couple nice defensive stands by Baker against the bigger Stover. Baker wouldn’t take credit for the work himself and noted he had teammates all around ready to step in and help.

“Honestly, Coach Grasty just said to front him and I had a lot of help,” Baker said. “My teammates were backside and they helped me out guarding him and try to shut him down.

“The whole team is new this year, so it was all about team chemistry. We’ve started to find ours and it’s been blending all season.”

BOYS BASKETBALL: @UDHSCardinals @drewstover7 screens then gets the slam off a pocket pass from Bazel Brady Q3 against Abington pic.twitter.com/oxtGJ5PPlq

Stover snapped the run, but his hoop with 2:48 left in the game was UD’s first points of the final quarter and only cut the hosts’ lead to 51-35.

Unlike the past few years where the Ghosts were vying for at least a first-round bye, if not the top seed in districts, these Ghosts are just trying to get in. Abington has five games left, starting with Saturday’s visit to a Bensalem squad near the top of the 6A rankings, so the Ghosts have plenty of say if that will happen.

“We’re just trying to focus on this year, the here and now and keep the streaks going,” Baker said. “We’re trying to build a brotherhood, be strong together and play like we’re a family.”

“The energy is going to be there with these guys, it’s just about making the smart plays,” Grasty said. “We’ve looked around, we know where we are and who we have left. Our guys know what’s going on and what’s at stake, it’s not a secret.”