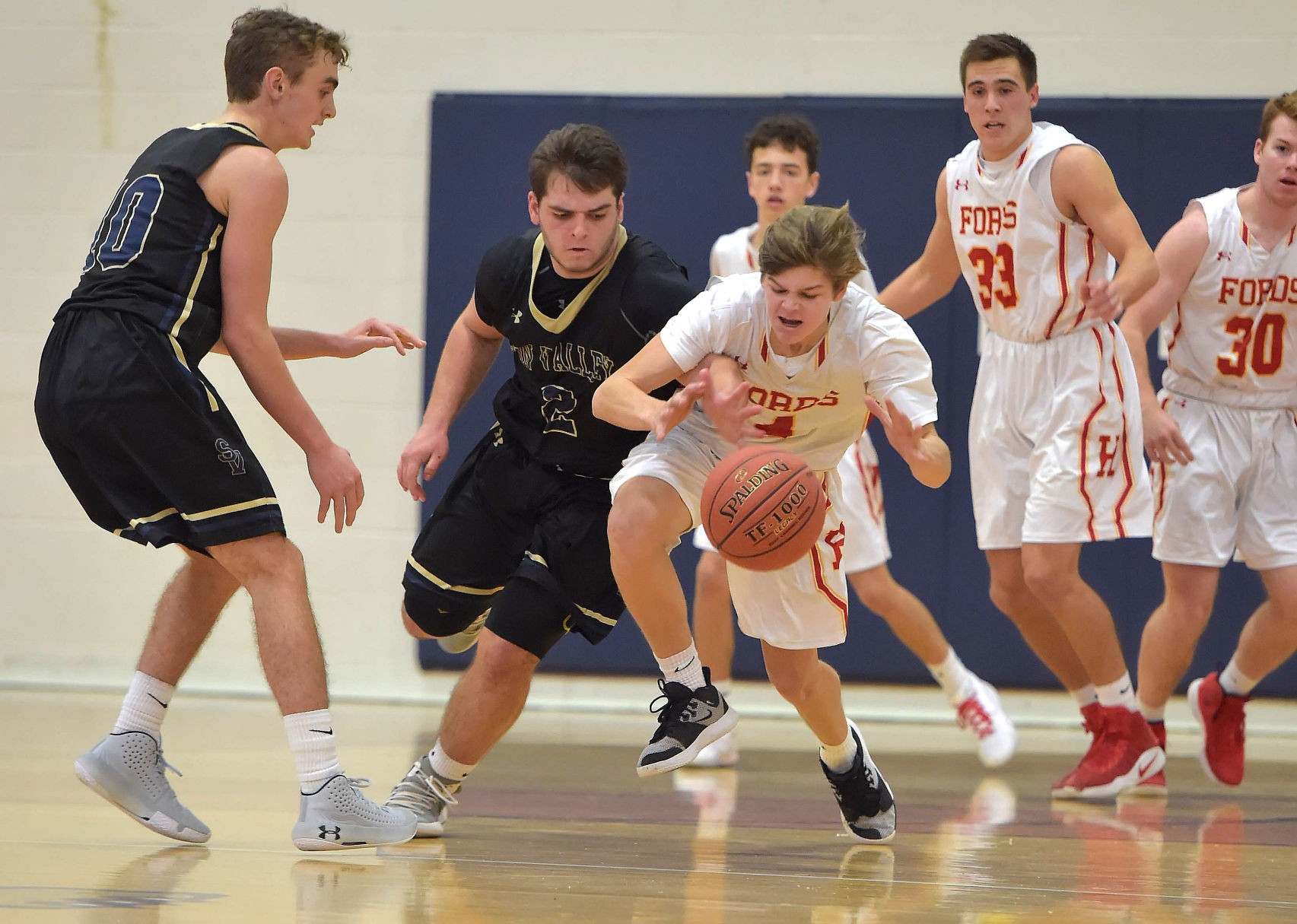 The Vanguards’ gadget defenses bottled up Haverford leading scorer John Seidman. Their conscientious close-outs of shooters limited the Fords to three makes on 21 attempts beyond the arc. It was exactly what coach Steve Maloney drew up.

So when a different Seidman stepped up to torch the Vanguards in the fourth, there was little Maloney could do but tip his cap.

Younger brother Googie Seidman, a freshman, buried three 3-pointers in the final quarter as the Fords rallied to a 52-45 win in the final of the Vanguard Tip-Off Tournament.

The younger Seidman fueled a 19-2 run for the Fords, who trailed 28-23 midway through the third. His first two triples came off feeds from John, designed plays for the freshman to pop behind the arc opposite the ball screen John dribbled through.

The contributions by Googie – and yes, that’s the name he, John and the Fords stand by – are part and parcel of a 10-man rotation. The Fords (2-0) lumped a variety of full- and half-court presses at Sun Valley, subbing freely. Both Googie Seidman and Adam Stuck, who scored 15 points, came off the bench.

“We’ve got a pretty cohesive group that has played together coming up through the levels of high school basketball,” Stuck said. “So we’ve been able to build connections in that way, and it’s been able to translate on the court.”

Part of the resilience was inspired by John Seidman. He endured a dreadful offensive day, limited to three points a night after scoring 25 to beat Interboro. He averaged 14.6 points per game last year.

But Saturday, with the constant shadow of Billy Fisher in zone defenses, Seidman never found his touch. He only attempted two shots in the first half, both 3-pointers, and his only bucket, a reverse lay-in in transition, came with 1:03 left in the third, cutting the deficit to one.

But Seidman still impacted the game. He led Haverford with four assists, six rebounds and three steals. He swiped two steals in a run of four straight Sun Valley turnovers in the third, which contributed to the Vanguards scoring one basket over nearly 10 minutes between the final two quarters.

“It just shows his versatility and how he’s able to affect the game always,” Stuck said of Seidman. “If he’s not scoring one night, he’s playing good defense and facilitating the ball really well. Overall, he’s just helping the team, and that’s all that matters.”

It didn’t help the pressure on Seidman that the Fords started ice cold from the field. They missed 14 of their first 15 attempts from range in a rim-rattling first half. Even with Googie Seidman’s run in the fourth, they still were just 6-for-26 from behind the arc.

That allowed Sun Valley (1-1) to take the edge in the third. A 3-pointer by Stuck, who was 6-for-6 from the field, sent the Fords into halftime with a 20-19 edge. But after a John Schievert triple, Sun Valley dashed off a 7-0 run, punctuated by a Kenny Lazer and-1 set up by Fisher’s feed off a screen.

Sun Valley’s offense shut down after that. Four consecutive turnovers didn’t help. It got worse when Fisher went to the bench, bleeding from a cut on his head.

Fisher scored 16 points to go with four assists, but the scoring was embellished by eight in the fourth quarter after Haverford had opened a double-figure lead. Dom Valente scored 12 points before fouling out; he was just 2-for-8 from 3-point land. With big man Nick Giannakopoulos fouling out in less than 10 minutes of game action without a point, Sun Valley’s offensive options were severely limited.

“It’s one of the first games of the season, so we’ve definitely got to work on getting guys open and being able to handle the pressure,” Fisher said. “Closing games is definitely one of the harder things to do in high school.”

Eight Fords attempted 3-pointers; only Googie Seidman (nine points), Schievert (14) and Stuck connected on any of them. Stuck’s 11 first-half points kept the Fords afloat. Schievert kicked in 11 in the second, including a 6-for-6 effort at the line in the fourth.

John Seidman was one of the first to congratulate his brother when Googie was awarded the tournament MVP plaque, as the Fords bench whooped it up. It’ll be a nice memento for the house.

“I guess that’ll go in his room now,” John said.

Also at the Sun Valley Tip-Off:

Interboro 59, Motivation 40 >> DaShawn DiEmidio asserted his will with 17 points and 14 rebounds, and Mekhi Wormack-Fields marked his second varsity start with 19 points, five rebounds and four steals to lead the Bucs (1-1) in the consolation game. Alec Wood added 10 points.