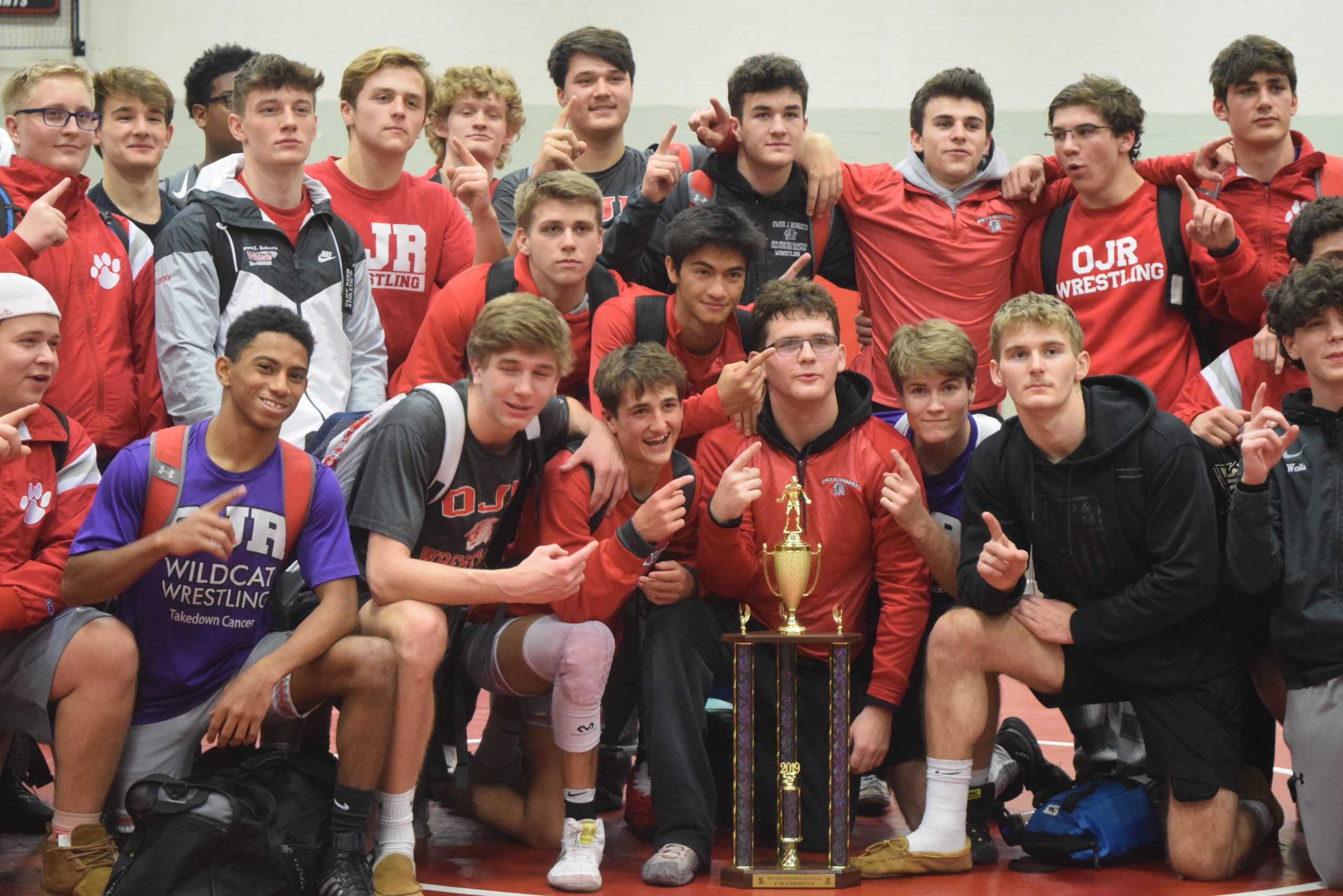 BOYERTOWN >> Steve DeRafelo had two things about which to be happy Saturday.

The one speaks to the potential for the Owen J. Roberts wrestling team in the 2019-20 season. The other is a referendum on his career.

The Wildcats got their campaign rolling at the Brian Bealer Memorial Bear Duals, winning the team championship with a 5-0 run at Boyertown. They also got DeRafelo the 200th victory of his head-coaching career at Bucktown.

Owen J. Roberts claimed the duals’ championship trophy — its first since the 2012-13 season — by edging Council Rock North, 40-36. With the match tied entering the last bout, Mason Karkoska’s major decision in the 113-pound finale proved the difference for the ‘Cats, who rolled earlier opponents Harry S Truman (69-9), Garnet Valley (52-21) and Gov. Mifflin (67-9) around a 40-36 win over Bethlehem Liberty.

“The fun thing about a duals is, you go against five teams,” DeRafelo said. “You see things you need to work on.”

As for reaching the 200-win mark in his 18th season heading the program — a tenure marked by three 20-win campaigns and double-digit victory totals all but one of the previous 10 years — DeRafelo saw that as a distinction more than his to enjoy. It came on the fourth match of the day, clinched with a 49-point run through the first nine weights before Mifflin was able to get on the scoreboard.

“The kids you coach get to enjoy the 200 victories,” he said. “It means they battle and grind out 200 wins. The wins are for the kids.”

Win No. 201 over CR North was a close one from the start.

The Wildcats pulled even with the Indians twice through the first four weights, and again with Tommy Dempsey’s pin of Brendon Hardy at 182 before Dylan Bauer scored a 3:27 drop of Alex Roe at 195. Francis McCoy followed with a 1:55 drop of Blake Silber at 220 for a 36-24 lead that faded with the Indians getting pins at 285 and 106.

That set the stage for Karkoska to make a statement in his first varsity-level action. The OJR freshman got the drop on Anthony Burke in the first period at 113, then dominated the Rock sophomore on the way to a 9-0 major decision.

“It was big for me, my first high-school tournament,” Karkoska said after completing a 5-0 opening day. “It’s a good start to the season. I did a lot of hard work through the summer.”

“It was an outstanding day for him,” DeRafelo added. “For a ninth-grader, he’s got a lot of physicality.

Owen J. Roberts’ Dylan Bauer finishes his pin at 195 pounds as his team celebrates in the background during the final of the Brian Bealer Memorial Bear Duals Saturday at Boyertown. (Austin Hertzog – MediaNews Group)

Bears starts strong >> Nik Christine didn’t have to wait long to get his first victory as Boyertown’s head coach.

He got it at the start of Saturday’s Bealer Memorial Bear Duals, the host team rolling up a 69-8 victory over Dallas. It was the start to a 3-2 outing for Boyertown, capped by a 50-29 victory over Gov. Mifflin in the tournament’s fifth-place match.

“Everybody did what we expected,” Christine said. “We had high expectations. It was a good start to the year, and now we have to build on it.”

Julien Maldonado, Boyertown’s highest-finishing returnee, pinned his way to a 5-0 record on the day. Maldonado, an eighth-place medalist at the PIAA Class AAA tournament earlier this year, had four drops — the fastest a nine-second pin against Dallas’ Kyle Langan — to go with a gritty 1-0 decision of Interboro’s Nate Shippey.

“We refocused after Interboro,” Christine noted. “It was a good indicator of how well we made adjustments. You always want to do better.”