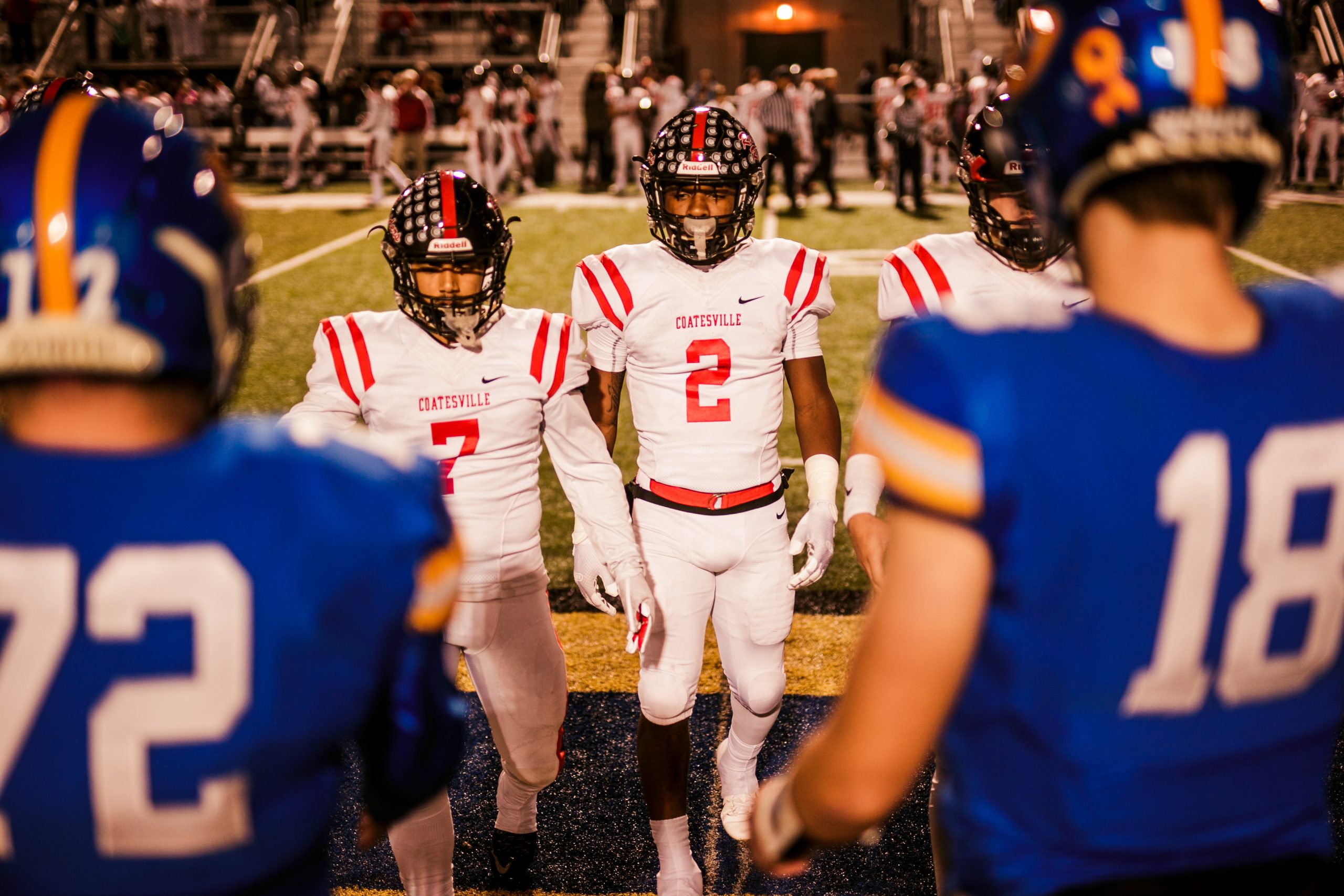 It’d be fair to assume there was some curiosity on the Whippets’ sideline about their rivals, as well.

This is the rematch the Ches-Mont League not only wanted, but deserved.

Friday. 7 p.m. Kottmeyer Stadium. District 1-6A championship game. For all the marbles.

From the outside, what’s at stake is the district title. But there is so much more for those involved. Downingtown and Coatesville, separated by just a few miles, are connected forever by the timeless clashes of minds, souls and bodies.

Coatesville won the regular season matchup, 29-21, just over a month ago. The Whippets haven’t defeated the Red Raiders since 2015, and with such a talented senior class, West is determined to end that drought.

The foes have maneuvered their way to the rematch, running away from teams in their path. The Raiders have scored 138 points this postseason, while the Whippets have put up 152.

“I’m not gonna say we were anxious to play them again,” West coach Mike Milano said. “I hear all this stuff about revenge factor and all that stuff, but everyone is really good right now. I don’t know if I wanted to play Garnet again, either, with that option attack.”

While coaches will say the right thing, there’s no denying what how the kids feel.

“We want our revenge,” West quarterback Will Howard said. “We knew there was a good chance we could see them again. We’re really fired up and we’re ready to get our revenge.”

Emotions will surely be raging early, but this game will come down to who executes more consistently.

Coatesville, winners of 13 straight district playoff games, is used to peaking at the right time. After topping 40 points three out of nine regular season games, the Raiders have done it three straight weeks.

Ortega and receiver Dapree Bryant have elevated their games another level, and Artie Burgess has emerged as another offensive weapon for Coatesville, with 7 receptions for 233 yards and three touchdowns these playoffs.

In the first meeting, West played its defensive backs off the line, looking to prevent the big plays. Ortega picked the Whippets apart for 320 yards.

“It’s pick your poison,” Milano said. “They’re gonna go empty 60 percent of the time with nobody in the backfield but Ricky, and Ricky can run. They get you in one-on-one matchups on the outside and the kind of force your hand that way. They have scary speed, so you tell kids, play them closer but don’t get beat deep, and that’s tough. They’re good at what they do and we didn’t want to get beat deep and consequently they were able to stay patient and take boundary balls a bunch.”

Coatesville’s Achilles’ heel on offense may be its pass protection. West’s defensive ends Sean Pelkisson and Max Hale were in Ortega’s face all game, and a week ago, Garnet Valley was able to get to him numerous times, as well.

After dealing with a foot injury earlier in the year, Ortega has been more mobile lately, running for 363 yards and seven scores this postseason.

“We really had to work on our protection,” Coatesville coach Matt Ortega said. “Going into that game, Ricky wasn’t an established runner so I think teams were able to tee off and rush the passer and not have to worry as much with him running the football. I think it made it even easier for teams to pin their ears back and bring the pressure. (Pelkisson) is one of the best pass rushers we’ve seen in 11 years. He’s an unbelievable pass rusher and I think at times we’re going to have to do some things differently if we’re planning to slow him down.”

It’s hard to imagine another low-scoring affair between these two, not only with the way they’ve been scoring these playoffs, but also the amount of points they’ve given up. Pennsbury, North Penn and Haverford scored an average of 36 points against the Whippets, while Coatesville has surrendered 23, on average, to Souderton, Central Bucks West and Garnet.

In the first meeting, West’s answer for a stagnant run game (105 yards on 28 carries) was using its option game a little more than usual. Having played the option-heavy Jaguars a week ago, Matt Ortega is optimistic his defense will be better prepared.

The Whippets surged to a one-point lead in the third quarter last month with two quick touchdowns, but missed out on other scoring chances. On their final drive at the end of both halves, they turned it over on downs in the red zone, and also lost a fumble near the 20.

“I feel like we left a lot of points out on the field,” Howard said. “We had a couple drives stall in the red zone. I just feel like it’s a really cool, historic matchup. Being able to play them on the biggest stage possible, it’s gonna be a really fun game.”

What’s on tap, Friday, is a rarity. Two Ches-Mont teams have never met in a district final. The amount of talent on the field, with Howard and Pelkisson and Hale and Tyriq Lewis and Alex Rosano, among others, for West, and Ortega and Bryant and John Ruttman and Jordan Engler and Shamaur Hall for Coatesville, is something to be appreciated.

Will this be the last time Ortega and Bryant ever suit up for Coatesville?

Will Howard and company finally clear the Coatesville hurdle?

For as long as this week likely felt for the competitors and communities, there are only 48 minutes of football to be played.

So sit back and enjoy. Enjoy the rivalry, but respect the rival. Win or lose, these kids are laying years of dedication and determination on the line for a moment in history.

This is the perfect encore, worthy of a standing ovation, no matter what side you’re on.

“This is our last game on Kottmeyer,” Howard said. “I couldn’t think of a better way for it to end, a district final against Coatesville.”