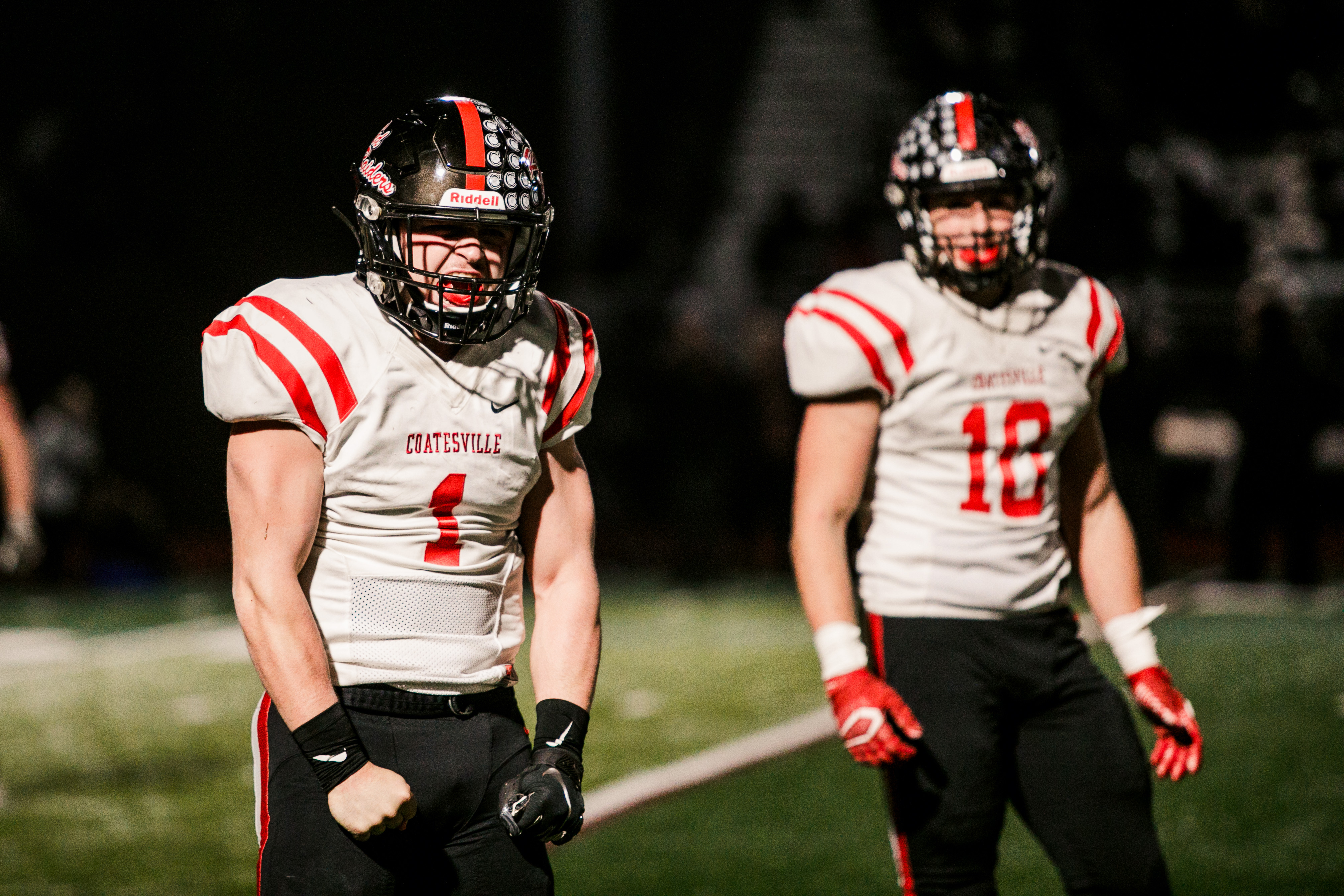 CONCORD — Following a broken femur in last year’s playoff game against Dowingtown East, Coatesville’s Matt Atwell wondered if he’d ever get the chance to play again.

Nine months of recovery went as planned, and the big offensive lineman found his way back into the starting lineup for his senior year.

Friday night, standing on Garnet Valley’s field, Atwell basked in the thought of how far he, and his team, had come.

“We had a brand new O-line and we’re really gelling,” Atwell said. “To have a chance for our third straight district title, it means the world to me because I never thought I’d be on the field again.”

Atwell’s story of perseverance and belief is fitting for this Coatesville team, who, despite losing some very big names the last two years, is back in the district finals for the third straight year.

Garnet entered the game winners of 11 straight, and burst out of halftime with two straight scores to take its first lead of the game, 27-20.

But Coatesville has been there before and it had the two most special players on the field.

“We knew they were capable of scoring from anywhere, and that’s why I was proud of our defense,” Garnet coach Matt Ricci said. “You can’t give (Coatesville) too many chances and we tried to keep the ball away from their offense.”

Coatesville’s Ricky Ortega goes up for a reception in the fourth quarter. (Nate Heckenberger – For MediaNews Group)

The Jags’ lead lasted 122 seconds of game time, as Ricky Ortega burst through Garnet’s defense for a nine-yard touchdown run.

The final 19 minutes, 35 seconds was owned by Coatesville, who got arguably Ortega’s best game of the year and a brilliant finish from Dapree Bryant.

“Ricky turned it up, the defense held it down and we got the dub,” Coatesville defensive lineman Jon Meeks said.

There was no panic in the Raiders, when Garnet jumped ahead in the third. Why would they? Ortega was 12-1 in district playoffs coming in, and adding to it seems like a foregone conclusion.

Ortega’s third rushing TD, to go with his two TD passes, not only gave Coatesville the lead for good, but put Ortega’s career TD total at 171 (125 passing, 45 rushing, 1 receiving).

For good measure, Bryant picked off his fifth and sixth passes of the season and scored his 23rd and 24th TDs of the season on consecutive drives at the end of the game.

Coatesville’s Dapree Bryant runs back an interception return for a touchdown. It was his second on consecutive drives. (Nate Heckenberger – For MediaNews Group)

“Those guys are amazing,” Atwell said. “Every day in practice they do something crazy. That trick play, the catch Ricky made, was insane. They blow my mind.”

Atwell referred to a leaping catch Ortega made in front of a defender on a pass from Bryant.

Hindsight makes Coatesville doubters look silly. Maybe it was Red Raider fatigue, maybe it was assuming the wear and tear of long postseason runs and losses to graduation would finally catch up to them.

But much like Atwell’s injury, the possibility of not fulfilling goals is the ultimate motivation.

“It means everything to us,” Meeks said. “We’ve been told we can’t do it, and we’re doing it. We’re having fun proving everybody wrong. I get one more game with my brothers, and there’s no better feeling.”

Coatesville’s Lamar Brown and Jordan Engler celebrate after a stop on third down. (Nate Heckenberger – For MediaNews Group)

There is more a fitting ending to a decade where the Ches-Mont has risen to the top of District 1 than to have Coatesville and Downingtown West play for the title. Throw away the predictions. Ignore the matchups on paper.

Coatesville is a proud champion. West is a worthy contender for the crown. To doubt either at this point would be fruitless. But after another magical run from the Raiders, just know it’s something bigger than themselves.

“This game is unbelievable because the ‘Ville mentality is real,” Coatesville coach Matt Ortega told his team.