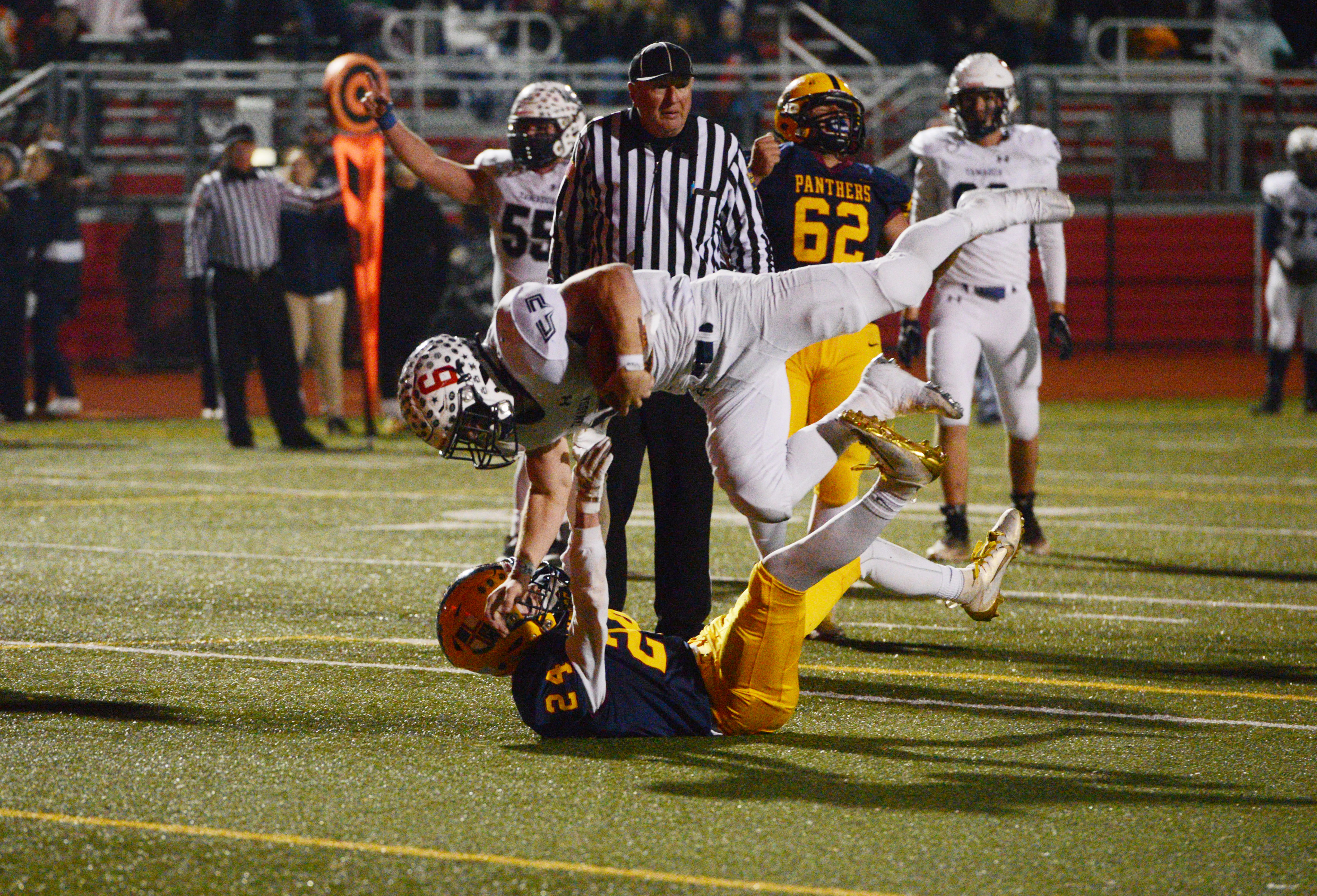 BUCKTOWN >> After Friday night’s season-ending loss, Pope John Paul II head coach Rory Graver gathered his squad at one end of the field, as he always does.

This time, he asked his seniors to stay behind so he could address them as a group one last time before they locked arms and walked off the football field together to end their high school careers.

“I love these seniors,” said Graver. “They’ve left a great legacy and should be very proud of all they have accomplished.”

Eleven Golden Panthers played their final game on Friday, as District 11 champions Tamaqua took complete control of the contest after halftime, advancing to the PIAA Class 3A quarterfinals with a 47-21 victory over PJP at Owen J. Roberts High School.

Nate Boyle led the Blue Raiders’ efficient offense with 240 yards rushing and four touchdowns, as Tamaqua’s trademark efficiency was on full display, scoring touchdowns on seven of their nine possessions.

While Graver chose to keep his conversation with the seniors private, it’s easy to imagine some of the things the coach could’ve said to the leaders of the Golden Panthers’ most successful season to date. He might have thanked the group for putting PJP’s football program – winless as recently as four years ago – on the map with their first PAC Frontier Division title this season. He could have relived the biggest win of their careers, last week’s District 1/12 championship victory over Neumann Goretti.

Or he simply could have offered his appreciation for the fight they showed on Friday night. Gray and others fought valiantly through pain and injuries until the final whistle, showing the same resilience it took to bring the program to new heights in the 2019 season.

It wasn’t enough on Friday, however, as Tamaqua turned a one-point lead into a 28-13 advantage through two possessions that bookended the halftime break. A long Boyle run put the Blue Raiders in position for a scoring strike from Brayden Knoblauch to Matt Kistler as the halftime buzzer sounded, and the visitors came out of the break with a seven-play, 63-yard drive capped by Knoblauch’s second short QB sneak for their first double-digit lead at the 8:07 mark of the third quarter.

Those three players – Knoblauch, Boyle, and Kistler – have been the heart of Tamaqua’s offense throughout the Blue Raiders’ breakout season, and Friday night was no different. The trio had a hand in 398 of the team’s 419 yards of total offense, and their contributions didn’t stop there.

Boyle emerged as the star, adding to the game-high 240 rushing yards with a 36-yard reception, three point-after-touchdown conversions, and several tackles on defense. Kistler caught four passes for 72 yards and a touchdown, rushed for another 19 yards, set up another touchdown with a 38-yard punt return, and intercepted PJP’s Gray to thwart the Panthers’ last chance at a comeback.

Knoblauch led the whole operation, throwing for 140 yards and the score to Kistler on 9-for-13 passing and adding two more scores and a two-point conversion with his legs. It was as close to a perfect offensive game as you’re likely to see this deep into the season.

“Our line is really locked in right now, and it’s carrying over to the whole team,” Boyle said.

The senior running back pointed to the Blue Raiders’ game against Jim Thorpe High in week nine as a turning point.

“If we hadn’t won, we weren’t going to make districts,” he recalled. “We locked in, played well, and we’ve maintained that mindset since.”

Tamaqua (11-2) advances into the state quarterfinals next Friday against the winner of Saturday’s District 3 title game between Middletown and Wyomissing — two of the state’s top-three teams in Class 3A.

Meanwhile PJP, PAC Frontier Division and District 1/12 champions for the first time in school history this season, saw its season come to an end at a mark of 10-3.

Aside from quarterback Gray, several other Golden Panthers made their marks in their final high school contests. Standout linebacker Justin Mitala was unofficially credited with nine tackles, adding a pair of receptions on offense, while tight end Dylan Walker had a 23-yard touchdown reception and averaged 39 yards per punt.

Andrew McDonald was a workhorse for the Golden Panthers on their opening touchdown drive, accounting for 31 of his 64 total yards as PJP took an early 7-0 lead on Gray’s three-yard scoring pass to Kormos. Matt Dobrowolski, Mark Bowen, and Sean Anderson led the offensive line, while Steve Skarbek added four receptions.

Friday night didn’t yield PJP’s desired outcome, but the accomplishments of the senior class can’t be measured accurately. Despite the losses to graduation, the Golden Panthers figure to enter the 2020 season as the team to beat in the Frontier Division and perhaps all of District One Class 3A, a position that would have been unfathomable when the group entered high school.

While Tamaqua moves on in the state tournament, the 2019 Golden Panthers left the field destined to be remembered as the team who altered the trajectory of Pope John Paul II football.