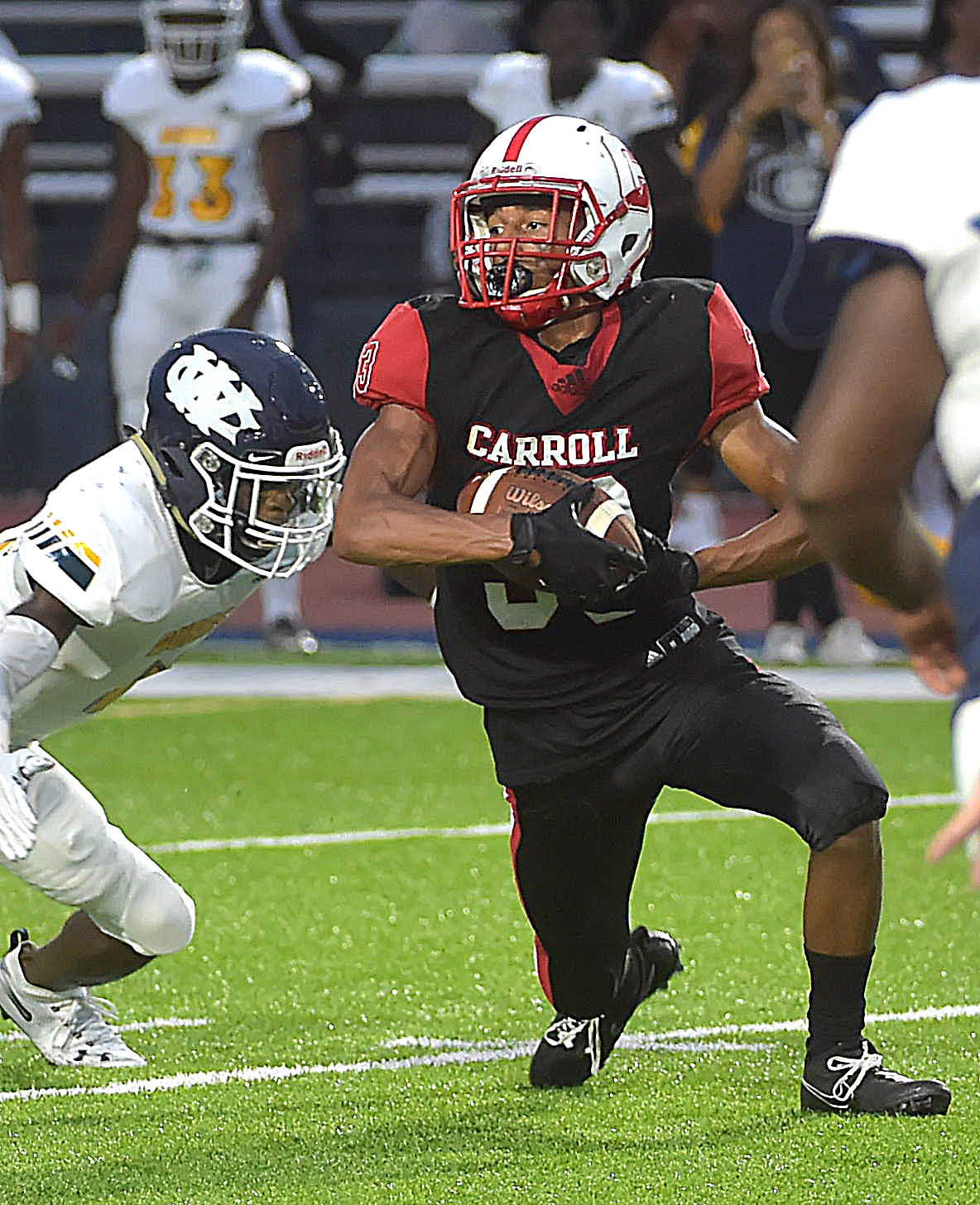 JENKINTOWN — First up was defensive tackle Gavin McKenna. Next, it was Malachi Hansen’s turn. That left only linebacker Tyler Alston.

What do they have in common? The Archbishop Carroll trio returned to the sidelines late in the fourth quarter, only to be greeted with a pounding helmet pat and a deafening scream from Patriots coach Kyle Detweiler.

“Coach Det? Oh, he comes with the energy,” Alston said.

The Patriots’ first win in their last four tries sends them into a Catholic League Class 4A semifinal meeting with Cardinal O’Hara on a positive note. Technically the higher seed, Carroll (5-5, 4-3) will visit the Lions on their turf Friday night.

“It’ll be a different game this time, we know that,” said Hansen, “but it’ll be a good game.”

Archbishop Carroll converted those fourth-quarter stops on defense into two touchdown drives. That was more than enough to hand Bishop McDevitt its fourth loss in its last five games.

A 51-yard reception by Mike Dempsey set up a scoring connection between quarterback Nick Lamey and receiver Matteo Santoleri, helping Carroll reestablish the lead, at 19-14, with 7:10 remaining.

On McDevitt’s next play, McKenna pounced on a fumble by Lancers quarterback Lonnie Rice. Four plays later, Brennan Robinson found the end zone on an eight-yard rush to make it a 26-14 Carroll lead.

Hansen tracked down a deep ball from Rice to account for yet another forced turnover by the Carroll defense. And Alston’s interception of Rice accounted for three turnovers in a five-minute span. Alston capped it with a three-yard scoring run.

And after each one of those turnovers, it was Detweiler celebrating the loudest on Carroll’s sideline.

“I try to bring it so they can feed off of it,” the coach said. “It’s supposed to be a fun game. There are different ways to harness and handle that fun and energy. But we needed this game.”

Late in the second quarter, McDevitt’s defense had stopped Carroll on three straight tries from inside the 5-yard line. On fourth down, after Detweiler spoke to his guys on the sideline for a minute, the Patriots’ Brennan Robinson went right on a handoff from Lamey to reach the end zone.

“For the first three plays, they were loading the box a lot,” Robinson said. “We knew we had to stretch it and go outside, and that worked for us.”

Robinson, on a crossing route, reeled in a 26-yard pass for a first down just across midfield. Only seconds prior had Detweiler deliberately allowed time to come off the clock before signaling for a timeout.

“Yeah,” Robinson said, “it was kind of a weird way that worked out.”

Robinson’s catch gave Carroll’s drive new life. Catches from Robinson and Malachi Hansen got Carroll to the 1-yard line with 11 seconds remaining. Twice, the Patriots tried to punch it in from the doorstep. They were denied once, and nearly kept out again. Lamey fumbled what had been intended as a quarterback sneak. Alston picked up the bouncing ball and surged through the line for the touchdown.

“Whatever it takes,” Alston said.

Rice, despite the turnovers, had a balanced outing under center for McDevitt. He turned in 121 yards passing and 43 yards on the ground. He accounted for both of the Lancers’ touchdowns, too. Rice’s 14-yard connection with Emmanuel Sia (four catches, 72 yards) staked McDevitt to a 7-0 lead in the first quarter. In the third, his eight-yard rushing score—on which he plowed through two would-be tacklers to rumble into the end zone—gave the Lancers a temporary 14-13 lead.

There wasn’t much more on which McDevitt (3-6) could hang its hat. They will head into the District 11/12 playoffs next week against an opponent to be determined.

Carroll has gone the last month with starting quarterback Russell Minor-Shaw and tight end Darryl Simpson. Both are questionable for next week.

“We’re fixing potholes everywhere you look,” Detwiler said, adding that the defensive line that started Week 10 is entirely new from the one that occupied the Week 1 depth chart. “It’s OK, we’re ready.”