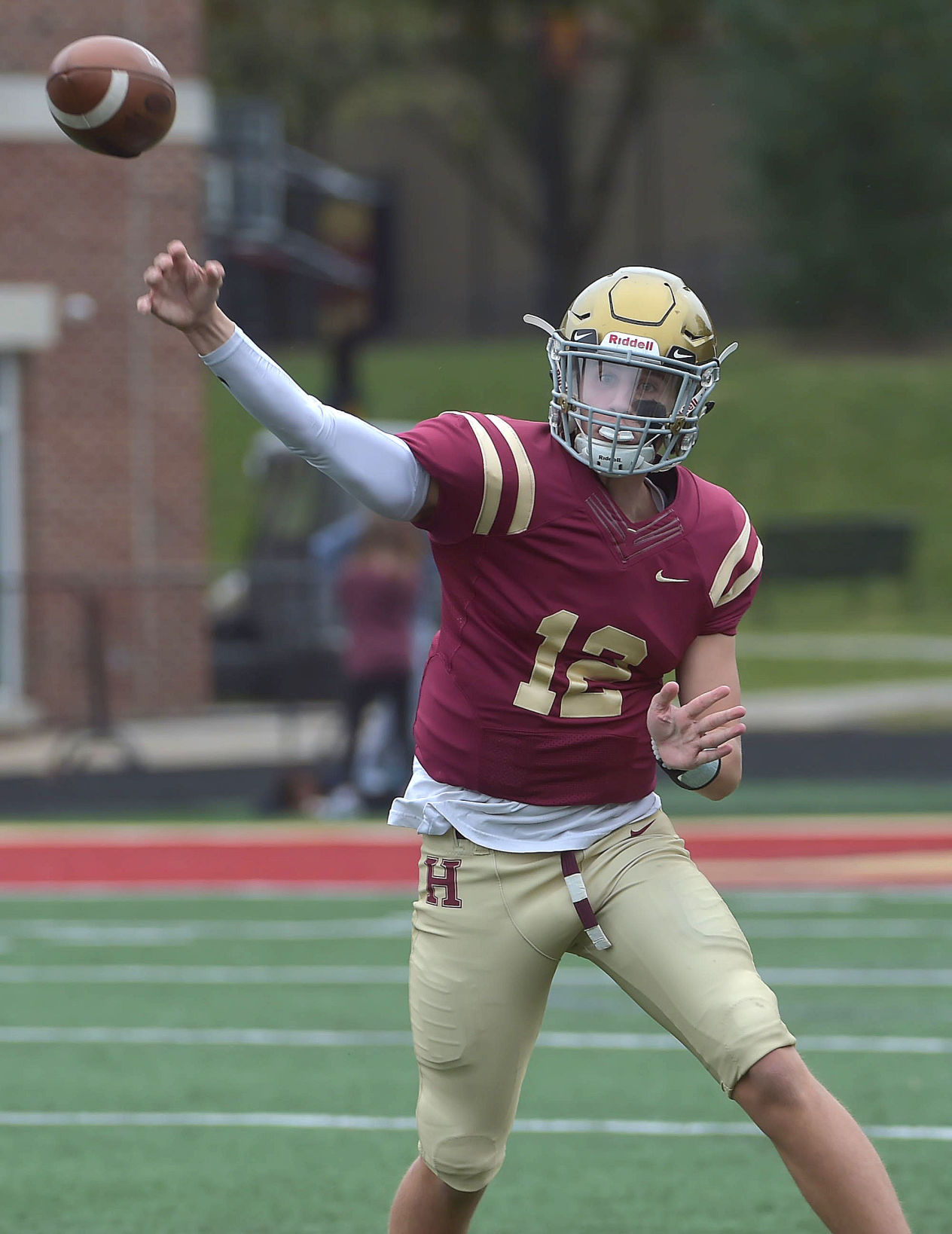 Perri threw a pair of touchdown passes in the opening six minutes of the second half, helping the Fords to a 39-10 Inter-Ac League victory over the Quakers in a game that was tied at halftime.

Daiyaan Hawkins (15 carries for 154 yards) ran 34 yards for a Haverford School touchdown in the first quarter, and Chris Clark’s 34-yard field goal 1:42 before halftime tie the score at 10-10.

Before the game began, Perri was one of 16 senior players saluted by their coaches, teammates and families as they donned a home jersey one last time.

For the next two weeks, Haverford School (5-3, 2-1) will have tall tasks, going on the road to close out the season with contests against Malvern Prep and Episcopal Academy.

“We did what we did today for our seniors,” said junior Chris Sims. He had a big day, making a pair of interceptions and catching two of Perri’s passes, the second resulting in a 27-yard scoring play that broke a 10-10 tie three minutes into the second half.

Sims had picked off a pass four plays before he made his touchdown catch. Two minutes after he scored, junior Geordy Holmes sacked Penn Charter quarterback Kyle Jones, forcing a punt by the visitors. On second down, it was Perri to senior Jake Spencer for 51 yards and six more points.

“I didn’t have that good of a start today,” Perri said. “Those two sacks (in the opening half) were on me.”

He also made a bad backward pass early in the second quarter that resulted in a turnover that helped Penn Charter (5-3, 0-3) to its only TD, an 18-yard pass from Jones to Matt Marshall.

“We went into halftime in a tie game,” Haverford School coach Mike Murphy said. “We knew there were some things we wanted to do and we got them done in the second half.”

After failing to connect on his first pass of the third quarter, Perri put his next two tosses right into the hands of receivers who were on their way to the end zone.

Haverford School’s (4) Daiyaan Hawkins runs for a touchdown in the first half against Penn Charter.

“The receivers really helped me in the second half,” Perri said. “And our line did a good job.”
Jack Schlegel, Isaiah Boyd, Michael Gavin, Kwaku Adubofour and Michael Barr were among those providing protection for Perri as well as holes for the Fords backs to run through.

After his two scoring passes, Perri didn’t have to put the ball in the air much the rest of the way. On the final play of the third quarter, Sims came up with his second interception, which led to a 27-yard TD run in the opening minute of the fourth quarter by junior Mekhi Ajose-Williamson. Patrick Toal dove over the right side of the line for a two-point conversion.

“It was like it was 0-0 when we came out after halftime,” Sims said. “We knew we had to put it on the line if we wanted to win this game. We knew they would try to take shots throwing the ball down the field. We had to stay with them, and if the ball came our way go up and make the play.”

Less than a minute later, Samir Gardner added his name to the list of Fords players with interceptions, and Haverford School ran five minutes off the clock before Gardner scored on a short run.

“We’ve got two big games coming up,” Murphy said. “But it was good getting a win like this today.”

Carroll snaps skid on strength of determined defense
Stevenson, Chester go out on highest of notes