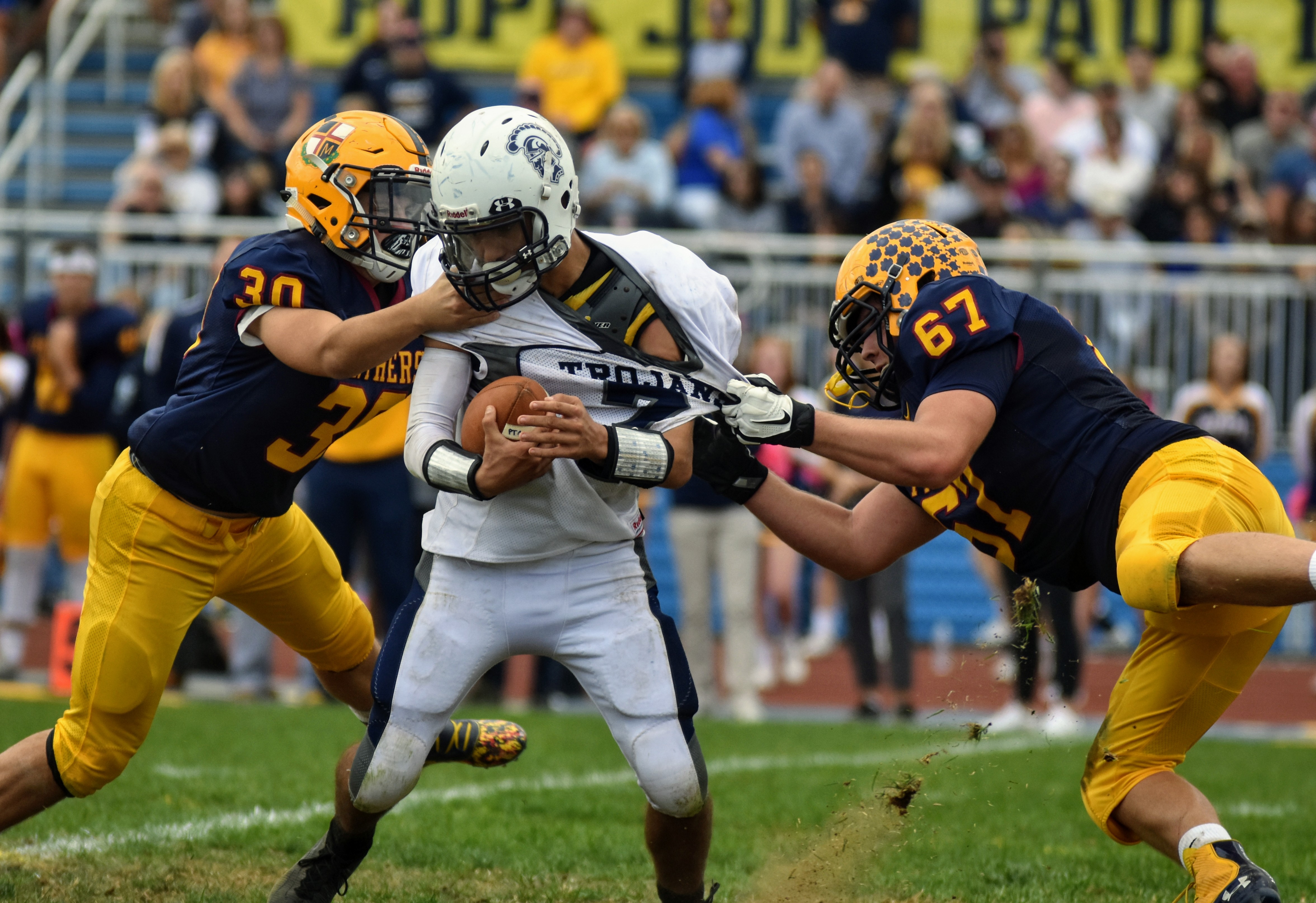 The hard-hitting defensive battle remained scoreless until PJP (4-0 Frontier, 7-1 overall) scored on a 27-yard touchdown pass from Kamal Gray to Steve Skarbek with 2:03 remaining until halftime. The Golden Panther defense held Pottstown (1-3, 4-4) to 22 total yards in the second half.

“Pottstown is a really well-coached football team,” said Pope John Paul coach Rory Graver. “You’ve got to give them credit. I’m happy with the way we adjusted in the second half. The defense was awesome. We got a couple turnovers and that was the difference. The defense and special teams stepped up for us.”

“We let our emotions take over,” said Pottstown coach Jeff Delaney. “Put us in a spot, and that’s what happened. The kids played very, very hard. We made them work for every point, which was the goal.”

The Trojan defense stopped the Panthers inside the Pottstown 10-yard line twice in the first half, once when an eight-yard run by Gray fell one yard short of the goal line and the other when a pass from the four fell incomplete.

An interception by Jonathan Oister stopped the hosts again early in the second quarter. But PJP took over at the Pottstown 40 late in the half on a punt block by Justin Mitala, and the Golden Panthers scored three plays later when Gray fired over the middle to a wide-open Skarbek in the end zone.

Then the Trojans fumbled the second-half kickoff and the Golden Panthers drove 32 yards on six plays, with a 10-yard TD toss from Gray to Daylin Gooden boosting the lead to 12-0.

“The fumble didn’t help,” said Delaney. “But it wasn’t that. It was the next plays when they scored quickly. It’s the momentum swing.”

PJP drove 57 yards on its next possession, scoring on a 20-yard TD reception in the right corner of the end zone by Justin Kormos and scored again two plays after an interception by Rocco DiRico on a 17-yard run by Gooden.

Then DiRico picked off a pass on the Trojans’ next series of plays and Pottstown did not make it past its own 20 the rest of the way.

“The advantage for us is to run the ball, pass the ball, run the ball,” said Delaney. “We don’t want to get in a situation where we have to pass all the time.”

The Trojans wound up with just 88 total yards, only 20 on the ground and 68 through the air on 8-for-17 passing by Joneil Oister. Gooden led the PJP rushing attack with 55 yards on 11 carries and Gray passed for 98 of his team’s 243 total yards.

“Offensively, we were not sharp today,” said Graver. “We didn’t block up front in the first half. The good thing is, our guys are resilient. We made adjustments at halftime and came out and played much better in the second half.”

Pottsgrove had won the Frontier Division all three years since the league divided into two divisions. The worst that can happen now for the Golden Panthers is a tie for first if they lose next week and Pottsgrove (3-1) wins, but they would still earn the title and a berth in the PAC championship game by virtue of their 28-3 win over the Falcons.

Graver, however, was only concerned with next week’s away contest.

“Our focus, just like every week, is going to go to Upper Merion, which is a really good football team,” he said.