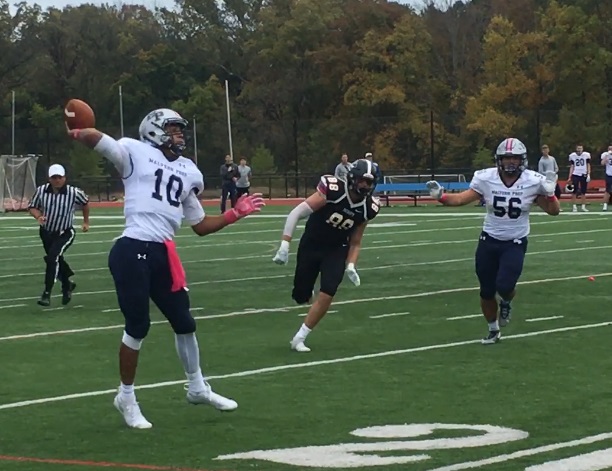 If the passing game is off, White is just as comfortable shifting to a run-heavy game and vice-versa while commanding the team’s read-option. Of course, there are days like Saturday where it’s all there and that’s when White and his offense truly get a chance to shine.

Led by a stellar day from White and a robust defense, Malvern Prep topped host Germantown Academy 33-21 to open up Inter-Ac competition.

“We played all these tough teams and it just prepared us for today,” White said. “Now, we see what we can do from here.”

White amassed 133 yards on the ground with a rushing touchdown and completed 9-of-16 passes for 134 yards and two scores. It was his ability to extend plays with his legs that played a key role on both touchdown passes as White eluded defenders in the backfield then found open receivers in the end zone.

The longer defenders have to play coverage, the harder it gets to keep tabs on receivers and where they’ve gotten to on the field. With White’s ability to elude tacklers, it gave his guys more time to shake defensive backs and get his attention when they found space.

“It starts with my o-line, they did a heck of a job blocking,” White said. “I was able to get the ball out quick and get some yards.

“We work on it a lot in practice, run the scramble drill, create new routes and those guys find a way to get open.”

The host Patriots (4-1, 0-1 league) had the stronger start, scoring on their second possession and converting a two-point try for an 8-0 lead after a quarter. However, the Friars  (2-4, 1-0) had been working on a drive as the period closed and they finished it off with a touchdown when White scrambled and found John Gordon on a 21-yard pass early in the second quarter.

White credited the toughness of his offensive line for keeping GA’s talented defensive linemen at bay and felt Saturday’s performance was a preview for what the rest of the Inter-Ac season will look like for the defending champions.

“It just fired us up and made us believe, that’s all it really did,” White said. “We just took over. The linemen were fired up, they worked their butts off today.

“That’s what we can do and I think we’re going to continue that.”

Malvern Prep scored twice in the final two minutes of the second quarter, going up on a 12-yard run from Isaiah Wright, then getting two big pass plays from White to Tyler Tinson including a 19-yard touchdown to take a 19-8 lead to the break.

Just as crucial as the offense feasting on its momentum was the defense firming up to slow down the Patriots. Between the TD drives, Malvern Prep forced a three-and-out in about a minute of game time and was pushed by a strong effort from its defensive front.

“We’re moving, we got our hands out there and we’re doing pretty well,” Friars lineman Coltin Deery , who forced a fumble, said. “That’s one of our biggest things, stopping the inside run. We have such big guys up front if we get our hands up, we’re shutting them off and making the tackle right up front.”

Deery, who plays defensive tackle and also on the interior of the offensive line, was a force on both sides of the ball and end JT Roberts was equally disruptive on the defensive side.

Malvern got the second half kick but a stand by GA’s defense allowed the Patriots to get the ball back and manufacture another touchdown drive. Germantown Academy got a lift from the return of running back Trae Vance, who made his season debut after sitting the first five games with a shoulder issue.

Vance had a late touchdown and recorded 51 rushing yards, including a couple good carries on the drive that ended with Jordan Longino finding Jerry Griffen-Bachtler for a 17-yard score to cut the lead to 19-14.

“It felt pretty good to run the ball again but it’s always disappointing to lose like this,” Vance said. “We had the mindset we were going to win. Sometimes, things just don’t go right but overall, I felt good coming back for my first game and especially with it being an Inter-Ac game.”

Vance and linebacker Luke Strauss, both seniors, said the loss was frustrating but not the end of the line. The Patriots know they made mistakes on both sides of the ball and need to get better this coming week, but they adamantly believe there’s enough talent on the roster to still contend for a league crown.

Offensively, Vance didn’t want to pin blame on any one group instead saying everyone needs to play better next weekend. He also felt the team lost some of its composure after Malvern’s first score and they lost the edge that had allowed them to score first and play with aggression.

“Next time, we have to keep the momentum going all the way through because I feel like we could have had this game,” Vance said. “It definitely gives us that motivation to work harder. I told the team just because we lost one game, it doesn’t mean we have to lose the rest.”

Strauss and defensive linemen Jeff Decker were all over the field but Strauss noted the coverage can’t afford to break down the way it did at times on Saturday.

The senior linebacker said this is the closest team he’s been on in his time at GA and he’s even started driving some of his younger teammates home after practices and workouts. While the Patriots play some underclassman, the senior said they’re not scared and he was eager to get back on the field next week and clean up the mistakes from Saturday’s loss.

“The Inter-Ac is totally balanced, I mean (Malvern) was 1-4 but they’re just as good of a team so there’s talent all over and I don’t think a 5-0 team is going to win this league,” Strauss said. “You try to win out and see how the rest of it unfolds.”

After GA got within five, the Friars turned an interception from defensive back Caimin Hayes into a six-play drive capped off by a 12-yard run from White. The quarterback accounted for all but eight of the 41 yards of the drive.

“When I engage a block I know Lonnie is behind me and I think magic can happen,” Deery said. “I think today he showed that.”