Higson, Haverford up their relentless game against Ridley 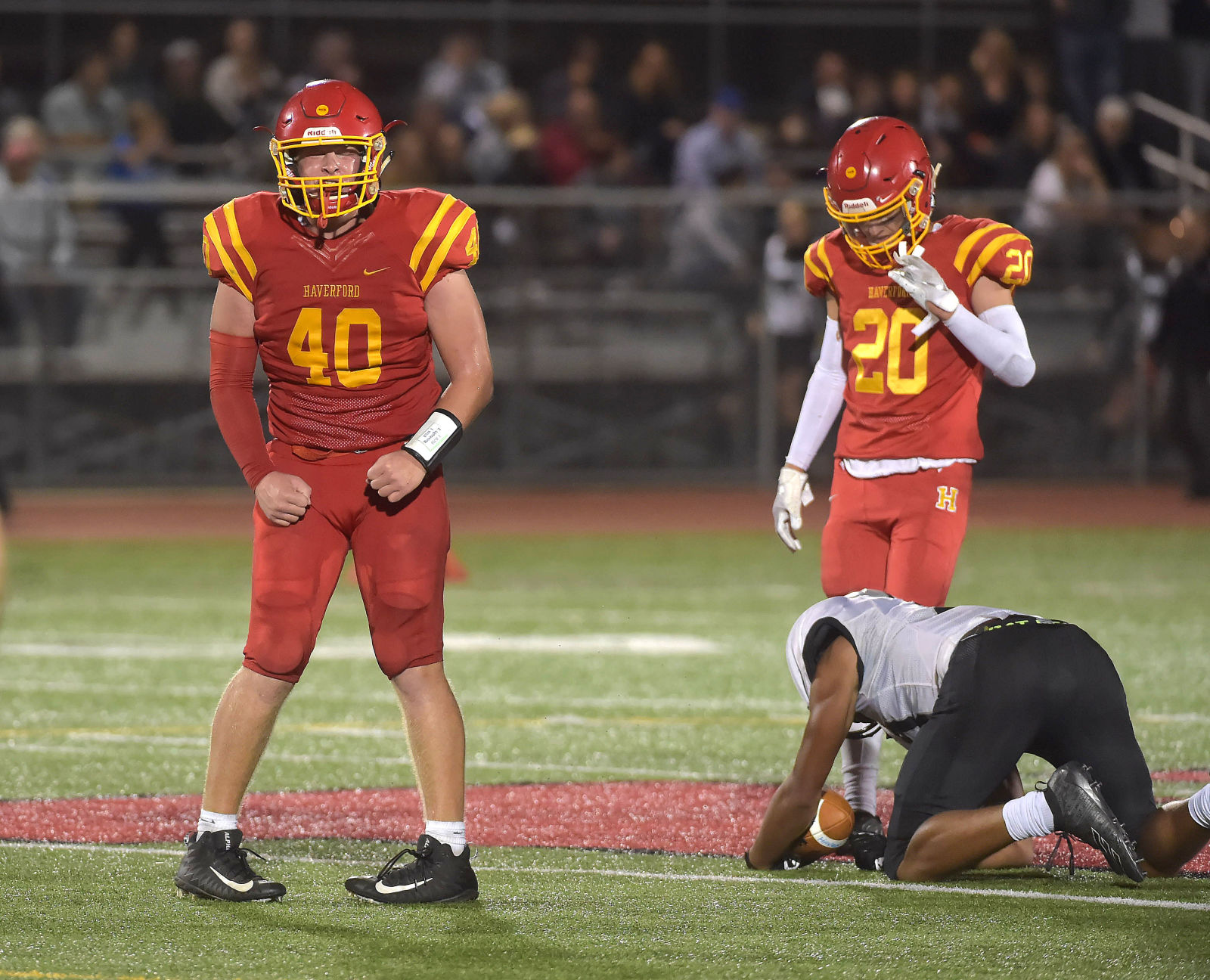 Will Higson (40), pictured in a game against Strath Haven earlier this season, led the way on defense in the Fords' 44-14 shellacking of Ridley Saturday night.

The Fords dominated a game Saturday that was supposed to be competitive. And it all started with senior linebacker Will Higson, who was busy chasing down ball carriers desperately seeking shelter on the sideline.

The ‘Ridley game,” as the Fords referred to it as, was as one-sided a ballgame as you’ll see at the high-school level.

Haverford’s defense wreaked havoc on the way to a 44-14 win. After losing two straight games to begin the season, the Fords have reeled off six victories in a row.

Ridley was the victim of a relentless attack. Haverford’s first-team unit, which stayed in the game until the end of the third quarter when the score was 44-7, allowed only 58 yards and zero points.

“It’s a mentality thing to them,” said sensational senior quarterback/defensive back Trey Blair, who electrified Phil Marion Field with his speed, deke moves and general overall talent. “I don’t think we’re the biggest guys in the world, but we play like we’re the biggest guys. … Everybody is full of speed at all times.”

Higson posted at least double-digit tackles and had a sack of Ridley quarterback Jack Grace.

“How we played tonight, our defense has been like that all year,” Higson said. “We’ve started to really pick it up recently. We’ve had three shutouts in the past five weeks and I think we have one of the best, if not the best defense in the county. We want to play one-way, that’s our message. We want to give it our all every single play and make sure everybody is doing their jobs.”

“It was a game that was circled when the schedule came out. We still have a sour taste in our mouths from last year when they came on our turf and kind of nipped us in the bud,” Blair said. “The goal was to come here and do the exact same thing to them on their field and worse, if possible, and I think we got the job done.”

The excitement began for the Fords when Blair exploded down the Haverford sideline 68 yards to the end zone with 7:30 left in the first quarter. Ridley’s defense hung tough for most of the first half. But special teams was a different story.

Blair, who plays every snap whether it’s offense, defense, punting or returning, lined up around the 50-yard line to field a punt. Seven seconds later, he was dancing in the end zone, celebrating a 48-yard touchdown return that put Haverford ahead 14-0.

After halftime, it was all Haverford. The Fords scored three touchdowns in the span of 80 seconds. The University of Buffalo-bound Blair engineered a six-play drive to start the second half, which was capped off by another touchdown run. Jimmy Wright then intercepted Jack Grace and returned the ball to the 5-yard line. One play later, Wright was in the end zone, the first of his two touchdown scampers. On the ensuing kick, Sean Reynolds recovered a fumble and returned it 20 yards to make it 37-0.

“We are playing really good football and everybody is believing in themselves right now,” Higson said.

Wright busted through the line of scrimmage late in the third quarter and sprinted 85 yards for Haverford’s final score of the night.

Ridley’s only two thrills came when Dylan Staley took a kick 85 yards to the house, ruining the Fords’ shutout bid. In the fourth quarter, Staley darted 67 yards to pay dirt. He finished with 97 yards on 10 carries.

By then, Haverford’s impenetrable work on defense was done. As a team, the Fords are not.