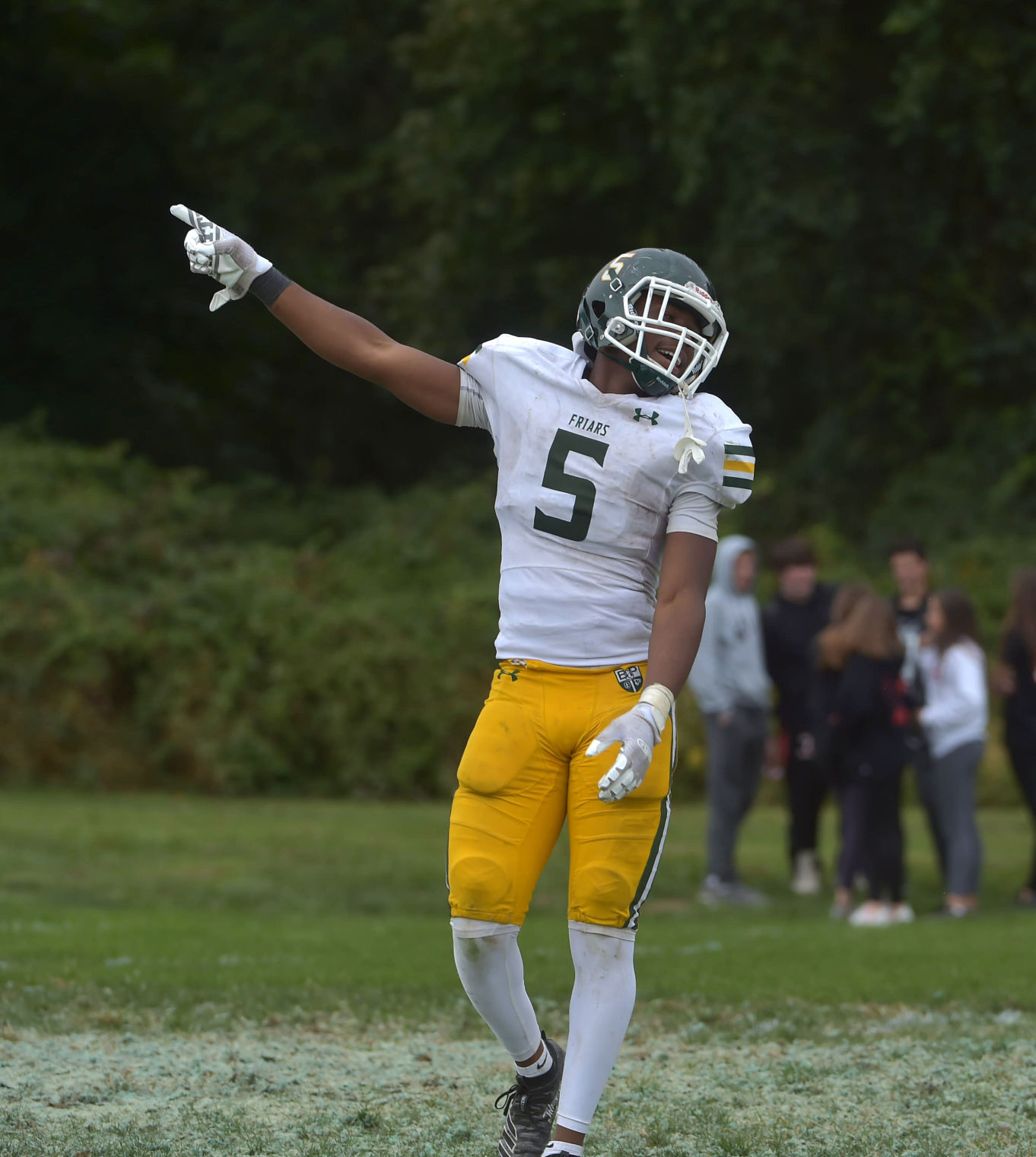 Bonner-Prendie's Oscar Uduma signals the latest advancement for his Friars team Saturday as the final seconds of a 12-7 victory over Archbishop Carroll tick away. (PETE BANNAN/MEDIANEWS GROUP)

RADNOR — A year ago, Jack Muldoon had very little to celebrate.

After games, in which his Monsignor Bonner-Archbishop Prendergast team would most likely end up on the wrong end of a lopsided score, he would rather talk about officials not protecting players than the failings of his team.

Nowadays though, he’s dancing with his players on the field after the game.

“It’s a lot different feeling nowadays, I can tell you that,” Muldoon said Saturday following the Friars’ 12-7 victory over Archbishop Carroll in a critical Catholic League Blue Division tilt.

It wasn’t a pretty game by any means. Both teams struggled to move the ball in the first half. There were too many penalties. The teams combined for 37 plays that went for zero or negative yards.

Quarterback Kyle Lazer only completed five of his 15 pass attempts, but four of them were crucial and put the Friars in position to win the game.

“We couldn’t seem to play fast today,” Muldoon said. “But that’s what Kyle does. No matter what he does he finds time to be the star. Whether he’s bowling or throwing darts, or we need a big play on the football field, he comes through at just the right time.”

Lazer’s first completed pass was on a beautifully executed screen pass to Charles Ingram III. It netted Bonner-Prendie 37 yards and got the Friars into the red zone for the first time in the game. Five plays later Oscar Uduma powered into the end zone from a yard out to give them a 6-0 lead.

After the Patriots took the lead on a pass from Nick Lamey to Malachai Hansen just before halftime, Lazer’s third completion was for a touchdown, hitting Armon Mapp with an eight-yard score to cap the game-winning drive on the final play of the third quarter.

Earlier on that same drive, Lazer got the Friars into the red zone again with a 27-yard run.

Later in the fourth quarter, Lazer’s final completion, a 22-yard pass to Daniel Johnson, converted a key third down with the Friars deep in their own territory and allowed them to milk four minutes off the clock and play a field position game with Carroll, one which the Patriots could not overcome.

“We weren’t the best on offense today, but when we needed it we pulled through,” Lazer said. “We wouldn’t have had a chance to do that if it wasn’t for our defense, though. They were awesome today. They’re the best defense in our division and they allowed us to have enough chances to make enough plays to win.”

PETE BANNAN – MEDIANEWS GROUP
Bonner-Prendie’s James Welde, left, hauls in a pass ahead of Archbishop Carroll’s Tyreese Walker in the fourth quarter Saturday. The Friars went on to a 12-7 victory.

Lazer was right. The Friars’ defense was in Lamey’s face all afternoon. They also blew up any semblance of Carroll’s running game. The Patriots had 15 plays that resulted in negative yardage.

“Up front, we’re about as competitive as any team,” Muldoon said. “We have a really good front seven and our front four is outstanding.”

Bonner-Prendergast held Carroll to just 56 yards of total offense in the game.

“The game is won and lost in the trenches,” Patriots coach Kyle Detweiler said. “When push came to shove they made the plays in there and we didn’t.”

The Friars move on to a showdown with Cardinal O’Hara next week in a game that will determine a bye in the Blue Division. A win against the Lions and Bonner-Prendergast will complete a stunning turnaround from one year to the next.

“It feels really good because we only won three games overall the last two years,” Lazer said. “To have a chance to get the bye and be the best team in our division is crazy, but it’s brought a lot of excitement to the team and our school in general. It’s really cool to see.”