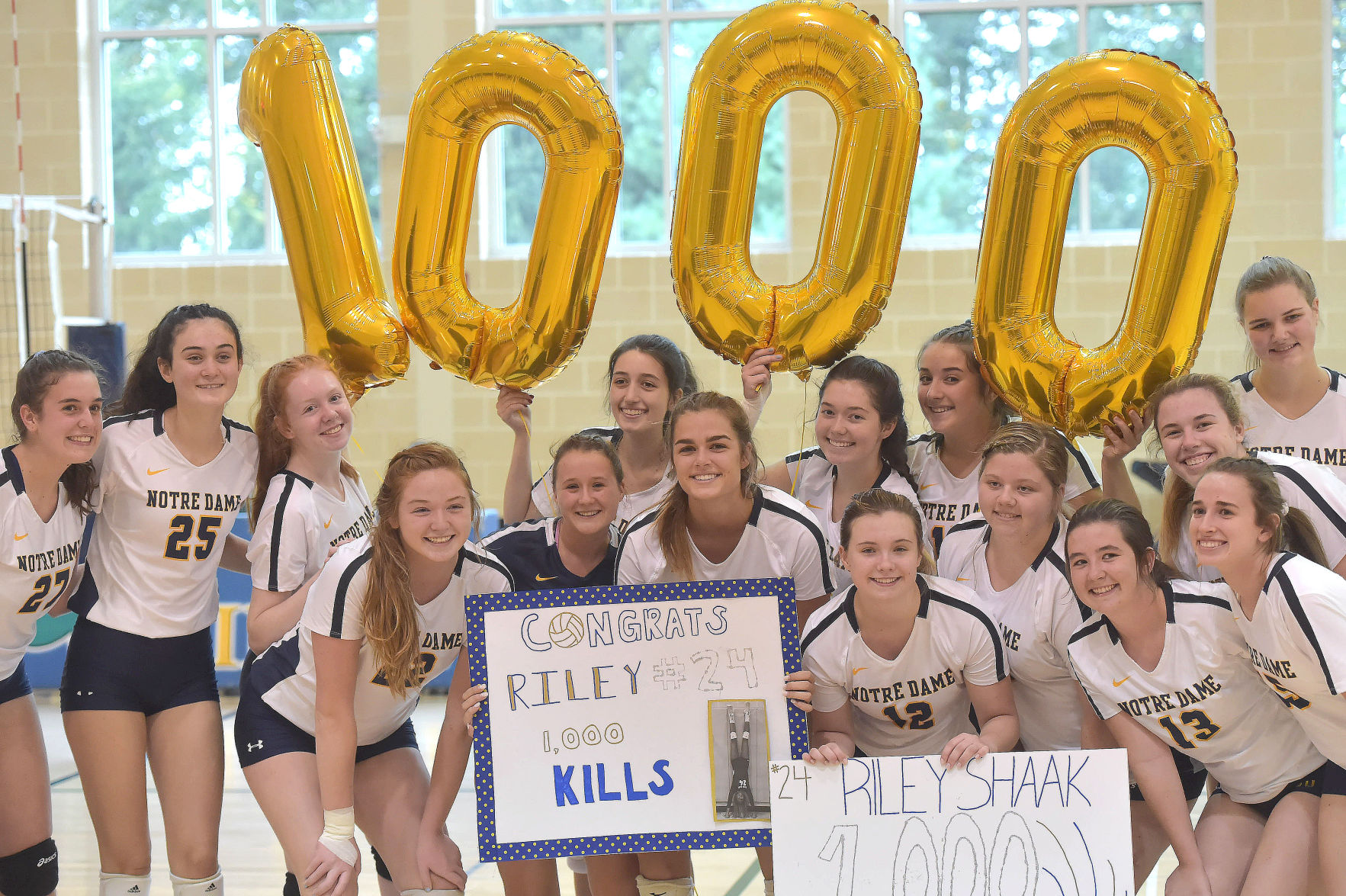 RADNOR — Riley Shaak wasn’t the only one who was nervous before Notre Dame’s nonleague volleyball match with Merion Mercy Wednesday afternoon.

The entire team was a bit anxious.

Blame it on the circumstances. The All-Delco senior and North Carolina State commit needed three kills to become the first player in program history to reach 1,000 kills in a career, and every one of her teammates were caught up in the moment.

They wanted to get it just as much as she did.

Shaak got two kills early and then had to go through several rotations before she got the one she needed to take her place in history.

“You could see that there were five service errors leading up to that,” Notre Dame coach Mike Sheridan said. “The kids were so keyed up and wound up about it. It was interesting.”

Her family was edgy, too, although they did their best to hide it.

“I wanted to give it to her right away,” junior setter Christine Covello said. “She deserves it. The number three was pounding in my head. I was thinking, ‘I need to get it to her.’”

The Irish eventually settled down and helped Shaak reach the milestone in the first set of a 3-0 victory over the Golden Bears at Aimee Willard Gymnasium.

The history-making kill came on Shaak’s fourth swing off a perfect assist from Covello and touched off a wild celebration that lasted several minutes and included balloons, smiles, hugs and pictures.

Her teammates stormed the court as soon as the ball hit the floor, and the crowd roared its approval as her father, Mike, exchanged a high-five with his younger brother, Jamie. Mike then shared a moment with his wife, Diane.

“It was very exciting,” Riley Shaak said of the history-making kill. “I felt like I accomplished something great and got where I wanted to be, a goal that I really wanted and I’m glad that it actually came through.”

Her teammates were just as happy.

The day, though, belonged to Shaak. She had an ear-to-ear smile as she posed for more pictures after the match with teammates, classmates, friends and family, which included her maternal grandparents, Jim and Ann Reilly, and cousins Carter and Ella Shaak, in addition to her parents and uncle.

The show of support was a little overwhelming.

“I almost started crying,” Shaak said. “I could not have done it without (Covello) and all the people in the back row and all my teammates who have been so supportive and great. It was amazing.”

Shaak’s road to 1,000 kills began when he decided to give up basketball after her freshman year at Notre Dame, a big move considering her family lineage. Mike was an All-Delco basketball player as a senior at Ridley in 1986 and went on to play at Saint Joseph’s University. Her uncle Jamie also played basketball for the Green Raiders and at Cabrini.

“I like volleyball more because I feel it’s more of a team sport,” Riley said. “I feel basketball, one person can score the ball, but volleyball you need your other teammates, you need other people to help you. I like the team camaraderie in volleyball.”

That same family feeling is what led Shaak to choose N.C. State over Duke, Miami and Virginia.

“It’s an awesome volleyball program and a school with great academics,” Shaak said. “I love the coaches and I love the girls on the team. They’re just awesome people.”

Now that she has the kills milestone out of the way, Shaak and her teammates will turn their sights on keeping their Inter-Ac League and PAISAA championship streak alive. The Irish have won the league title five years in a row and the PAISAA title the last six years.

Repeating won’t be easy. Germantown Academy is 11-0 overall and 4-0 in the Inter-Ac, in sole possession of first place. The Patriots also own a 3-1 victory over the Irish. The teams meet again Oct. 22 at Notre Dame to close out the regular season. Even though Notre Dame has ground to make up, Shaak is confident the Irish have what it takes to keep their championship streak alive.

“Aside from volleyball, we’re best friends and we’re very close on that level,” Shaak said of her team. “And it helps with our play on the court.”