Episcopal Academy’s football tech droning on into the future 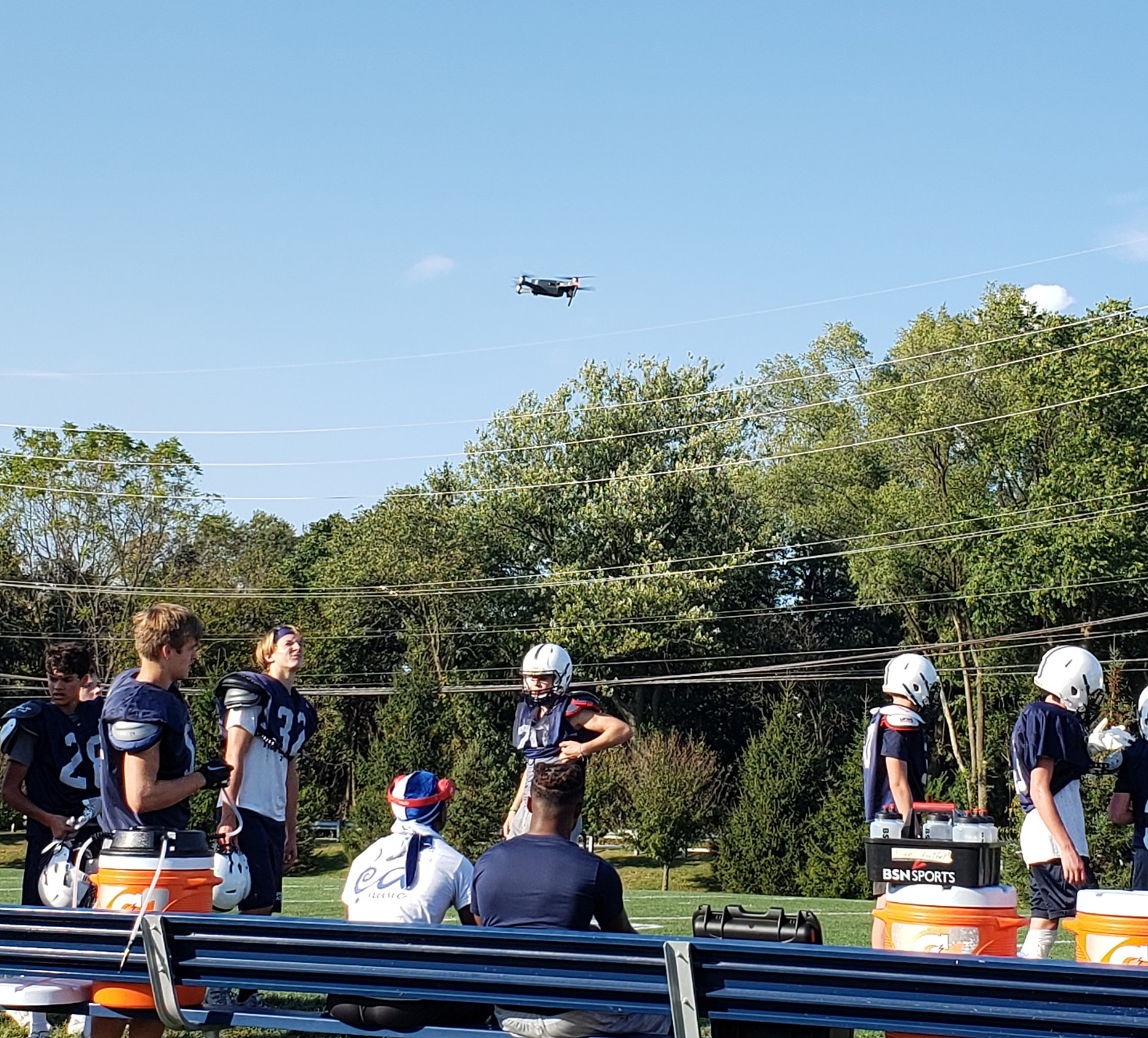 A quadcopter drone takes off above the Episcopal Academy football team at a recent practice session. The team is using drones to capture practice and game action from a new vantage point. (Submitted photo)

NEWTOWN SQUARE — Even with his helmet on the ground and his jersey loose around the shoulder pads, William Goodman can be the busiest person at an Episcopal Academy football practice.

Goodman’s purview doesn’t include the thudding on the field. But he’s still dialed into the action, reacting as periods of 11-on-11 scrimmage move up and down the grass field nestled between Route 252 and the school tennis courts.

Instead of homing in on the ball each snap, though, the freshman manager is one of several Churchmen tasked with operating the program’s drone, a unique vantage point to film games and practices.

Episcopal Academy freshman William Goodman brings the football team’s quadcopter drone in for a landing during a recent practice session. The team has used the drone to film practices and games from a drastically different vantage point.(Submitted photo)

The technology, though it sounds futuristic, isn’t all that complex. Equipped with cameras and easy-to-operate software — and put in the hands of students raised on technology with a seemingly unending intuition for tech — Episcopal Academy coach Todd Fairlie says the drone is about as easy as using a cell phone to film, only with the camera hovering 100 feet in the air.

“For practice, it’s a great tool,” Fairlie said. “We used to have to set up our end zone camera every day and get up in the pressbox. Now, for how affordable it is, it’s pretty convenient. It basically flies itself in a lot of ways. The view is unbelievable, and it really allows us to understand spacing and get great footage every day.”

EA’s version is a Mavic Pro drone, a plug-and-play quadcopter that uses a tablet or smart phone as a controller. Using onscreen tools, all that’s required is setting a hovering location, adjusting the camera angle and hitting start/stop recording. Simple as that.

Drone filming requires less constant attention than a stationary camera operator. No more needing to pivot the camera to zoom or keep action in frame or preserve meaningful depth. No more making tradeoffs on perspective, choosing either the distortion of the sideline or the distance from half the action from the end zone.

About the only limit it has is battery life, about 25 minutes per charge, with multiple removable batteries. And lest there be paranoia about drones falling from the sky onto innocent helmeted heads, the drones are programmed to return to their launch site when power levels drop to critical.

But up in the air, the perspective is truer, with an ability to customize it.

“Spacing is a game-changer in terms of seeing the field,” Fairlie said. “Whether it was from behind or from the side, you never got a true look at spacing, from hash to hash or sideline to sideline.”

Drone filming is safer, since it doesn’t require someone to ascend to a height. It changed which field EA could use: The practice field used last week was a non-starter for practices that Fairlie would’ve wanted to film since there were no stands to climb. And instead of flipping sides of the ball to get certain angles on the offense or defense, or having to confine the action to one small part of the field near the camera, moving the camera is as easy as a swipe of a joystick.

“It’s different because you see literally everything,” EA senior linebacker Matt Bush said. “When you have the tight film on the sideline, sometimes the camera messes up and you won’t see certain things, but there, it’s literally all there.”

Fairlie got the idea last year after viewing Villanova’s practice footage at a camp. The angles were mesmerizing and, more importantly, likely to be enlightening for his players.

But the systems don’t come cheap. Mavics list for between $1,000-$1,800 on Amazon, plus batteries and the iPad to operate them. But they aren’t far outside the budgets of a lot of schools. Fairlie and the football parents did a fundraising drive to purchase theirs.

When Fairlie used it over the summer at a 7-on-7 workout with Ridley, Green Raiders coach Dave Wood’s interest was piqued. They’ve purchased a system but haven’t gotten it up and running yet, short on time to tinker once the season got started. Haverford School also has a system that it utilizes for games and practices.

Fairlie lists dozens of teaching points culled from the video. Quarterbacks can see defensive schemes differently. Running backs can watch holes develop. Defenders can understand the blocking tendencies of opposing linemen. Bush, for instance, drew upon game footage to understand how to cover more ground by adjusting his positioning.

For now, Episcopal can use the drone in ways its PIAA counterparts cannot. The PIAA’s Policies and Procedures Handbook was updated in 2016 to include a prohibition on using drones “above the competition surface or spectator areas during interscholastic Contests, Inter-school Practices and Scrimmages.” Drones also cannot be used to scout opponents but can be used for a school’s own practices, provided that drone usage complies with local laws.

Drone oversight nationally falls under the Federal Aviation Administration, which regulates drones as unmanned aerial vehicles (UAV) with a patchwork system of guidance lagging well behind the technology. FAA regulations include limits on weight (55 pounds), altitude (400 feet) and time of day/visibility conditions, all of which any reasonable athletic use wouldn’t violate.

As yet, per a PIAA spokesperson, no program has petitioned to use a drone during a game. It’s not hard to envision that changing in the future. For example, the PIAA originally adopted a stance against tablets on sidelines as a video tool for coaches and players in-game. Those bans have been relaxed as the technology has progressed and become more mainstream.

With enough time and enough demonstrated efficacy, the device could find a home on — or more accurately, well above — more sidelines.

“I think it’s a great teaching tool,” Fairlie said, “and a great way to educate the kids on a lot of things.”