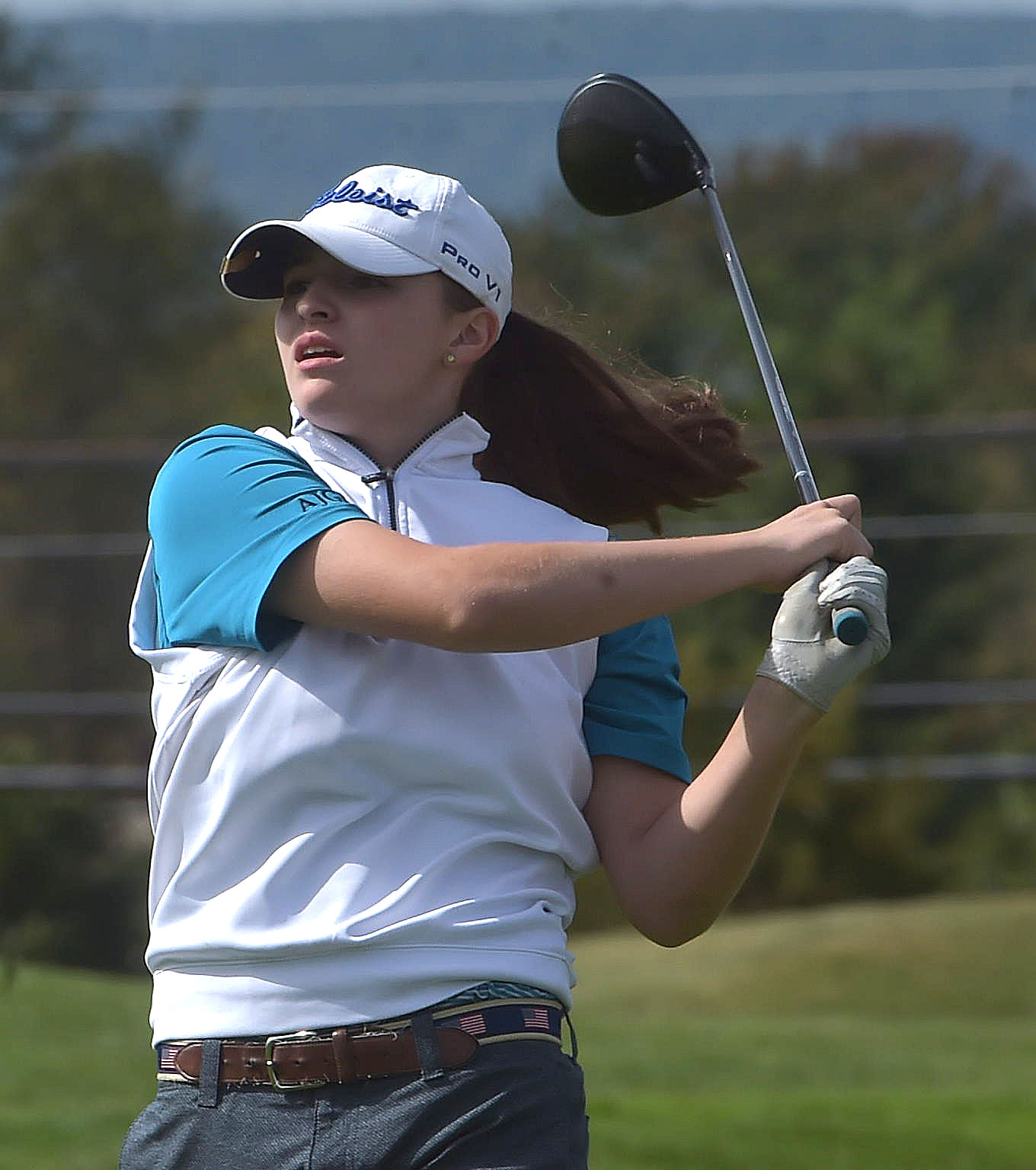 Limerick >> Lower Merion freshman Sydney Yermish pratically ran away from the field at the PIAA District 1 Golf Championship Tuesday at Turtle Creek Golf Club, winning the girls’ Class AAA individual championship by five strokes, shooting 65-71 for a two-day total of 7-under par 136.
Yermish fired a brilliant six-under par 65 at Raven’s Claw Monday, a round that inclided four birdies and an eagle; then shot a 71 Tuesday at Turtle Creek that included five birdies.

To view a photo gallery of the PIAA District 1 Golf Championships click here
“I really hit the ball straight [Monday],” said Yermish, who tied for first place earlier this fall at the Central League Girls Championship with Haverford High junior Riley Quartermain and Strath Haven sophomore Grace Smith. “Today, I couldn’t hit a drive straight, but I felt very comfortable with my irons and putter.”

Yermish, who plays on the American Junior Golf Association (AJGA) tour, is ranked No. 1 in Pennsylvania among Class of 2023 high school girls by the AJGA. Last April, she finished fifth in the Girls 12-13 division at the Drive, Chip & Putt National Finals at Augusta National Golf Club.

Lower Merion golf coach Dennis Keenan said, “Sydney has a good all-around game – she doesn’t really have a weakness. She can drive the ball 250 yards or more – at the seventh hole at Philadelphia Country Club’s Centennial Course, a 310-yard hole, she’s driven it to a greenside bunker.”

Yermish’s final round 71 included birdies at hole Nos. 1, 8, 12, 14 and 17. On each of her five birdies, she planted a wedge approach shot close to the hole. On the par-4 12th hole, she cut the dogleg on the left with her drive, then lofted a wedge to six feet; and on the par 4 No. 17, she hit a drive and pitching wedge to three feet from the hole.
Five strokes back of Yermish was Pennsbury junior Jade Gu (68-73-141).

Kim, who was even par through 15 holes Tuesday, said, “I hit the ball better today than Monday. My drives and irons were giving me trouble yesterday. … I really like this course, it’s wide-open, and there are great views everywhere.”

“Victoria had a good round today – she’s steady, and keeps herself focused,” said Lorback.

Smith’s round Tuesday included 14 pars, three bogies and one birdie.

“It was a consistent round – I was driving well today,” said Smith.
Dunigan, who contributed to Unionville’s second-place finish in the girls AAA team competition Monday, was one-under par through 15 holes Tuesday.

Wallace, who has committed to play golf for Drexel University next fall, said, “I hit the ball fairly solid all day, but in the last week I’ve been struggling with the putter. Today it was really nice to see the ball rolling and dropping. I missed a lot of birdie opportunities [Monday], so it was cool to get it back today. The course played difficult with the wind gusting today, but that’s what makes it so much fun.”

Harriton head coach Brian Dobak said, “Monday, the course was dry and fast with some wind; today was more windy and because it had rained [Monday] night, the course was softer and wet. Consequently, the golfers faced, on some level, two different golf courses, I think it kept them on their toes.”

Unionville senior Jack Cooley shot 73-77-150 to finish in sixth place, which is six spots higher than his finish at last year’s District 1 tournament. Cooley displayed some resilient play Tuesday, bouncing back after a front nine 42 in which he missed several short putts for par, and took an eight on No. 8 after hitting the water next to the green.

On the back nine Tuesday, Cooley shot one-under-par, including a birdie on No. 16, where he made a curling right-to-left 5 foot putt. On the 18th hole, he knocked in an 8-foot-putt for par that travelled on the same right-to-left path.

“David and Andrew are both grinders and mentally strong,” said Dobak. “I’m proud of my guys for making the adjustments they needed to make and battling where they needed to battle. There were a bunch of bogeys out there but they got their birdies where they needed to. It’s no surprise to me that for the second year in a row they now have an opportunity at Regionals to go to States again.”

Five golfers shot 154, and a three-hole playoff was required to determine which of those five golfers would advance to Regionals. Radnor senior Jack Hamilton and Unionville junior Roy Anderson emerged as the qualifiers.

Hamilton, who is headed to Siena College next fall, earned a par on the third playoff hole (No. 9) to qualify.

“I’m pumped for Regionals,” said Hamilton. “I was hitting my driver and chipping well today, making smart shots. I was having some trouble putting today, but the greens were rolling great.”

Anderson scored a par on the first playoff hole (No. 1) to qualify. During his second round, he birdied No. 17 then parred the tough 18th hole to get into the playoff.
In the boys’ AAA team competition, Strath Haven finished in first place with a total of 304, two strokes ahead of Pennsbury, led by senior Kevin Smith (72), his sister Grace Smith (74), junior Jackson Debusschere (78) and senior David Merz (80). This quartet scored a total of 29 strokes better than they shot on their respective Monday rounds.