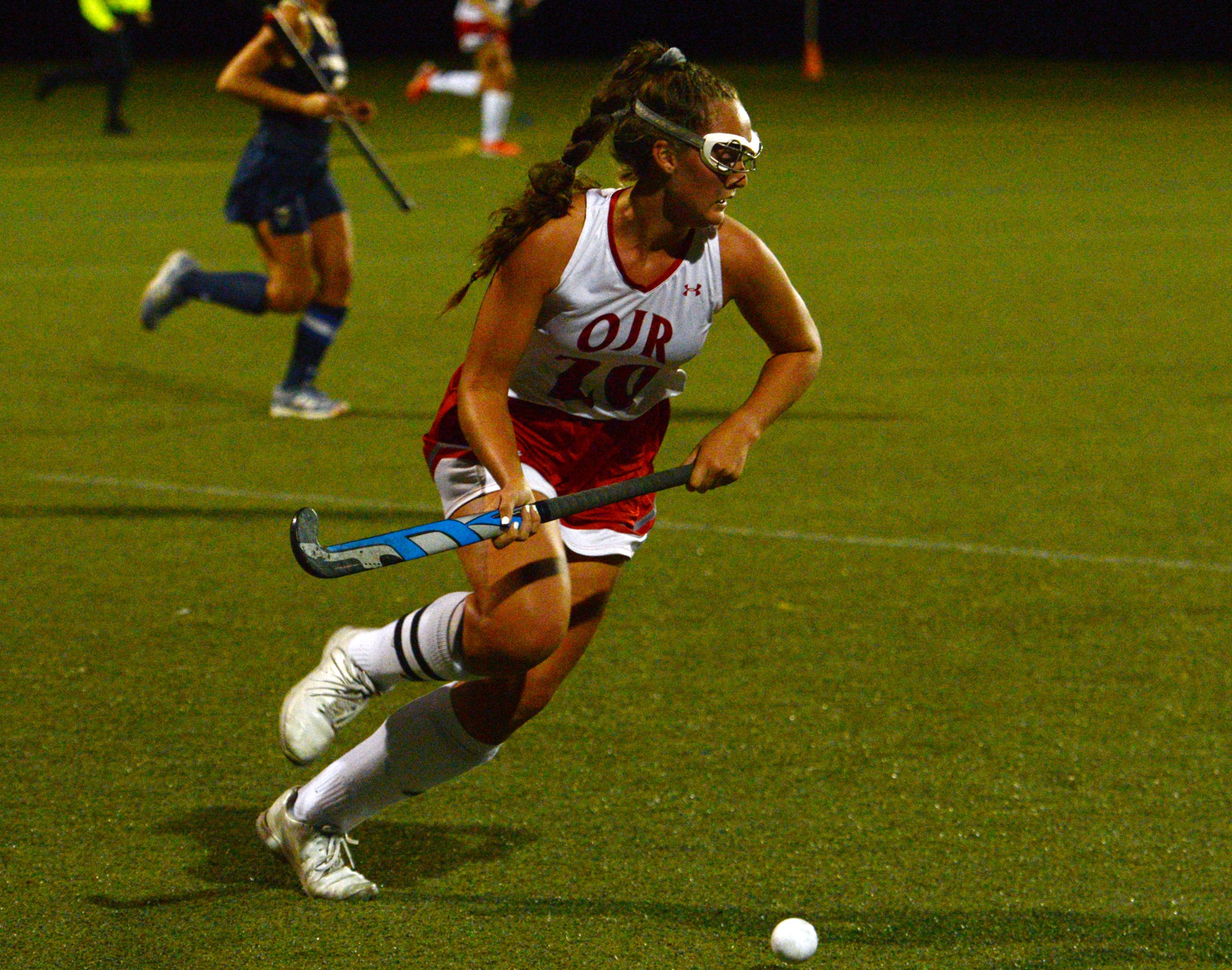 OJRs Maddi Koury possesses the ball against Spring-Ford on Tuesday.

The result was a goal within the first two minutes and a boost that led to Tuesday’s 4-1 Pioneer Athletic Conference Liberty Division win over Spring-Ford that was Owen J. Roberts’ 14th straight win.

“We were all really pumped to go in the beginning of the game,” said Lamb, who scored the opening goal. “We scored a goal in I don’t know how many minutes. It was really good. We were all in emotion together.

The Wildcats’ 1-0 lead lasted just more than eight minutes as Alexa Collins knotted the game for Spring-Ford with 20:03 to go in the first half.

A back-and-forth contest changed midway through the first half when a kick save by OJR goalie Jarvis sent play down the other end. Spring-Ford goalie Ashley Della Guardia made a kick save of her own, but Koury put in the rebound, giving OJR a 2-1 lead.

The Wildcats took a 3-1 lead, which they continued into halftime, just a few minutes later at the 12:43 mark in the first half when Koury put in another rebounded shot.

“They had a really nice rebound and shot, and then the same thing happened on the goal right after it,” Spring-Ford coach Jennie Anderson said. “We just need to do a better job cleaning up defensively, clearing the ball out as soon as it comes off the goalie. That was the turning point.”

The Wildcats controlled the ball almost the entirety of the second half, not allowing a Spring-Ford shot on goal until there were less than eight minutes to go in the game. By that time, Lamb had added another score to put the game out of reach off an assist by Kirby.

Jarvis made seven saves in the game, while Della Guardia saved eight of the 12 shots that came her way in the contest.

While recording just one assist, the Wildcats passed the ball crisply throughout the contest. The chemistry between Lamb and Koury in particular, who also played basketball and lacrosse together in middle school, has led to several goals for both of them this season.

“Julia and I always click,” Koury said. “The style of our play really meshes well. I think that really gives us an advantage on the left side.”

“We’ve always had a connection on the field, a lot of the girls on the team,” Lamb said. “This year’s seniors are really close together.”

The Rams are ranked No. 15 in the District 1-4A power rankings, currently in position to host a first-round district playoff game with Thursday’s contest with Perkiomen Valley the lone game remaining on their schedule. Entering Tuesday, Spring-Ford had won five games in a row since a Sept. 23 loss to the Vikings.

Spring-Ford (5-4 Liberty, 8-4 PAC) is still in the hunt for a PAC Final Four spot, but they will need to win Thursday and get some help around the league in order to hold off Methacton (6-3 Liberty, 8-4 PAC) and Phoenixville (6-1 Frontier, 7-3 PAC) for their first PAC playoff trip since 2016.

“We have to win Thursday,” Anderson said. “That’s what it comes down to.”

The Wildcats (8-1 Liberty, 11-1 PAC) lost their second game of the season to Perkiomen Valley in overtime. They’ve since won 14 games in a row after Tuesday night’s victory, including a 3-2 win over the Vikings on Sept. 25.

OJR has a spot in the PAC Final Four clinched and a one-game lead in the Liberty Division heading into its final regular-season league game against Methacton on Thursday. A win would lock up the division title.

“The first (PV) game kind of stunned us for a second, but we came back, and I think we’re ready to go,” Koury said.

“I think it was a really big learning moment for the team,” Koury added. “We knew what we had to do coming into it, but it was about actually accomplishing that. We came up a little short that first day, but we really pulled it together after that, and I think it taught us how to work together even more.”