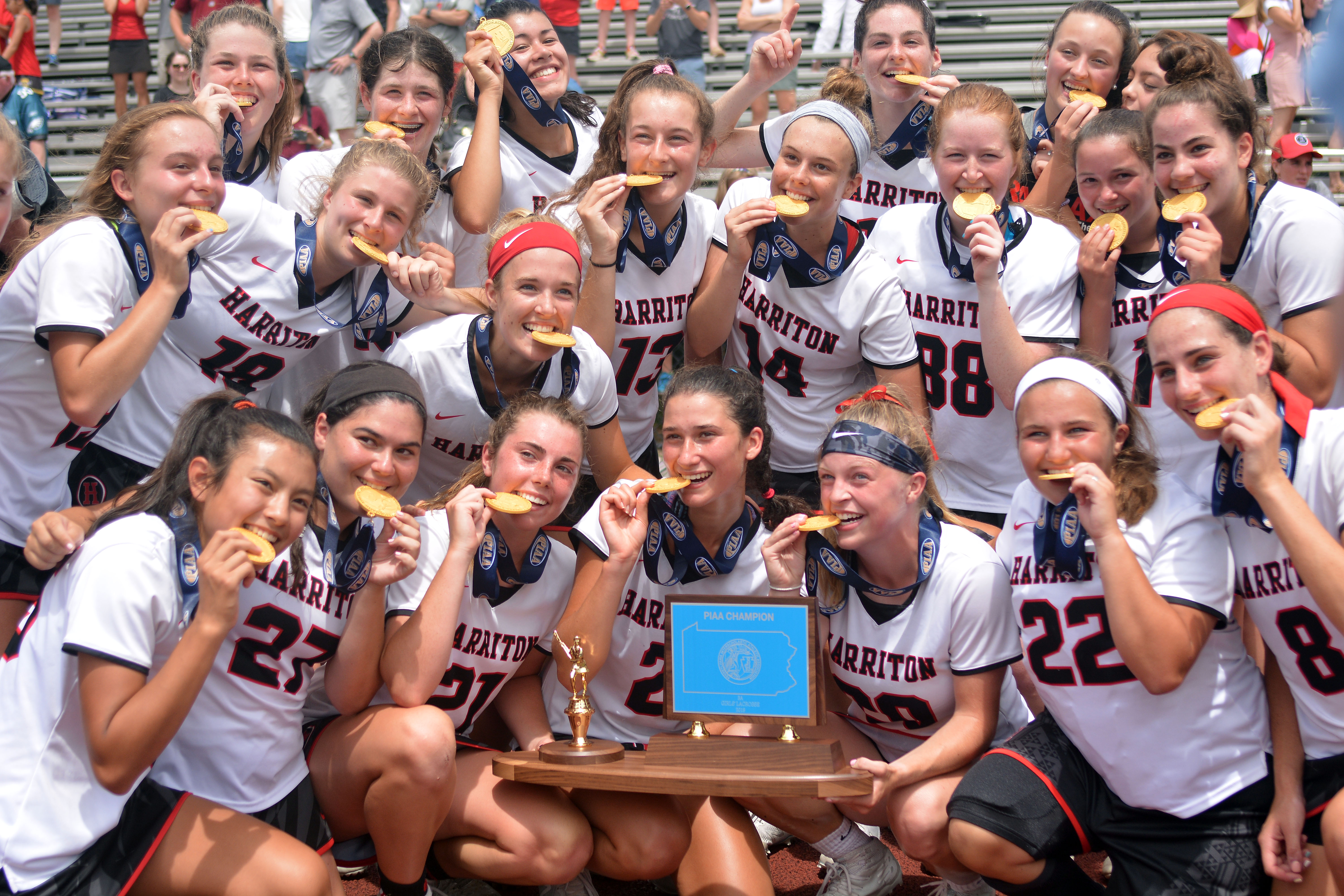 “The whole year has been dreamlike, it’s surreal,” said Dick. “I’ve been coaching a lot of these kids since third grade, with the Lower Merion Township Program, and they were the first kids I had when I started the Quaker City program. They’re a tight-knit group of girls, really nice kids, who are smart in school. All the years we played together as a club team, all that stuff is in my memory bank, and right now, it’s surreal.

“At the beginning of the year, we had no idea this [state championship] was going to happen this year. But as the year went on and the wins kept coming, we gained more and more confidence and the coaches and team started to realize what was within reach.”

This PIAA 3A state championship is the second state title for the Harriton girls’ lacrosse program; the Rams (24-2) also won it in 2013, when only one state champion was crowned.

For the first 23 minutes, Saturday’s game was a nip-and-tuck affair. Harriton trailed 4-3 midway through the first half, but Ram freshman midfielder Grace Dwyer maneuvered through heavy traffic to score and tie the game up at 4-4, then Harriton senior attack and tri-captain Katelin Williams scored (with an assist from senior attack and tri-captain Allison Schwab) to put the Rams ahead for good.

District 3 champion Manheim Township (22-4), who lost to Unionville in the state final last year by an 11-6 score, kept hanging tough through the first half. The Blue Streaks’ Taylor Kopan scored her second goal of the game to cut the Rams’ lead to 6-5 with 2:38 to go before halftime, but that was the last goal Manheim would score for the next 26 minutes.

Meanwhile, Harriton senior midfielder and tri-captain Emily Stewart worked her way through the defense to score 1:41 before the half, and Williams tallied 28 seconds later to make the halftime score 8-5.

Harriton head coach George Dick directs the Rams during their 12-6 win against Manheim in the state final. (Bill Rudick photo)

In the second half, Stewart and Dwyer, who combined for nine draw controls, gave the Rams valuable possession. Schwab scored back-to-back goals early in the second half; and midway through the second period, following some patient Harriton passing, Dwyer fired in her fourth goal of the day from close range to make it 12-5. Along with her four goals and five draw controls, she also collected six ground balls.

“Grace Dwyer is one of the best freshmen this team will ever see,” said Williams. “I’m terrified to think what she’s going to like when she’s not a freshman anymore [laughs], she’s only going to get better.

“In the first half we were a little nervous, we a little psyched out by the other team and the fact that we were at the state championship, but around halftime, we got into our groove.”

Stewart said, “We talked about winning the draw at halftime, and Grace came out and did a great job.”

Dwyer said, “I was excited to be part of it, part of this special team. At halftime, we knew we had 25 minutes left in our season, and we were going to put it all out there.”

“Alex really stepped up this year; she’s wasn’t our starting goalie last year,” said Williams. “This year, she exceeded all of our expectations and I’m so proud of her.”

“Alex kept us in the game,” said Schwab.

Turner said, “I was nervous before playing in this game; I got butterflies all last night. I was scared that I wasn’t going to play well in front of my peers. I just trusted in my reps and my consistency, and we came out victorious – and it’s the whole team, it’s not just me.

“I think [the key to our title] is that there’s not one person who carries this team, I think we have a bunch of great athletes who can come out and play and bust their butt, and that if a girls gets sick or is face-guarded and can’t get out of it, we’re still going to win.”

Short said, “We’ve been working so hard all season, and to see it come together like this is amazing. We were so close this season – everyone looked forward to coming to practice, and looked forward to being around each other. We play as a team, not as individuals.”

Dick said, “It was a real team effort. We talked before the game, and we said, ‘Do your job. Look to your right and look to your left; those people are going to do their job for you,’ and that’s what they did.

“This team is so selfless. Every one of them plays for each other. We don’t have any ‘superstars’ but we have a lot of very, very good players. We have kids who play together really, really well, and there’s a lot of them.”

When the final buzzer sounded, the three Harriton tri-captains reacted pretty much the same.

“I’m still kind of processing it, it hasn’t really sunk in yet,” said a smiling Williams. “We’ve been playing together since 2008 – been together for so long, these girls are like my sisters and I love them so much.”

“I was speechless,” said Stewart, who will play lacrosse for Iona College. “Our team is like family. We’re the Harriton girls team – Ramlax – but we call ourselves ‘famlax’ because we’re family.”

Schwab, who will play lacrosse for Washington and Lee, said, “It’s all so surreal. I’m not sure I’ve processed it yet. I guess the tears will come later. I’m going to remember these girls my whole life.”

Back to back: Shanahan runs past Hershey to win 2nd straight state title
Gormley sisters happy to share in long-awaited Springfield title