Back to back: Shanahan runs past Hershey to win 2nd straight state title 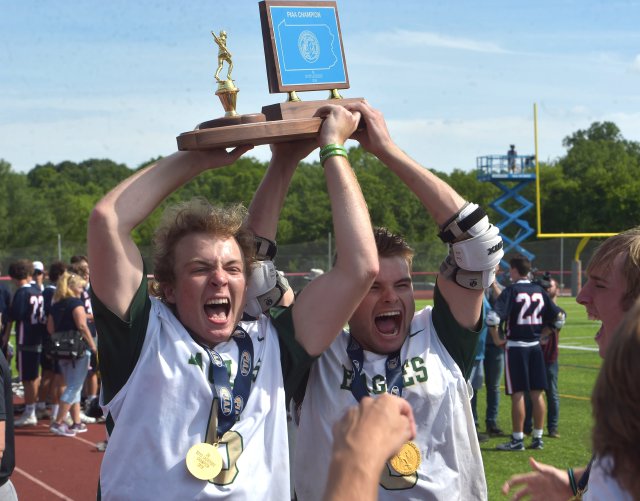 WEST GOSHEN >> Defending state champion Bishop Shanahan settled the issue quickly Saturday afternoon in the PIAA 2A boys lacrosse state final, scoring the game’s first five goals in a span of less than two minutes, and rolling to a 12-3 win against Hershey at West Chester East’s Harold I. Zimmerman Stadium.

The Eagles’ run-and-gun style was typified by senior attack and co-captain Kyle Gucwa, who scored three goals Saturday and tallied 68 goals this season.

“Our coaches told us coming into today that we’ve got to play fast; that no one can beat us in the open field,” said Gucwa. “So, we know that when we’re running and gunning, no one’s going to stop us. We do a lot of speed and weight training, so we know we can run past anybody. We had a great three days of practice leading up to the game.”

The first seven minutes of Saturday’s game was scoreless; but once senior all-state defender and co-captain Connor Whalen scored with 4:45 to go in the period, the floodgates opened. Sophomore midfielder Owen Murray scored twice in the next 42 seconds, and followed it up with another goal (assisted by All-American and all-state junior Gabe Goforth) one minute later. Just seven seconds after Murray tallied his third goal, Gucwa scored to make it 5-0 with 3:00 left in the first period.

Whalen, the co-MVP of the Ches-Mont League this spring, noted, “We started off a little slow but then we got possessions with the faceoffs – Tyler Kingsbury did an amazing job today.”

Kingsbury, a first team All-Ches-Mont League selection at faceoff, said, “I think the key was our offense moving the ball, the defense shutting them down, and us working together as a team. Coach [Heisman] gave us a great pre-game speech.”

Kingsbury, Whalen and Gucwa are just three of the standout Shanahan senior class that has complied a 76-11 record along with two consecutive District 1 2A titles along with the two state championships. This season, the Eagles (22-1) lost only one game, a narrow 11-10 defeat to West Chester East March 28, and finished the campaign on a 20-game winning streak.

Saturday’s win capped an emotional two days for the Eagle seniors, who graduated the night before.

Kingsbury, who will take his faceoff talents to High Point University, was asked what his first thought was when the final buzzer sounded ending the game and making the second straight state championship official.

In the second period, Kingsbury and company weren’t done yet, and added to their 5-1 lead the end of the first period, getting goals by Gucwa, senior attack Bryan Rafferty (who entered the game with 61 goals for the season) and senior midfielder Vincent Riccardo to stretch their halftime lead to 8-2.

“I think the key today was our intensity,” said Rafferty, who will play lacrosse for St. Bonaventure. “I think we kept up our intensity from the moment we stepped on the field. Winning two state titles in a row is a once-in-a-lifetime opportunity and we don’t take anything for granted.”

Riccardo, bound for West Chester University in the fall, added, “We beat Hershey early in the season [a 15-4 win March 30], but we knew that didn’t mean anything today – we knew they were going to come out hard and fired up.”

“Last year, winning the state title was an unbeliveable feeling, and this year, winning it again, I’m at a loss for words,” said Pezone, who will play lacrosse for Catholic University. “We graduated [much of] our defense last June, and [sophomore] Colin Gucwa, [sophomore] Jack Shimer and [junior] Sam Kirk have really stepped us for us this year.”

Pezone and his defensive cohorts kept Hershey off the scoreboard in the third quarter, while getting goals from sophomore midfielder Owen Mehok (unassisted) and Rafferty (assisted by Goforth) to make it 10-2 heading into the fourth quarter.

In the final period, Murray tallied his fourth goal of the game to give the Eagles an 11-3 lead with 9:18 left.

“We were feeling the energy early,” said Murray, who also dished out three assists, as did Goforth. “We came out strong, we knew we had to go in and dominate, and that’s what we did.”

With 5:20 to play, Kyle Gucwa, who will play for Manhattan College, finished the day’s scoring with his third goal of the game, coming from behind to net to make it 12-3.

“This state title feels a lot different because I was one of the leaders this year,” said Gucwa. “So it feels great to make the seniors from last year proud, and be able to lead a team this year. We were all great friends off the field this year. So it was easy playing for each other – it was like playing for my brother.”

Shanahan head coach Jon Heisman said, “The players on this team believe in themselves – to them, every game is the same, they bring their work pail with them, they know how to get it done. They prepare, they’re mature, they get along with each other, and they’re a wonderful, wonderful group.”

Riccardo said, “When the [final] buzzer sounded, it was a wonderful feeling – two district championship and two state championships, what a way to end the season.”