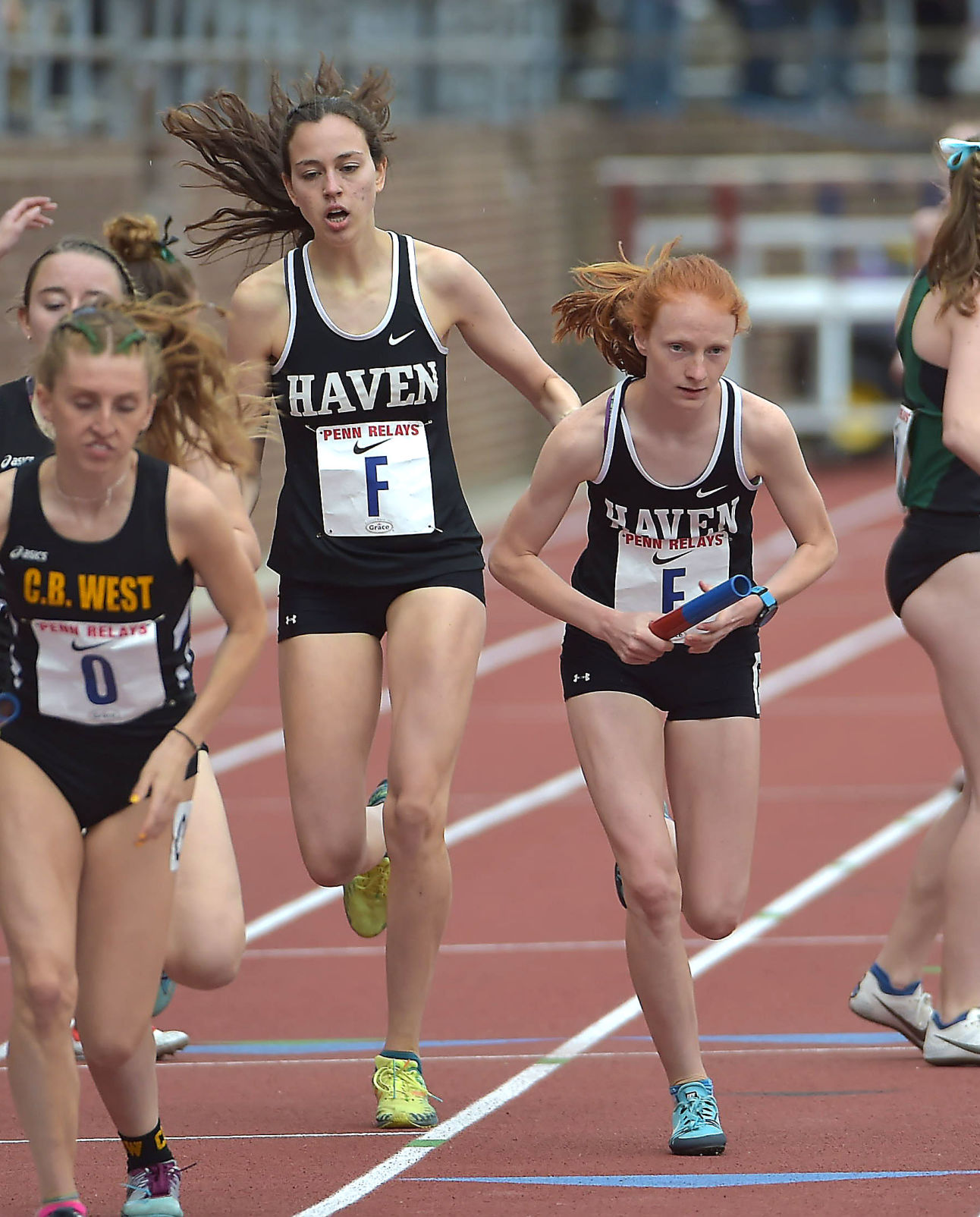 Grace Forbes of Strath Haven takes the baton from Abby Loiselle in the final leg of the High School Girls' Distance Medley Relay Championship of America at Franklin Field Thursday. The Panthers placed fifth in a time of 11:51.26, with other legs by Maggie Forbes and Olivia Malley. (Pete Bannan/Digital First Media)

PHILADELPHIA — It won’t be necessary to mention which Strath Haven athlete made a comment after learning that the Panthers had broken a Delaware County record that stood for 27 years in the High School Girls Distance Medley Championship of America race at the 125th Penn Relays at Franklin Field Thursday.

The record was put in the books in 1992 by Sun Valley’s Shannon Grady, Valerie Uff, Jean Dolan, and Kim Fisher.

When informed that Haven assistant coach Ron Porter was a ninth grader at that time, one of the Panthers said, “that record was really an old record.”

The new names in the county record book belong to Strath Haven sophomore Maggie Forbes and seniors Olivia Malley, Abby Loiselle and Grace Forbes. The Panthers’ DMR time of 11:51.26 was good enough for fifth place in the race and bettered the Sun Valley Delco record mark of 11:51.86.

“Hats off to Coach (Bill) Stull and those girls from Sun Valley, who set a record that stood for 27 years,” Strath Haven coach Bill Coren said. “We’ve run in this race twice over the years, and finished fourth and fifth. I’m so proud of what our girls did today.”

“I felt pretty good for my first two laps,” Maggie Forbes said. “Then I started feeling bad, but I knew that no matter how much my legs hurt, I couldn’t give up.”

Strath Haven was in 12th place when Forbes passed the baton to Malley, who moved her team up by one place.

“It was so tight in there on the handoff I had to slow down just a little,” said Malley, who also did the 4 x 400 and DMR double. “I knew North Rockland was a strong team, and when their girl passed me I wanted to go back past her and try to get closer to the others.

“We knew we could do this today because we’ve all been getting better.”

Loiselle made up enough ground that Grace Forbes had only seven teams ahead of her for the anchor leg.

“On my first lap, there was a group of six and we were in the next group of four,” Loiselle said. “I knew I had to at least stay where I was because of how strong that front group was. I hung on for dear life on the second lap, but I felt good about what I had done.”

Grace Forbes admitted she had done some recent training to prepare her for the difficult double she would be attempting Thursday.

“I would run hard 400s, and 20 minutes later come back and do hard 800s,” the reigning Daily Time Girls Track Athlete of the Year said. “Sometimes you have good days and sometimes you have bad days. Today was a good day. It’s my senior year, and I’ve been stressed out about a lot of things. But what we did today will give me a boost of confidence and get me ready for what we still have to do this season.”