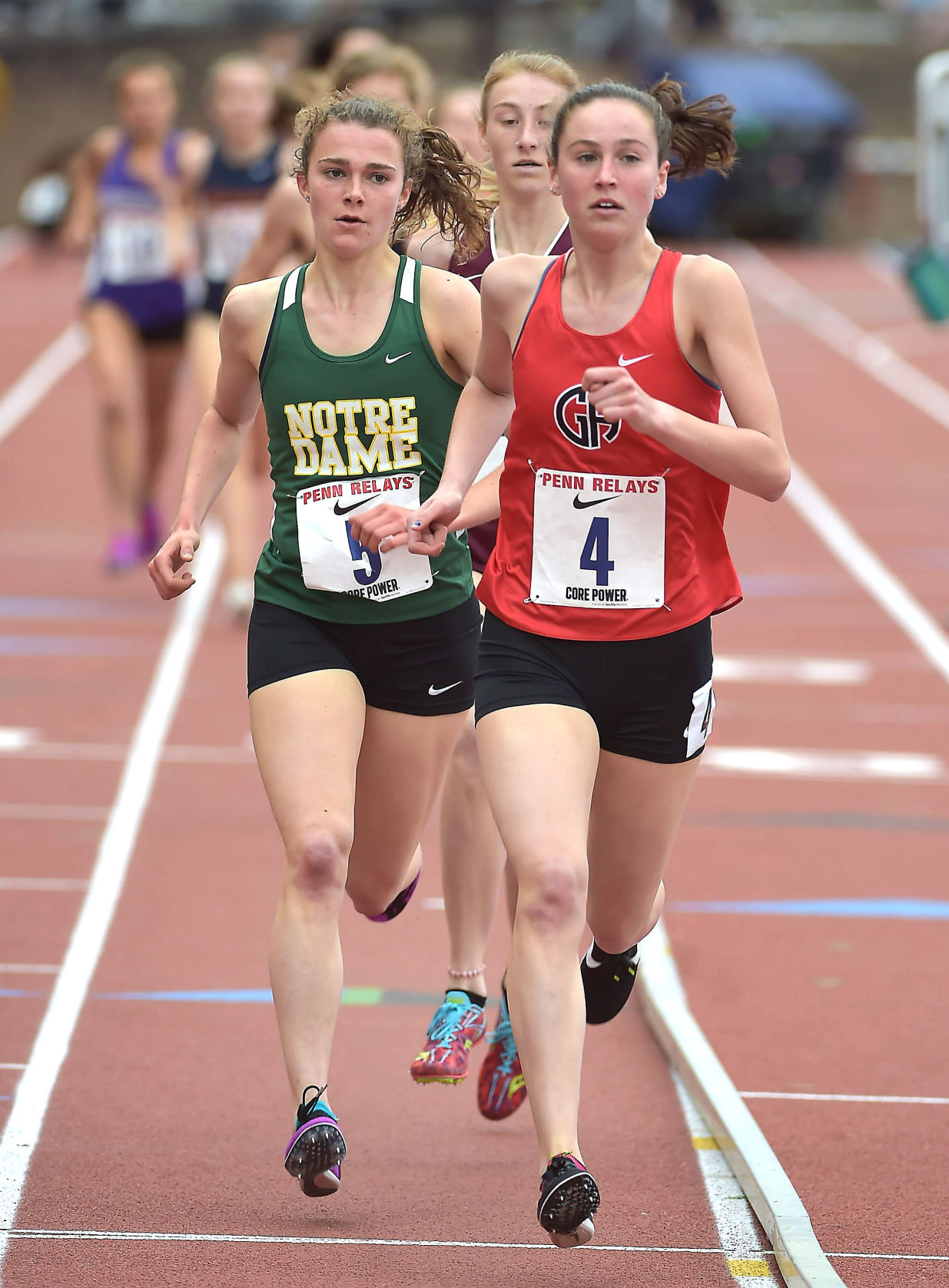 Jess Schneider of Notre Dame Academy placed sixth in a time of 4:55.17 and Germantown Academy's Isabelle Goldstein placed fourth in a time of 4:50.80 in the mile run at the Penn Relay's Thursday. (Pete Bannan/Digital First Media)

PHILADELPHIA — Elicia Moore has taken part in the Suburban A 4 x 400-meter relay in each of her four years at Penn Wood.

She is 4-for-4 after running the Patriots’ best split as they claimed a fourth consecutive Suburban A title at the 125th Penn Relays at Franklin Field Thursday.

Moore easily had her team’s best split (55.61) for the fourth straight year.

“That’s just amazing,” she said. “We had three meets last week, and that was tiring. Then (Wednesday) we went over to practice at Academy Park to work on our handoffs for the 4 x 100. I’m glad things turned out the way they did.”

“I think I could have gotten out faster,” she said. “The thing is to use your arms to get you to the finish. You use your arms and that gets your legs going.”

Davis had a little bit of ground to make up on her anchor leg.

“I wanted to stay behind (the Chester runner) at first,” she said. “That way I would have enough left to finish the race. When my legs started to tighten, I just pumped my arms and kept on going.”

“What they did was super,” Strath Haven coach Bill Coren said. “They’re all seniors, and they all ran under 60 (seconds).”

“I remember how it was so bumpy at the start and I got boxed in,” she said. “I knew I had to go out stronger today.”

Hubbell isn’t happy when there is a competitor close to her on the track.

“That gets me so stressed out,” she said. “You’re obviously more comfortable when you’re out ahead.

“I haven’t run the 400 that much this year. The thing that keeps me together trying to get to the end (of a race) is using my arms and really working at it.”

Penn Wood’s team of Lee, Moore, Davis, and Kayla McFadden turned in the top local time in the 4 x 100-meter relay at 48.80. Upper Darby (Cisco, Timmons, Lina Salami, Michelle Ley) came in with a 49.20-second clocking. The Patriots and Royals failed to qualify for the Tri-State championship race.

“We had to change our order around today,” Penn Wood’s Moore said. “The handoffs were clean today, and that’s what we were happy about.”

Jessica Schneider of Academy of Notre Dame came in sixth in the mile run in 4:55.17. As she was preparing for her race, her sister, Mikayla, ran the 800 leg in 2:08.58 in helping the University of Notre Dame take second place behind Penn in the College Women’s Distance Medley Championship of America.

“It was definitely fun to be able to see her run,” Schneider, who also will attend Notre Dame, said. “I ran about what I thought I could run today. I just got passed near the end for fifth place.”

In Thursday’s field events, Garnet Valley’s Riley Beebe took 13th in the javelin with a best throw of 121 feet, 5 inches. Upper Darby’s Kayla Thorpe was 14th in the shot put at 39 feet, 11¾ inches.

In the triple jump, the Royals’ Siani Barnes was 14th (37 feet, 1 inch), and Meghan Lynch of Ridley took 18th place (36-7) before hustling on to the track to help the Green Raiders to sixth place in the Central League 4 x 400.