Carroll defends the three, moves to second round of states 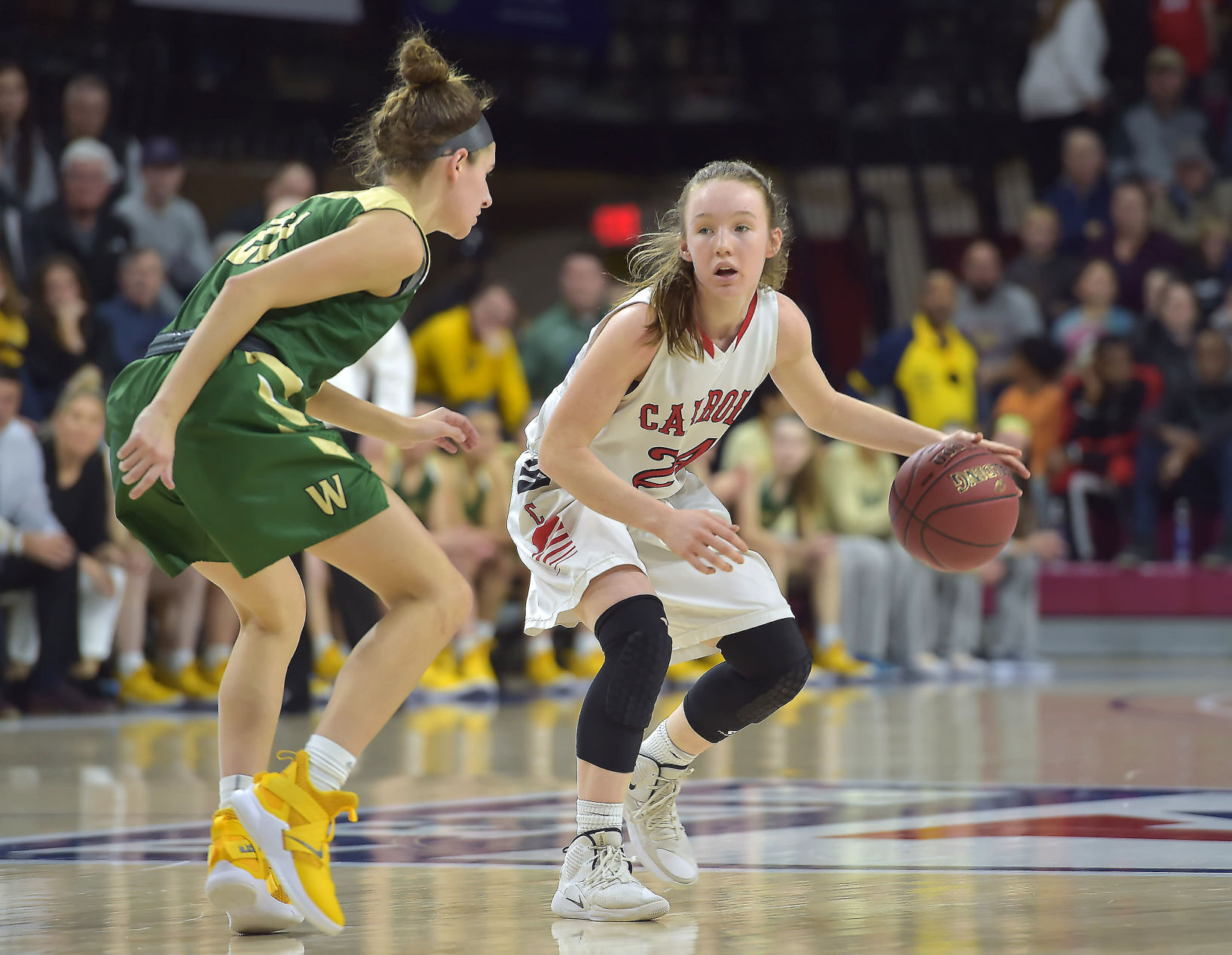 PHILADELPHIA — Before Archbishop Carroll took on Spring Grove in a PIAA Class 5A girls basketball opening-round game at Thomas Jefferson University Saturday, Patriots coach Renie Shields said there were things about the Rockets that had her concerned.

“They’re going to want to shoot (3-pointers),” Shields said. “We know we have to be ready for that and play good defense or this could be a team that gives us trouble.”

The District 12 champion Patriots heard what was being preached to them and turned in a solid effort at both ends of the floor in earning a 56-34 decision over the Rockets, the seventh-place team from District 3.

Carroll will play a state tournament second-round game Wednesday against District 3 runner-up Gettysburg (23-6), which advanced with a 43-39 victory over West Chester Henderson Saturday.

Junior Erin Sweeney (6-for-10 shooting, including 4-for-6 on 3-point attempts) and freshman Grace O’Neill (8-for-11 from the floor, including 3-of-6 from behind the arc) shared scoring honors for Carroll with 20 points apiece as the Patriots shot 20-for-45 (44.4 percent), with 8-for-17 (47 percent) accuracy from long range. Sweeney also chipped in with seven rebounds, four steals, and one assist.

What impressed Shields as much as Carroll’s offensive effort was the defensive work that limited Spring Grove to 13-for-39 (33.3 percent) shooting accuracy, which included 6-for-21 (28.6 percent) on 3-point tries. Harlem Jennings, who had one field goal in the first half and one in the second, was particularly effective as a Patriots defender. She also managed to find four open teammates and get them the ball for baskets.

“Harlem anchors everything we do defensively,” Shields said. “She covers so much area, and the others do a great job shifting over and filling in. We did well in the second half shutting down their guards, although I guess you can say most of the people they put out there were guards.”

Spring Grove shot 3-for-9 long range before halftime, but that number dropped 3-for-12 in the last two periods.

“The defense did an excellent job,” Shields said.

“You know what they say about how if you are you up by five points after one period you want to try to be up by 10 after two,” O’Neill said. “We just tried to make sure we kept moving the ball and working well together.”

O’Neill has seen her share of Carroll playoff games over the years. Her uncle, Chuck Creighton, was the head coach of a pair of state championship Carroll teams, and her cousin, Meghan Creighton, was an all-state guard with one of those teams. O’Neill was playing in a state tournament contest for the first time Saturday.

“Really all you can think about is that this is your next game,” she said. “We saw a film of (Spring Grove), which helped us get our defense set. And we worked drills to keep us sharp running our plays.”

Sweeney hit two 3-point shots in the first period and two more during Carroll’s 18-8 run in the third period.

“Grace is so impressive with all the things she can do and it’s great having her out there with us,” Sweeney said of O’Neill. “Today everyone knew how important it was that we talk on defense whether (Spring Grove was) shooting outside or trying to drive.

“This is a good win, and now we have (Sunday) off. Then we have to get ready for our next game. It’s a little different than playing in the Catholic League against teams you know so well.”