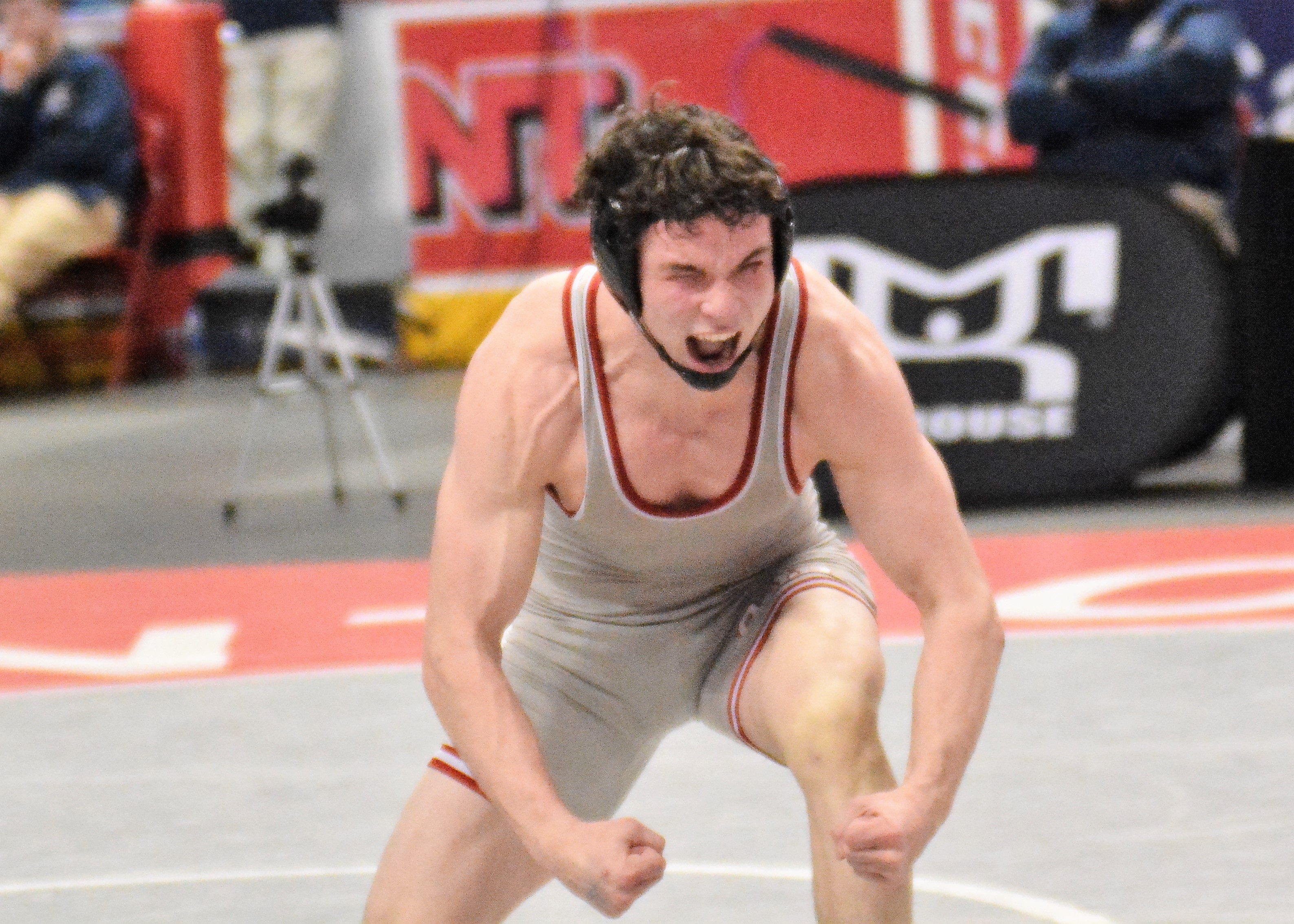 HERSHEY >> It was a dream exactly one year in the making.

And a reality that will last for all time.

Daniel Mancini remembered being at Hershey for the 2018 PIAA Championships. He remembers being on the fourth step of the medal podium — a big step up, considering his DNP showing the previous year — and how it didn’t satisfy his ultimate goal.

“Last year, it felt close,” he said. “I was two points short of a state champion, which is what I wanted.

“That was my mindset in training this year.”

The goal was achieved Saturday. Mancini became the champion of the Class AAA bracket’s 152-pound weight class with a 10-2 victory over Kiski Area’s Cam Connor in the title bout. The Owen J. Roberts senior, dissatisfied with a third-place showing in last weekend’s South East AAA Regional tournament, came to the Giant Center determined to keep the dream alive. He did so by outscoring his three early-round opponents … key among them a 2-1 UTB verdict over Bethlehem Catholic’s Cole Handlovic in Saturday’s semifinal.

“I couldn’t think of a better way to end my career,” he said.

Mancini (36-3) took a 2-0 lead on Connor in the first period. He upped it to 5-1 in the second, scoring an escape and takedown off a bottom start while Connor got an escape later in the period.

In the third, Mancini regained his composure after being cautioned twice on his top start. He answered another Connor escape with a takedown, then got three back points to sew up the victory.

“I knew I could beat him in hand-fighting,” Mancini said. “I was patient, timed my shots well, and it worked well.” DeRafelo, for his part, was happy to see Mancini achieve champion status … for more than just the athletic accomplishment.

“The great thing is not just getting one (champion),” he said, “but the quality of kid Dan is. He’s created a blueprint for kids in the community, doing the right things day in and out.”

Antonio Petrucelli pinned his way to a fifth-place medal at 138, cradling Northampton’s Devon Britton in the third period.

Petrucelli (44-10) shot a cradle on Britton following a first-period takedown. Taking a 5-1 lead into the second, he scored another takedown after Britton escaped from a bottom start, then got a takedown to start the third.

Petrucelli opened the third with a takedown off a standing start, then slapped another cradle on Britton and got the slap in 3:54. It got the OJR junior his first medal finish in two Hershey visits for the individual tournament. Joey Milano had his stellar wrestling season come to an abrupt end in the 182-pound third place bout. The Spring-Ford sophomore, making his first extended post-season run, came away fourth at states with a loss to Belle Vernon’s Scott Joll.

Milano (45-4) was dropped into wrestlebacks with loss to Erie Cathedral Prep’s Carter Starocci, a nationally-ranked Penn State commit. He rebounded in the consolation semifinals with 10-1 major decision of Peters Township’s Brandon Matthews.

The Boyertown sophomore sustained a muscle spasm from his quarterfinal bout Friday with Seneca Valley’s Dylan Chappell, He was able to pull out a 1-0 victory over Downingtown East’s Keanu Manuel in the next round before being deemed unable to go on.

Maldonado, making his first appearance at states, closed out season with 37-16 record. He topped his weight class at the District 1-AAA North tournament and was third at the South East AAA Regional.

“The season went great. The team was awesome,” Maldonado said. “This was a pretty amazing experience. I couldn’t have asked for anything else.

That was my goal all season, to make it here and place.”