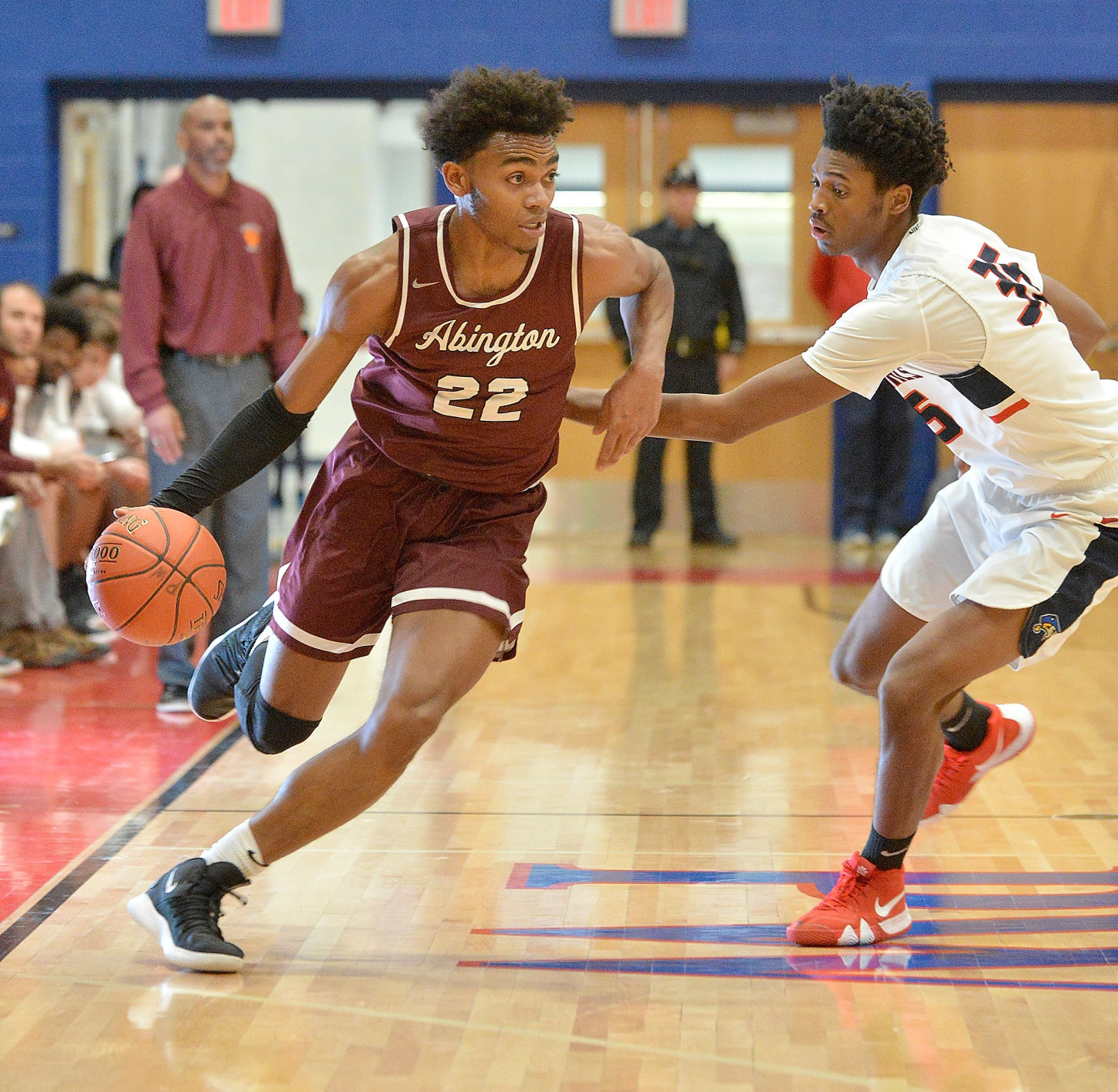 Lucas Monroe would like to find to get the switch stuck in the “on” position permanently.

It’s not the type of thing the Abington boys basketball team wants to keep doing, especially now that it’s the postseason, but when the Ghosts do decide to flip the switch, they’re pretty good. After an even first half with No. 17 Downingtown West, the No. 1 Ghosts flipped the switch in the third quarter of their second round District I 6A playoff game Tuesday night.

Thanks to a one-sided third quarter, the two-time defending district champions pulled away for a 72-47 win, advancing to the quarterfinals and locking up a state playoff bid.

“I can’t stand that switch, I really don’t like it,” Grasty said. “It drives us crazy. We’re not asking for perfection, but we want four quarters of effort.”

Abington clung to a 31-30 lead at the half with Downingtown West having played 16 really good minutes of basketball. Monroe and Eric Dixon felt like their team was sluggish in the first half and it showed, especially on the defensive end.

The Ghosts hadn’t played since last Monday and Dixon felt it was evident in their defensive rotations, accepting blame for being late several times in the first half. Downingtown West took advantage, whether it was Will Howard and Cam McCole attacking the rim or Sean Kaiser hitting open jumpers.

“It was discipline and sticking to the game plan,” Whippets coach Stuart Ross said. “We have a saying that ‘Discipline controls our destiny’ and we stuck with what we were trying to get done. I’m proud of the way they played.”

The highlight of the first half came from Dixon. After a drive, the 6-foot-7 Villanova recruit had the ball knocked away from him. He dove on the floor, recovered it and while sitting in the lane with his back to the rim, threw up an overhead hook shot and leaned back to watch.

“It’s been a while, I don’t think I’ve done it since middle school but that was my third time doing that in a game,” Dixon, who led all scorers with 28 points, said.

Abington knew it needed to do something different in the second half. Grasty felt like it was mostly an effort thing while Monroe pointed to the zone defense the Ghosts came out in, specifically the energetic play of Manir Waller at the top of it.

Downingtown West got a bucket from McCole with 6:50 left in the third, cutting the Ghost lead to 33-32. The quarter ended with Abington ahead 50-32 after the hosts held the Whippets scoreless the rest of the way and took the frame 19-2.

Monroe, who ended the game with 19 points and eight rebounds, was Abington’s other catalyst alongside Waller. The Penn-bound senior wing scored nine points in the quarter as Abington got the Whippets out of rhythm.

“They changed the defense up a little bit and it took a little bit of time for our guys to adjust to it,” Ross said. “Having the length and the athleticism they do, it causes you to have some issues. We still battled all the way to the end.”

McCole paced Downingtown West with 18 points while Howard added 13. Ross noted the challenges of defending Abington and said he tried to commit two players to Dixon on the glass, but it helped open things up for Monroe to capitalize.

Waller capped off his strong third quarter with a buzzer-beating three, putting the Ghosts firmly in control.

“It was impressive,” Grasty said of the third quarter effort. “That third quarter, we came out with the energy we needed to. We played well, we got stops, they missed a few shots and we were able to get out in transition and get a few easy ones.”

While Monroe and Dixon combined for 28 of the 31 first half points, the Ghosts played good team basketball all night. Abington finished with 21 assists on 29 made baskets, with senior guard Maurice Henry leading that effort with six helpers.

“Credit our coaches for preparing us all week,” Dixon said. “They keep us competing in practice and preparing us for what we need to do. We try to come out ready for the intensity and try to match it but we knew it was going to be hard, especially because they had just played Friday.”

Downingtown West will travel to No. 9 Cheltenham in the playback bracket as both teams try to extend their season.

Abington will host No. 8 Perkiomen Valley after the Vikings topped Cheltenham 43-36 on Tuesday. PV is the type of team that could make Abington pay for waiting too long to flip the switch, which is why Monroe was looking for a way to keep it turned on all the time.

“We might be a third-fourth quarter team, we tend to have some slow starts then pick it up,” Monroe said. “We have to figure it out because we’re going to run into a team that’s not going to let us pick it up like that. We’ve played against a lot of different teams, a lot of different defenses and teams come out excited to play us and make shots.

“Our guys don’t get fazed, we stay in it, keep running our offense, keep playing hard and eventually we pick it up.”