Range Finders: Pope John Paul II lights it up from outside, tops Pottsgrove 75-66 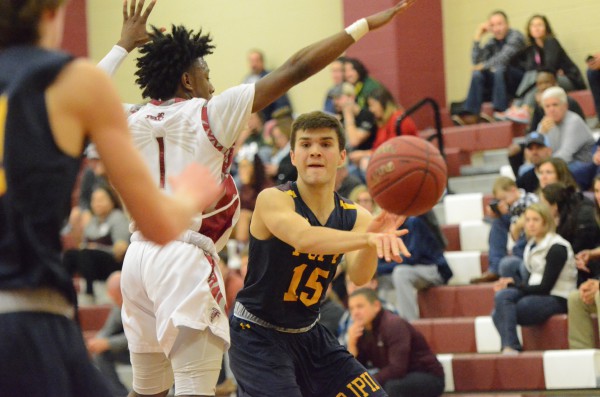 Rather than pull up for it, though, the Pope John Paul II junior put the ball on his hip, then kicked it out to Chris White who knocked down a wide-open 3-pointer.

“In hindsight I guess I could have probably shot that,” McKeon said with a laugh.

It was just one of those nights for the Golden Panthers, who knocked down 11 3-pointers on the way to a 75-66 win over Pottsgrove in a Pioneer Athletic Conference Frontier Division matchup.

With a roster of virtually all new faces at the varsity level, first-year head coach Brendan Stanton loves what he’s been seeing so far this winter. So much so, that Stanton channeled his inner-Jason Kelce after the game.

“I know it’s a little bit corny, but we’re telling our guys ‘Hungry dogs run faster,’” he said. “These kids are all hungry to play varsity minutes — they thought they should have been playing varsity minutes last season. These kids just want it, and they’re really proving it so far.”

The loss stands as the first of the year for Pottsgrove (1-1 PAC Frontier; 4-1 overall) fresh off Thursday’s non-league win over Unionville.

Four players scored in double figures for the Golden Panthers (2-0 PAC Liberty; 3-1 overall) in the win. McKeon and senior forward Sean Bustynowicz each knocked down three 3-pointers and scored a team-high 16 points while White (two 3-pointers) scored 15 and sophomore forward Justin Green battled in the paint for 14. Senior guard Tyshere Malachi finished with nine points, including a 3-pointer.

That scoreline was music to Stanton’s ears.

“If we can have five guys score, it’s really hard for anyone to narrow in on one or two guys,” he said. “The way we move the ball, everyone is gonna get open shots. Everyone’s got to continue to trust that if they make the extra pass, they’re gonna get that extra pass the next time around.”

The Golden Panthers played even with Pottsgrove for the most part throughout the first half, heading to the locker room with the score locked at 33-33. PJP opened up the second half on an 8-2 run just over a minute into the third quarter to take a lead they wouldn’t relinquish.

McKeon scored nine points during the third while Green added eight, including PJP’s final six points in the frame as the Golden Panthers took a 54-46 lead into the final quarter.

“The energy on our team has been incredible,” said Bustynowicz. “Whether it’s the guys on the bench or on the floor, everyone is cheering, everyone’s bought in. We’re only going up from here.”

“We’re all playing with a chip on our shoulder,” added McKeon. “We’ve all got something to play for and we’re bringing our best every game.”

Pottsgrove head coach Jack Flanagan, a teacher at Pope John Paul II, put a lot of the blame on his own shoulders following the loss.

“It falls on the coach to come up with something during the game, even when they’re shooting it that well,” he said. “I didn’t get it done. I could have done a better job.

“I know people are gonna say that they shot it really well, and they did. But as a coach, I’ve got to come up with some kind of a defense that’s gonna stop them.”

Pottsgrove senior forward Khaliym Smith battled for a game-high 24 points in the paint while senior guard Justin Robinson added 20. Talented senior point guard Manny Clark was held scoreless through the first three quarters before he knocked down a pair of 3-pointers in the fourth quarter.

“We’ve got a lot of different guys who can contribute,” said Flanagan. “It’s just a matter of putting them into the right spots so that they can make plays.”

Up Next >> Pope John Paul II will travel to face Devon Prep on Saturday while Pottsgrove will have some time to reset before next Tuesday’s game against Upper Perkiomen.