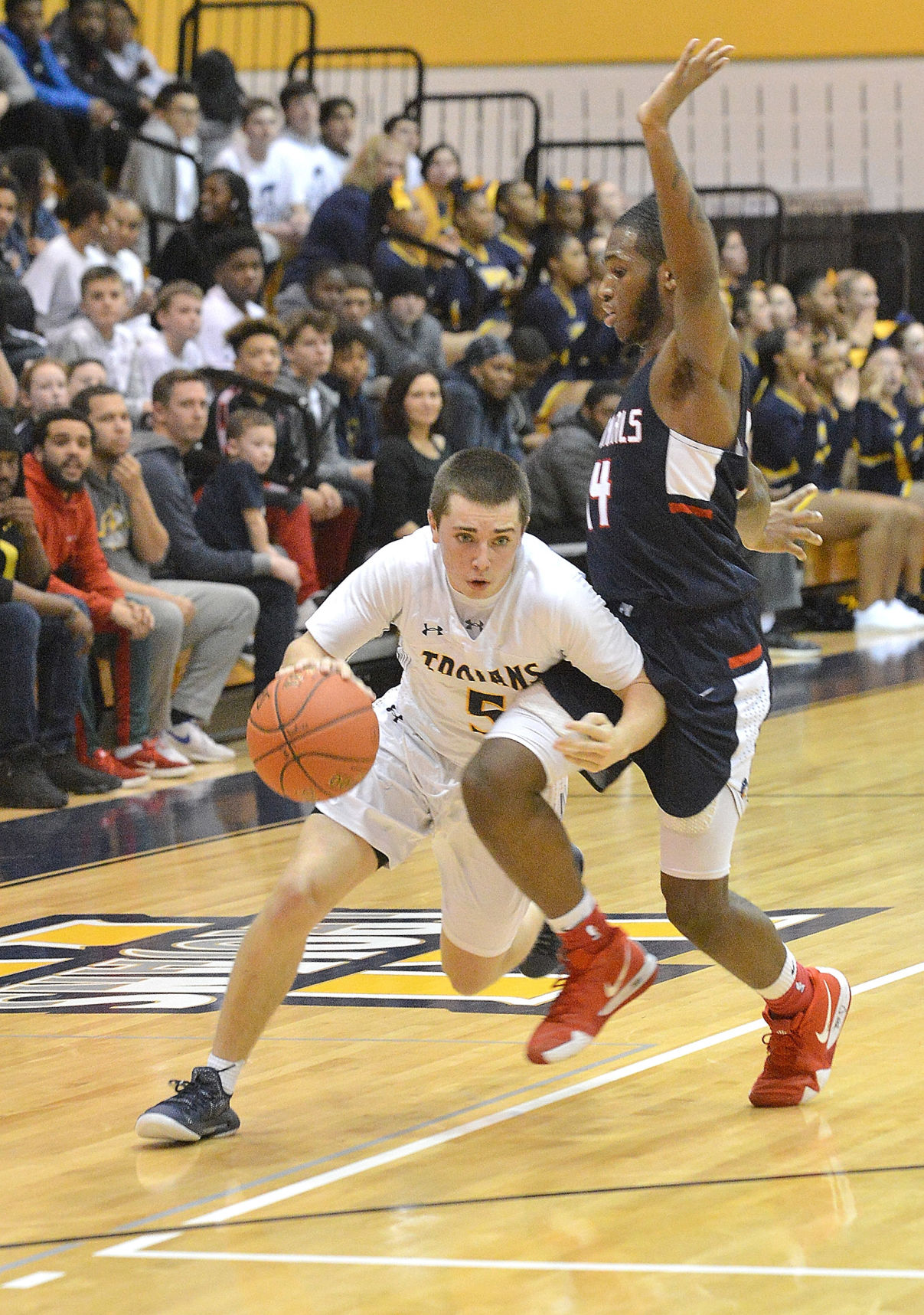 After losing the lead to Wissahickon for the first time late in the third quarter, head coach Jim Donofrio took 7-foot-3 center Naheem McLeod off the floor.

His guards rewarded him.

Caelin Peters scored five points to close out the third quarter and send the Colonials to the fourth trailing by just one.
That’s when Kyree Pendleton took over.

Pendleton hit a three on the first possession of the fourth quarter and scored PW’s first 14 points of the frame to help build a 10-point lead.

Plymouth Whitemarsh’s Caelin Peters pulls up to shoot near a hosts of Wissahickon defenders during their game on Friday, Dec. 14, 2018. (Gene Walsh/Digital First Media)

From there, PW cruised to a 63-47 win over Wissahickon in the Suburban One League American Conference opener for both teams at Wissahickon High School.

“Fourth quarter I felt like it hit my mind,” Pendleton, who scored 17 in the fourth, said. “I looked at the score. I went to the athletic trainer’s room and I came out and saw what was going on. It hit my mind that I need to get in and do what I have to do.”

“He’s an emotional guy so he goes on emotional runs and it was nice to see that it showed up at that time,” PW coach Jim Donofrio said.

Eddie Fortescue hit a three with 2:50 left in the third to give Wiss its first lead of the game. After a McLeod layup to put PW back on top, Harrison Williams gave the Trojans a two-point edge with his fourth three of the night.

That’s when McLeod came off the floor.

Wissahickon’s Eddie Fortescue goes in for a layup near Plymouth Whitemarsh’s Naheem McLeod during their game on Friday, Dec. 14, 2018. (Gene Walsh/Digital First Media)

“You’re pretty much thinking Nah will be in every second of every game,” Donofrio said, “but even Nah knows if it ain’t clicking for him, we’re not going to sit here down by two and down by four and let a team just dictate whatever they want to do for the next 14 minutes. We have to go to the next gear.”

McLeod dominated the first quarter, scoring 14 points and grabbing four rebounds. He finished the game with 19 and eight.

“We just tried to pinch and hustle and scrape and claw,” Wissahickon coach Kyle Wilson said of stopping McLeod after the first quarter. “I don’t know if there is any set formula. You have to be a little fortunate. One — I think we were really doing a nice job with defending the post and not letting easy entry and not getting easy catches near the rim. Then I think some of it is they weren’t playing their best at that point and we got them into a little funk.”

PW led by four points at the end of the first quarter and at halftime.

Fortescue scored eight in the third to lead Wissahickon to a one-point lead with eight minutes remaining. Maurice Willis and Carmen Ostroski each added four points in the third.

“I think our guys got a little fatigued,” Wilson said. “Maybe adrenaline — the high came down — but I thought (PW) applied good pressure and we just didn’t handle that pressure at the end. That made the difference down the stretch.”

“We’re a good, fast team,” Pendleton said. “Even with Naheem in we’re able to do what we need to do on the defensive end. With him out, I feel like we were a little bit faster and we were able to put pressure on the ball when we needed to.”