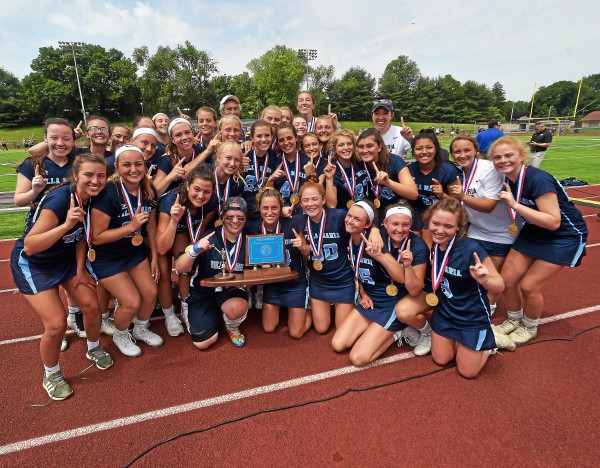 West Goshen >> Villa Maria won its first-ever PIAA state championship in overwhelming fashion Saturday, defeating Kennard Dale, 17-5, in the 2A state final at West Chester East’s Harold Zimmerman Stadium.
The powerful Hurricanes (23-2) scored in the first 10 seconds of the game, bolted to a 5-1 lead seven minutes into the contest, and held a 10-2 advantage at halftime.

To view a photo gallery of the Villa Maria – Kennard Dale state final click here
Villa Maria junior midfielder Abby Walheim set the tone on the opening play, winning the draw and feeding sophomore attack Hannah Young for a quick score. Walheim has averaged six draw controls per game this season, and collected seven in the first half Saturday.
“When Hannah scored, it definitely built a lot of momentum, and the energy spread to everyone on our team,” said Walheim. “I definitely felt more confident, and then we built our lead.
“By the time the final buzzer sounded, and we’d won [the title], it felt even better than I thought it would.”

“The whole game just felt like a dream,” said Villa Maria senior goalie Maddie Medve, who recorded seven saves.
Villa Maria head coach Erin Sweeney said, “Our team was ready for this game, they came out ready to go.”
Villa Maria built an early 5-1 lead on two goals by senior Erin Finley, and single scores from Young, sophomore midfielder Bridget Finley and junior attack Sarah Delaney.
Even the Villa defense was scoring. After an excellent save by Medve, Villa Maria junior defender Kristy Kucia made a coast-to-coast run and scored to give the Hurricanes a 7-2 lead 9:31 before halftime.
“It was great that our defense was getting the ball and taking it all the way down to the goal today,” said Walheim. “It’s good to know that everyone on our team relies on each other, and that everyone is contributing.”
By halftime, both Young and Erin Finley had hat tricks and the Hurricanes held a 10-2 lead.
In the second half, Villa Maria kept the pressure on Kennard Dale (21-5), which was making its second consecutive trip to the PIAA 2A state finals (last year, K-D lost to Radnor, 20-8, in the state finals).
“At halftime, we didn’t feel like we could let up, we knew that Kennard Dale isn’t the type of team that lets up,” said Walheim. “In the second half, we felt like we had to go that much harder.”
When Finley scored her fourth goal of the game (and 100th career goal) it gave the Hurricanes a 14-4 lead with a little over 12 minutes to play.
Finley, who is headed to the Naval Academy, said, “The feeling of winning today, there’s no words to describe it. We’ve worked so hard these past four years, and especially with Allie being a new coach [in her second year], we’ve had three different head coaches in the past four years, to win this is just so special.”
The state title was particularly sweet for Sweeney, a 2008 Villa Maria grad.
“Winning this as a [Villa grad] was really cool,” said Sweeney. “All our friends from Villa Maria, the players’ friends, were singing the alumni song, they felt like a part of [the state title]. This game brought our alumni back.”
Speaking of getting everyone involved, the Hurricanes had eight different goal scorers Saturday, which fit in with the usual Villa Maria scoring pattern of spreading the wealth. Nine of Villa Maria’s goals were assisted, with Abby Walheim (three), junior attack Paige DeMutis (two), Young (two), Bridget Finley and sophomore defender Maggie Powers getting the assists.
“Today, we did everything we’ve done all season,” said Sweeney. “We really played well off the draw – Abby really went off in the first half. We were patient on attack, we had great ball movement, our defense really played well together, and Maddie came up with big saves when we needed her to.”
While many Villa Maria underclassmen played a key role Saturday (Young and Delany both had hat tricks, and Erin Finley was the only VMA senior to score), the state title win was particularly meaningful for the Hurricanes’ seniors.
Medve said, “When I looked back at the clock and there was 2:30 to play, I thought, ‘Oh my gosh, this is real, this is really happening.’ I turned to one of my defenders, I think it was Shannon [senior Shannon Smith] and said, ‘Dude, this is happening, this is real, we achieved our goal.’”
Erin Finley said, “You kind of try not to look at the scoreboard during the game, but with two minutes left, I looked at it and realized we were about to win, and it was an amazing feeling.”
“We always dreamed of this moment, and today we made it reality,” said Medve, who finished her senior season with 191 saves. “I just wanted to end [my Villa Maria career] on a strong note. I’m really proud of how we played today, all-around. I couldn’t think of a better way to end my high school career.”