Bishop Shanahan gets defensive to rally past Strath Haven 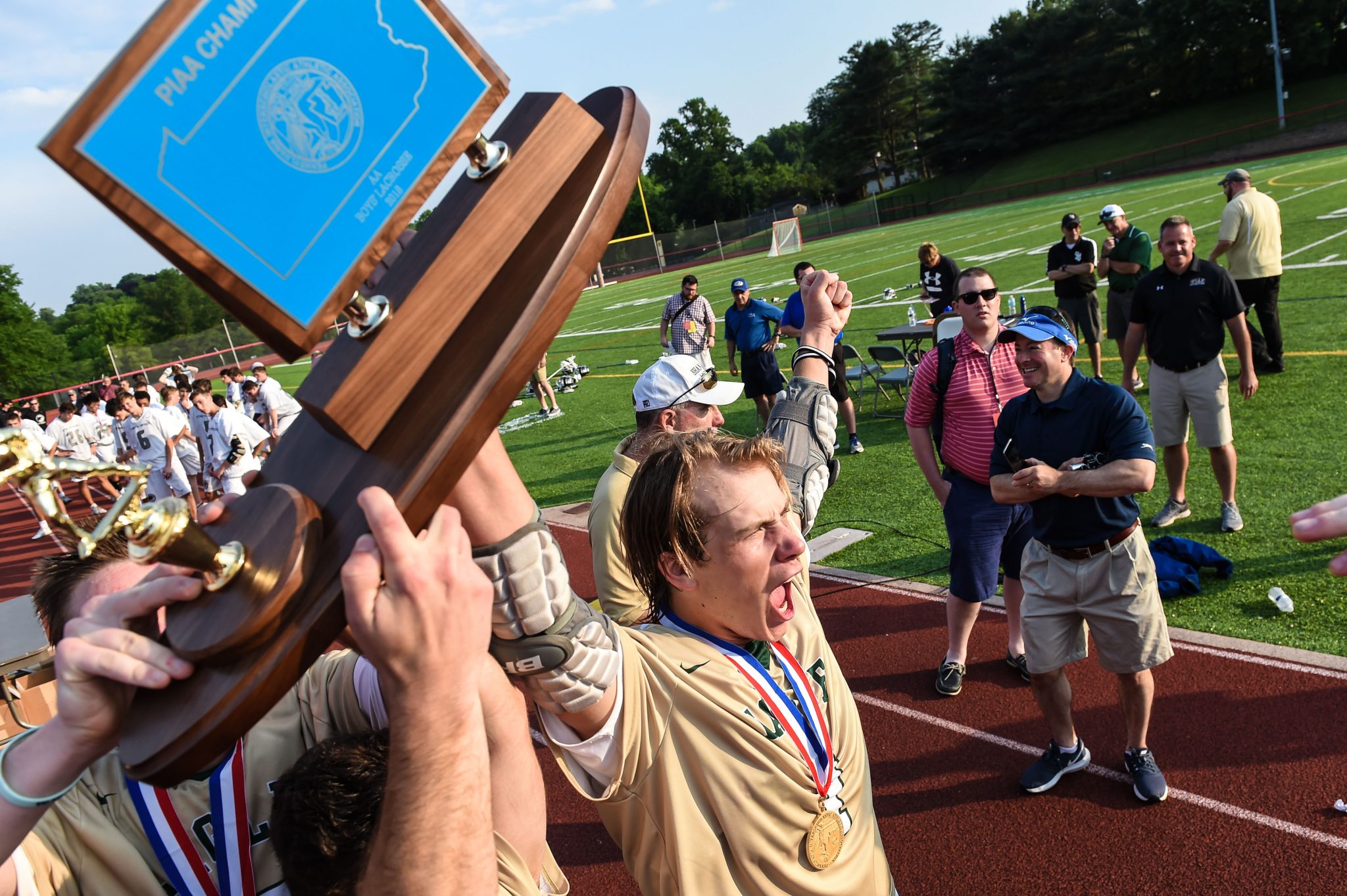 WEST GOSHEN >> Thomas Ford knew that the Bishop Shanahan team that showed up for the first 12 minutes of the PIAA Class 2A final Saturday afternoon wasn’t the one he’d seen all year.

“We just weren’t playing our game,” the senior defenseman said. “We knew that once we really started playing our game, we could get back to where we started from in the beginning of the season.”

A little defensive adjustment, a goal to break the inertia, and suddenly the floodgates were open, flowing toward a first state championship.

Shanahan scored 13 of the game’s final 14 goals, pitching a second-half shutout to win going away from Strath Haven, 13-5, at West Chester East, capping a district and states double in a storybook season.

Part of the explanation for the recovery came on the defensive end. Jeff Conner had a hand in three first-quarter goals, and Liam Carney scored twice to get Strath Haven, the third seed from District 1, out to a 4-0 lead, the goals rifled home in a span of six minutes.

But Shanahan adjusted, eschewing its man-to-man defense for zone and letting its active defenders do the rest. Ford was one, his stick constantly in passing lanes and disrupting passes. He and Connor Whalen combined for nearly a dozen caused turnovers and wreaked havoc on the Strath Haven attack.

Four strikes of the post or crossbar didn’t help the Panthers’ cause. But combined with a surge at the X from Tyler Kingsbury, Shanahan dictated the second half, outscoring Haven 9-0 after the break.

Ford got a goal for his trouble, just his third of the season, in the final minute of the third quarter in a representative sequence where he head-manned a break after picking off a pass.

“I was nervous when I came across midfield,” Ford, a Hofstra commit, said. “I thought we were going to get an offside. I caught it, I saw it (was) wide open and I was like, I might pass the ball, get it back. My instinct was just to shoot it wide open.”

The goal came five minutes after Gabe Goforth had put Shanahan ahead for the first time … and for good. The second of his four markers at 5:46 completed the fight back for a 6-5 edge. It came on a day where the sophomore midfielder, bound for the University of Maryland, put in an unusually exhaustive defensive shift.

“Out of all the games this season, that had to be the most I played defense,” Goforth said. “We kind of didn’t expect it. We came out slow, we weren’t stopping them. But then we slowly started getting our rhythm.”

“Shanahan started winning their one-on-one matchups, and they got good shots on the cage,” Strath Haven defenseman AJ Santisi said. “Sometimes stuff doesn’t go our way, and once they got the momentum, they rode it better than we did when we got our first four. We got it back when we got that fifth in the second quarter, but the better team won the game today.”

Shanahan needed a spark early in the second half and got it from an unlikely source: Dan Bathon. The midfielder entered with just nine goals, but he scored twice Saturday, dodging short-stick midfielders at 9:32 and 7:12 to get Shanahan off the mark. Goforth and Connor Heisman — off a tic-tac-toe transition from Whalen and d-middie Kyle Pollick — evened the score with 6:05 to half. Chris Rosini nudged Strath Haven ahead off Ethan Belville’s second assist at 3:26, but that was the Panthers’ last offense.

Every time Strath Haven threatened to turn the tide, it didn’t materialize. Carney rang the crossbar in the first minute of the third, before Andrew Smyth (goal, two assist) knotted the score.

Conner — who finishes the season with 96 goals and 155 points and his career with 408 points — hit the post in the third quarter and again in the fourth, the latter in an 8-5 game after a potentially momentum-shifting hit. But the seesaw wouldn’t tip back for Haven.

“He has great vision,” Ford said of Conner. “He’s a good player and he’s going to Virginia, so we definitely had to practice with our sticks up this whole week, and we knew that once he got around the corner sometimes, he has that low shot, so it’s definitely something we had to work on.”

That left a group of Strath Haven seniors, led by Conner and senior defenseman Ryan Morris, to be content with a program-altering run that fell one win shy of its ultimate goal.

“We changed the culture of Strath Haven lacrosse,” Santisi said. “No one’s going to go down their schedule and mark Strath Haven as an easy W. It’s going to be a game they circle and they’re going to have to prepare for it weeks ahead. It’s a different culture here now. I loved playing with this group of guys. Back in our sophomore year, we went to the semis and we knew we could get back here. It’s a new culture, and I can’t wait to see what they do with it.”

Shanahan poured it on with six goals in the fourth quarter, the last five in a span of 4:01. Heisman and Bryan Rafferty scored twice each. Kyle Gucwa added a goal and an assist. But even the offense’s primary protagonist understood what led Shanahan to hoist its first state title.

“It is huge,” Goforth said. “Defense wins championships, not offense. And that’s what we have.”