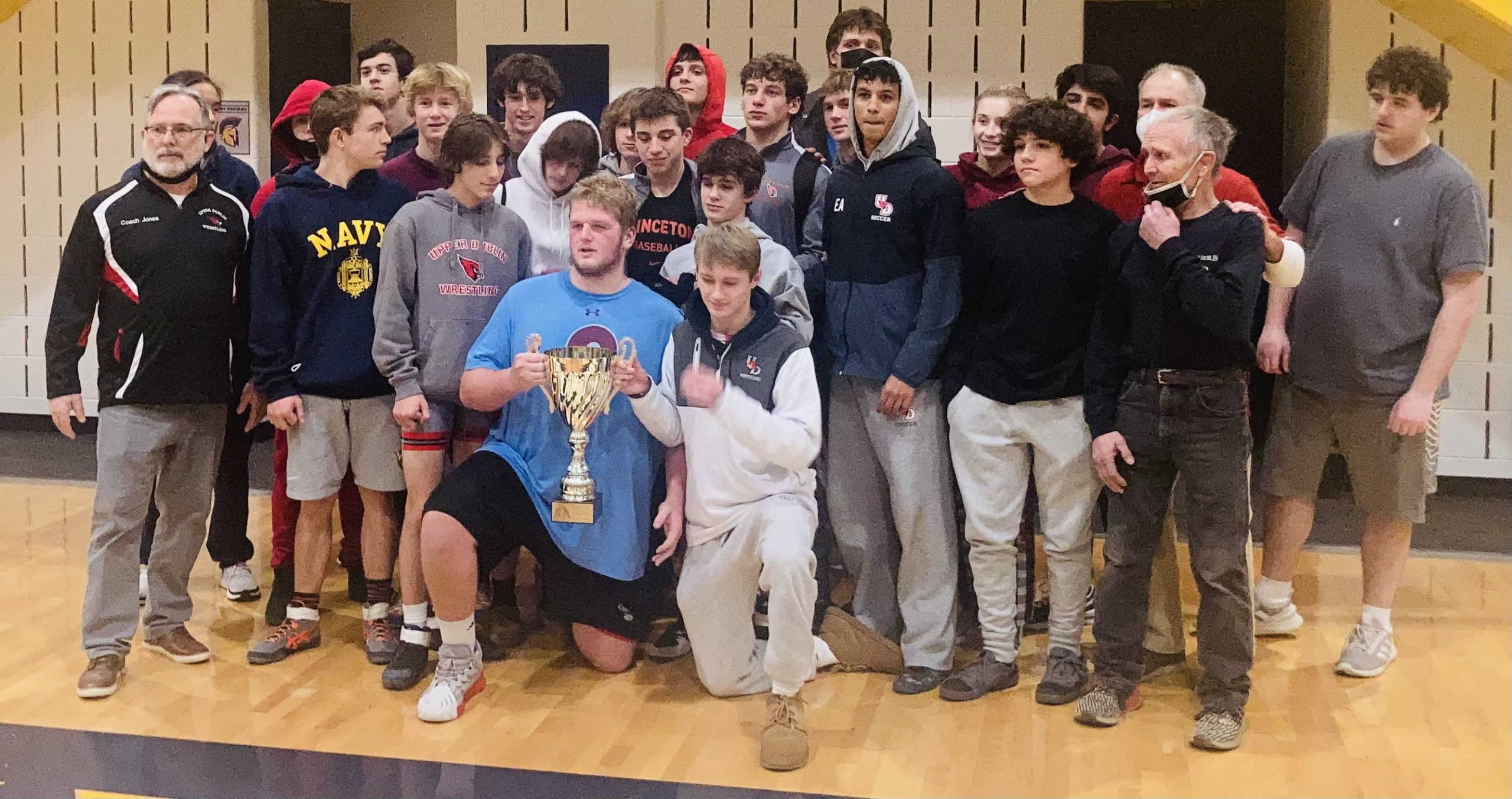 LOWER GWYNEDD >> The match began long before the mats were rolled out.

“I have the greatest respect for Stag. He and I have known each other a long time,” Upper Dublin coach Dave Jones said of Wissahickon coach Anthony Stagliano. “He and I work together and he was in my office today. And we were (razzing each other) — it’s a great rivalry.

“My heart’s in here, I wrestled in here. I’ve seen the lights a lot in here,” said Jones, a former standout at Wiss. “Over the 24 years I’ve been coaching, it’s always fun. This is the one we always circle on the calendar.”

C.J. Ambrose came up with a key victory for Upper Dublin in its win over Wissahickon on Wednesday, Jan. 19, 2022. Kev Hunter, MediaNews.

Upper Dublin’s cup runneth over on Wednesday night, as the Cardinals got pins where they expected them and a pin and other big victories where they didn’t expect them. It all added up to an impressive 42-20 win over rival Wissahickon, as Upper Dublin recaptured the Ambler Cup for the first time in five years.

“Right out of the box, we went hard,” Jones said. “Even in the places where we usually struggle, we still wrestled well. The matches we lost, we didn’t get stuck, and that had been our downfall all season. I think everybody wrestled really well. The kids stayed in the match, stayed focused.”

The Cardinals flexed their strength in the middle, beginning the match with pins at 120 (Caden Cerminaro), 126 (Colin Higgins) and 132 (Dan Gorman). And then C.J. Ambrose came through with a surprise pin at 138, going against Grant Dries of Wiss.

“They bumped a guy up to face me,” Ambrose said. “I was able to jack a bar in, turn him, and it was great. That was huge for me. I started off well this year but then got into a funk. I had some self doubt and even my dad was like, ‘you look a little off.’

“I’ve definitely proven over the last week that my mind’s been in the right place. This cements it for me.”

Upper Dublin had a 24-0 lead at that point and two forfeits by the Trojans widened the margin to 36-0. That all but locked it up for the Cards, who raised their Suburban One League Liberty Division record to 1-2.

Wissahickon watches the action during its match with Upper Dublin on Wednesday, Jan. 19, 2022. Kev Hunter, MediaNews.

Upper Dublin aims to use this win over its friendly but fierce rival as a momentum builder for the stretch run.

“It was awesome. It’s a great feeling. It means everything,” said Ambrose. “After the tornado (and the damage to the gym back in the fall), we were able to go over there and they were helping us out. I love coach Stag,” Ambrose said of the former standout at Springfield Montco and longtime Wiss coach, “but he was trash talking, saying they were gonna bring the cup back again. So it felt awesome to take it from them.”