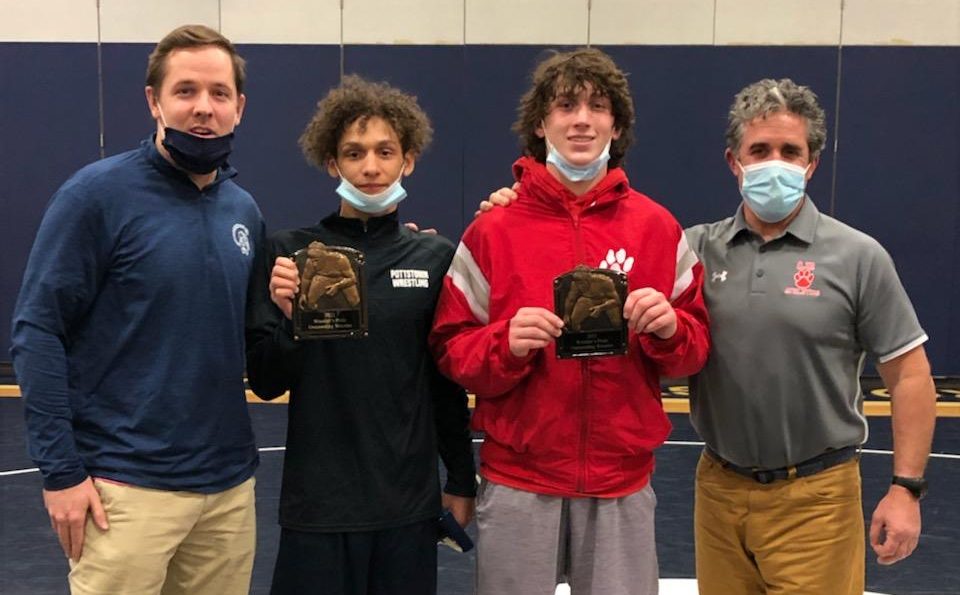 POTTSTOWN >> It was a sure cure for what’s been ailing them.

Owen J. Roberts has been working the first month of the season to get a number of injured wrestlers into their varsity mix. This past week, a COVID-19 incident impacted the program.

But getting the opportunity to compete Friday against Pottstown, the Wildcats made the most of the situation afforded them.

They rolled their neighboring rivals, 51-18, in a non-divisional pairing of Pioneer Athletic Conference member schools.

In the match billed as Pottstown’s “Takedown for Cancer” event, Roberts (2-6) flexed some very healthy muscle on the mats. It took nine of the weight classes — each team received pairs of forfeits — and racked up bonus points in each bout, scoring five pins alongside a technical fall and a major decision.

“We’re grateful for the chance to come and wrestle,” OJR head coach Steve DeRafelo said. “It (COVID) hit hard … a lot of kids had it. We’re hoping it’s run its course.”

Matt Englehardt, who got his tech-fall at 132 in before the second-period buzzer, echoed his coach’s sentiments about opportunities presented.

“We’re happy we got to wrestle,” the Owen J. senior said. “We’re seriously grateful to get the opportunity to wrestle.”

Dillon Bechtold, Owen J.’s recipient of the Outstanding Wrestler award presented to wrestlers from both teams in the annual matchup, added a 13-3 major as the final ‘Cats scoring.

“He’s got a big motor,” DeRafelo said of Bechtold, a sophomore whose 15-3 record leads the team. “He doesn’t stop moving against other kids. He’s done a ton of work, and it shows now.”

Englehardt worked particularly hard, in the second period of his bout, to secure the tech-fall. He rang up three near-falls after escaping from a bottom start, the last two three-pointers.

“Our lineup has been going up and down,” Englehardt added. “We’ve had people working to fill the spots.”

In keeping with his plan, DeRafelo held a coaching moment during the team’s post-match huddle, having two of his wrestlers demonstrate a move being focused on.

“Every time we wrestle, we want to get better,” he said. “This was a technical area … we have a lot of young kids, and they have habits that need to be fixed.”

Pottstown’s contested points came from Kareem Lesher, a 6-5 winner over Braden Houseman at 126; and Tyrese Washington, who outscored Joey Calamore at 189, 8-6. Lesher was named the Trojans’ OW.

“I was confident we were going to have the match,” Pottstown head coach Nick Wade said. “It’s something, the way the season sneaks up on you.”

Lesher saw his initial 4-2 lead erased when Houseman scored a third-period escape and takedown off a bottom start. But the freshman executed a reversal inside the final 30 seconds for the one-point victory.

Washington found himself in a near-identical situation at 189, the Trojan sophomore trailing Calamore 5-4 after two periods. Starting the third on his feet, Washington bookended takedowns around Calamore’s escape from the first to complete the close decision.

“We’re doing as well as I thought in the preseason,” Wade said. “We’re young. This was Tyrese’s fourth match ever. Kareem stepped in at 26 … he’s been working hard in the room.”

NOTES >> Quinn Carr (106) and Lucas Zachesky (113) were Owen J’s recipients of forfeits, as were Destyn Snyder (285) and Nahzier Booker (215) for Pottstown. … Roberts’ upcoming schedule has it in the Rock Yard Duals at Council Rock North this weekend, and the prestigious Escape the Rock tournament at Council Rock South next weekend. It will be joined at the Rock Yard Duals by PAC opponents Pottsgrove and Spring-Ford. “Right now, it’s all hands on deck,” DeRafelo said. “This is a good opportunity for some of our kids to get experience, and for us to see them.”