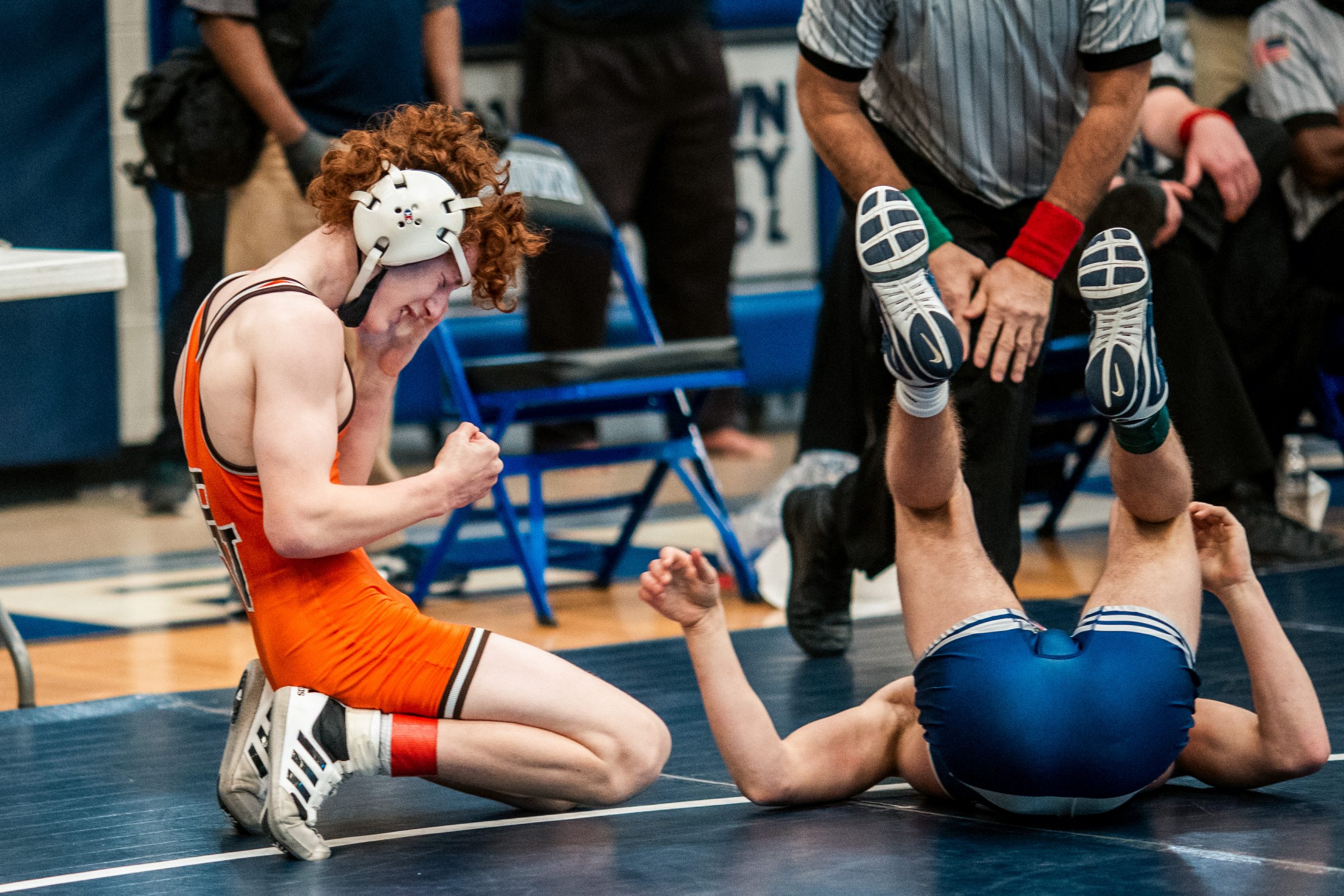 Perkiomen Valley's Kelly Kakos became the second wrestler in school history to clinch a state medal with a win over Austin Smith of Abington Heights, in the 138-pound consolation semifinal. (Nate Heckenberger - For MediaNews Group)

QUAKERTOWN >> It was a fast and productive time for Kelly Kakos Saturday.

A memorable one, too.

Kakos achieved several goals – one of them historic – during the PIAA East AAA Super Regional at Quakertown. The Perkiomen Valley sophomore earned himself another week’s worth of post-season experience as he placed third in the 132-pound weight class, in the equivalent of getting through the “blood round” of the PIAA Championships in this year of coronavirus-influenced scheduling changes.

Along with a bronze medal, Kakos secured a first-time trip to Hershey’s Giant Center for the second phase of states, where all qualifiers are assured medals.

The PAC’s other Hershey-bound grappler among the lowerweights is Boyertown’s Chance Babb, who also placed third at 138.

The East Super Regional was contested in split sessions with the lower weights (106-138) going in the morning while the upperweights (145-285) competed in the evening.

“I was confident I could make something happen,” Kakos said after picking up his latest medallion this winter. “All my goals were set.”

Kakos, whose previous post-season foray ended with a 2-2 at the 2020 South East AAA Regional, capped a 3-1 day by pinning Nazareth’s Dominic Wheatley in under two minutes in the third-place bout. It followed a 3:52 pin of Abington Heights’ Austin Smith in their consolation semifinal, the response to a major-decision loss at the hands of semifinal-round opponent Matt Mayer of Bethlehem Catholic.

And he didn’t have to look far beyond his house to find support and inspiration for his heady post-season run.

“My family helped me a lot through the past weekend,” Kelly said. “I had friends text me through the day encouraging me.”

A particular source of support came from older brother P.J., a teammate during his 2019-20 season.

“P.J. came into the (wrestling) room this week and helped coach me through the positions,” Kelly recalled. “He knows what needs to be done.”

Kakos (14-1) got his big day going with a 5-2 decision of Emmaus’ Nick Velde prior to his semifinal loss to Mayer. He returned to Quakertown, site of the District 1-AAA North tourney where he was a weight-class champion, as the South East runner-up with hopes of making it to Hershey.

“As soon as I got off the mats, it hit me,” he said. “The stakes are definitely going to be higher for me the next couple years.”

The Boyertown junior Babb roared through the consolation bracket after a semifinal-round loss to Bethlehem Catholic’s Andrew Harmon, pinning Northampton’s Christian Fritz in 1:48 to qualify for Hershey and a third-place duel with Kennett’s Trent Kochersperger.

A key to Babb’s success is the use of his legs in matches. That was particularly evident in the bouts with Fritz and Kochersperger.

“It’s one of my strengths … a thing I look for most of the time,” Babb (11-2), who came to the super regional as the South East region’s second seed, said. “It’s one of the things I do better than most people.”

Babb’s state-medal qualification is several steps up from his Hershey experience as a sophomore, where he was finished after a pair of losses. He admitted the day’s work took some pressure off him.

“But I’m not looking to finish eighth,” Chance said. “I want to get to the top.”

Four other PAC qualifiers saw their state-level runs end shy of medal finishes. Two of them got closed out with appearances in the tourney’s 5-6 place bouts.

Spring-Ford’s Cole Smith and Boyertown’s Jay Maldonado placed sixth at 106 and 120, respectively. Maldonado saw his scholastic career end with a loss to Bethlehem Liberty’s Javien DeLeon. His bid to qualify for a state medal was thwarted by a narrow 4-3 decision by Wallenpaupack’s Gunnar Myers in their consi-semifinal.

Smith, in turn, finished his state-tourney run by forfeiting the 5-6 match to West Scranton’s Tyson Cook. They met in the quarterfinal round, where Smith (15-3) rolled up a 7-2 decision before being edged by Abington Heights’ Luke Sirianni 6-5 and pinned by Council Rock North’s Tony Burke.
Spring-Ford’s Dominic Ortlip (113) and Boyertown’s Gavin Sheridan (106) went 0-2 in their respective brackets.