Owen J. Roberts’ Quinn gets win No. 100 at PIAA Championships 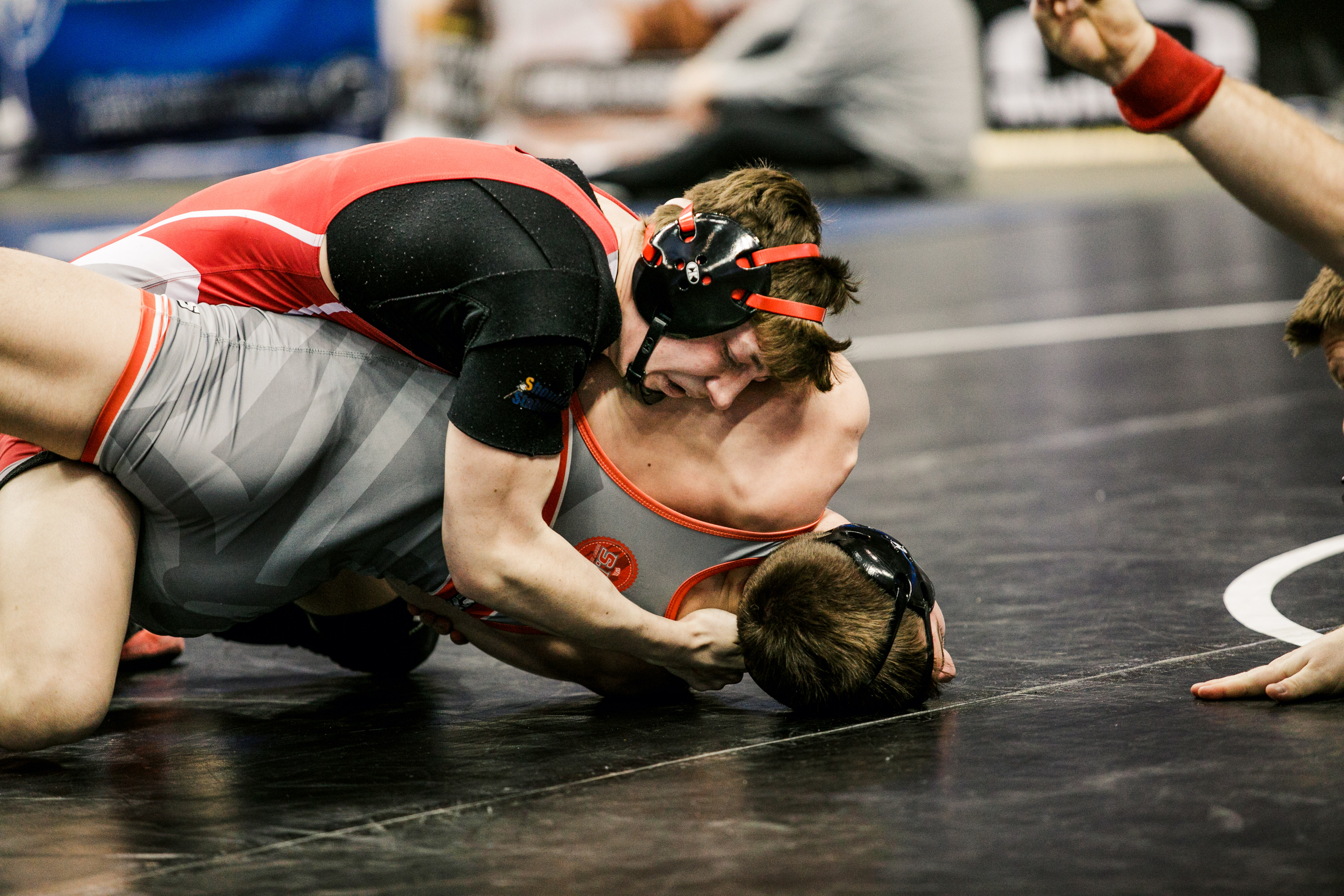 HERSHEY >> The Giant Center public address announcers have been punctual and thorough in announcing wrestlers who reach the 100-win mark during the PIAA Championship tournament.

Connor Quinn’s mother was on top of that news all along. It was she who advised her son of his latest mat accomplishment Friday, after he did it in the consolation round of the Class AAA bracket’s 160-pound second-round consolations. “I forgot about it, too, until after I wrestled,” the Roberts junior said following his 13-11 victory over West Allegheny’s Ty McGeary. “I looked up into the stands at my mother, and I saw she was holding up a banner saying that.”

The milestone win kept Quinn in the hunt for a state-level medal in the wake of his first-round loss Thursday. It was one of the highlights for the Pioneer Athletic Conference contingent, standing alongside quarterfinal-round wins by teammate Daniel Mancini at 152 and Spring-Ford’s Joey Milano at 182 while Pope John Paul II’s Ryan Vulakh rolled into the 152-pound final in Class 2A.

And doing it in the highly-charged atmosphere of the Giant Center was another plus.

“It’s definitely a crazy environment here,” he said. “Doing it here makes it so much better.” The achievement took some sting out of Quinn’s first state bout, where he was edged by Gettysburg’s Dylan Reinert, 10-9. He was reminded of the shoulder he injured earlier in the season during the bout.

“I dislocated it a couple times,” he recalled. “I was mentally beat, too, because of it.”

Quinn rebounded from that loss by pinning Dallastown’s John Ligon in 40 seconds Thursday. Qualifying for the medal round wasn’t to be, though, as his season ended with an 11-4 loss to Mars’ Jake Richardson.

Mancini and Milano came out of Friday’s AAA session as the PAC’s lone grapplers in contention for state gold. Mancini reached Saturday’s semifinal round with a 10-6 decision of Hershey’s Tanner Updegraff, and Milano did the same off a 14-5 major decision of Easton’s Dominic Falcone.

“It was always my goal since the beginning,” Mancini said. “I think back to my sophomore year, when I didn’t place. And the next year, when I was fourth, I remember being on the podium and wishing I was on the top step.” Spring-Ford’s Joey Milano collects back points against Easton’s Dominic Falcone in a 14-5 major decision in the 182-pound quarterfinals. (Nate Heckenberger – For MediaNews Group)

Mancini (35-3) will face Bethlehem Catholic’s Cole Handlovic in the semis. He could be looking at a championship rematch with Kiski Area’s Cam Connor should both win their next matches.

Milano (44-2) will go against Erie Cathedral Prep’s Carter Starocci in his bid for a first-ever state gold medal. His drive continues to be fueled by an injury-shortened post-season in 2018.

“All year I wanted to work for this … all my life,” he said. “I saw this last year, and I came back even harder.” The PAC’s list of medal qualifiers was reduced to four in Friday’s “blood round.” Mancini and Milano are joined by OJR’s Antonio Petrucelli and Boyertown’s Julien Maldonado, both of whom are in the medal round for the first time.

Maldonado (37-14) eked out a 1-0 decision on Downingtown East’s Keanu Manuel in the third round of consolations at 106, and Petrucelli (42-9) qualified with a 3-2 decision of Erie McDowell’s Jeffrey Boyd, a returning state champion.

One of the more heart-wrenching ends to a season and career was experienced by Jacob Miller. Boyertown’s senior 195-pounder, shooting for a spot in the medal round, found himself in a rematch with Great Valley’s Ethan Seeley in their third-round consi.

The titans faced each other twice in previous post-season tournaments, Seeley prevailing in the District 1-AAA North competition and Miller winning their Southeast AAA Regional clash last weekend. This time, it was Seeley scoring a 3-1 decision to end Miller’s career with a record of 108-42. He’s one step away from applying the perfect end to a perfect wrestling season.

Suffice it to say, Ryan Vulakh is sticking with what got him to the lofty perch he occupies.

Vulakh will be seeking a state gold medal — a first for his scholastic career — when the PIAA Championships resume Saturday at the Giant Center. The Pope John Paul II senior will take on Freedom Area’s Trent Schultheis in the 152-pound title bout when the Class AA brackets stages its medal round starting at 2 p.m.

And his approach will not change from his compilation of a 34-0 record and a run of pins and technical falls that have marked his post-season.

“It’s the same thing: score points,” he said following Friday’s semifinal win over Sharon’s Sully Allen. “This was instilled in me as something to do. It’s about scoring points.”

Vulakh did that against Allen, running up a 17-2 lead by the 3:34 mark in the semifinal. Earlier in the day, the George Mason commit dispatched St. Joseph’s Academy’s Keegan Rothrock in a 2:52 pin, that after compiling a 7-1 lead in the first period and upping it to 10-1 in the second.

Claiming AA gold will be an improvement on his previous state trips. He was third in Class AAA at 145 one year ago, and eighth at 132 as a freshman competing for North Penn.

“I’m super excited about it,” he said. “This is not like wrestling the local kids.”

Ryan’s younger brother, Matt Vulakh, will also be looking at an upgrade to the eighth-place medal he got in Class AAA competition last year. He will wrestle for seventh place against Brandywine Heights’ Noah Frack.

The younger Vulakh (27-10) dropped into the 106 consolations with 4-2 loss to Chestnut Ridge’s Kai Burkett in his first bout Friday. He rebounded with a 1-0 decision of Faith Christian’s Eric Alderfer in their third-round consi, but he was blanked by Athens’ Gavin Bradley in the fourth round, 4-0.

NOTES >> Quinn was preceded in achieving 100-win fame this winter by teammates Antonio Petrucelli (106) and Cole Meredith (104). … Methacton’s Kibwe McNair came up short of matching Quinn’s entry into the 100-win fraternity, the Warrior junior stopped at 99 by an 8-0 major decision from Penn Trafford’s Nick Coy. … The Class AA medal round will start at 2 p.m. Saturday, with the Class AAA session at 7 p.m.