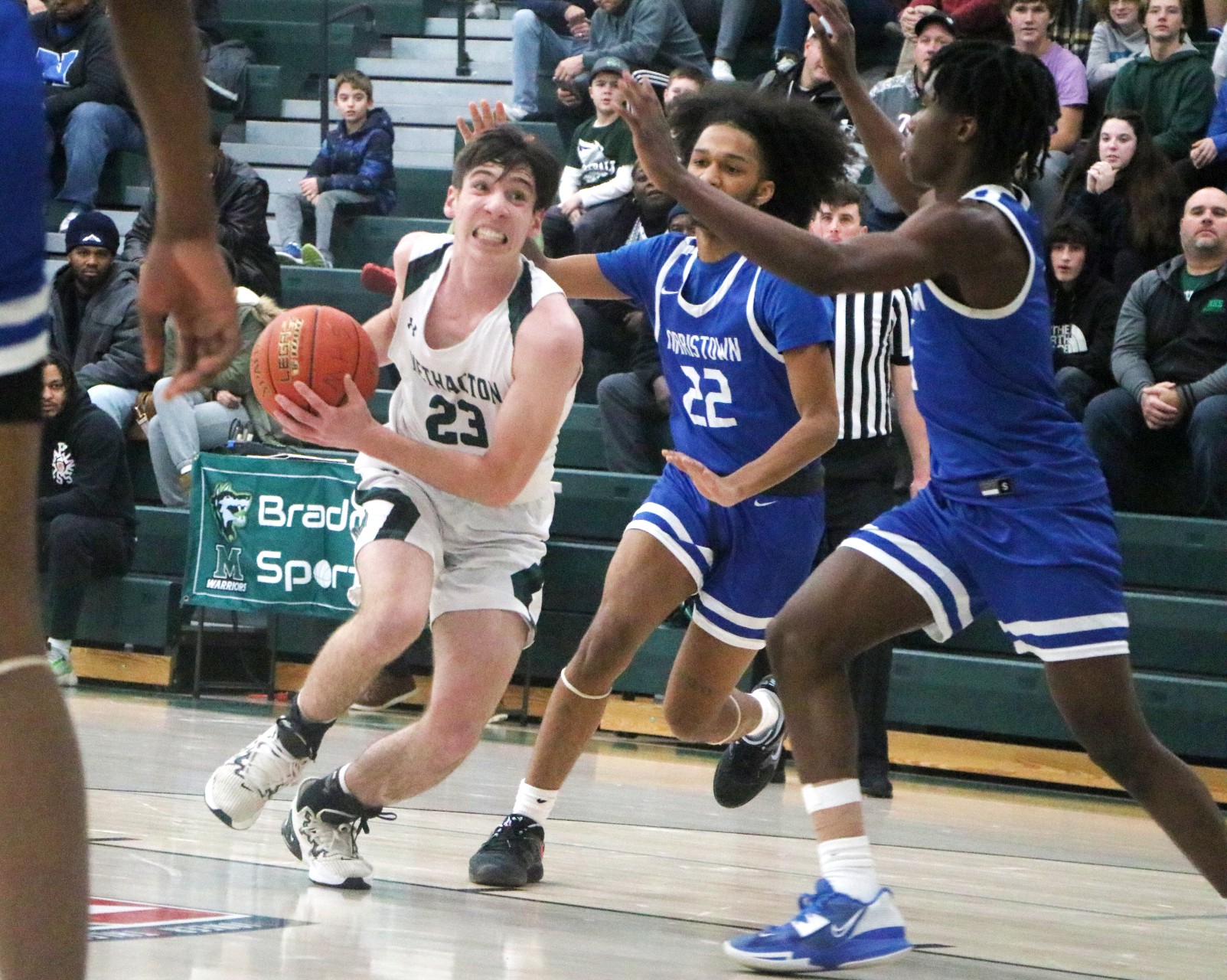 FAIRVIEW VILLAGE >> The stakes, speed and tempo were all to Alex Hermann’s liking.

The 6-foot-3 Methacton forward was all smiles when asked about the pace of Tuesday’s anticipated tilt between his Warriors and Norristown.

“It seemed really up to speed, which I like,” Hermann said. “I felt we controlled the pace in the second half. The first half was kinda both teams. That second-half pace was really key for us.”

With second place of the Pioneer Athletic Conference Liberty division on the line, both teams went blow-for-blow through three quarters. It wasn’t until late in the fourth frame that Methacton began to pull away, enough for an 82-75 win at home.

Hermann found 15 of his game-high 28 points in the second half. Matt Christian, who has led the Warriors’ in scoring this season at 15.2 points per game, put up 21 and sophomore guard Sal Iemmelo added 13.

“We were just pressuring and communicating better and talking,” Hermann said. “We also made an adjustment to switch on the screens instead of iso it, so that helped us to keep getting touches on them.”

Neither squad gained much ground over the other through the first 24 minutes of play. Both teams traded leads that never expanded beyond five points and the Warriors held a 39-37 advantage heading into halftime.

Before Hermann dialed up, senior guard Jaden Wise was shooting the lights out for Norristown (9-9, 4-3). In the first half alone, Wise amassed 21 points and sank five shots from 3-point range.

But the Warriors tightened up around the perimeter and limited opportunities for the Eagles’ shooters on the outside on a night where they were red-hot with 13 3-pointers altogether. Wise was held to six points in the second half for a team-high 27 on the night.

“We’ve had teams the past three games shooting the ball well from the perimeter, so we talked at halftime about really trying to defend them with stronger closeouts and eliminating second-chance opportunities,” Methacton coach Pat Lockard said.

Norristown was able to move the ball and spread the wealth, getting everyone involved offensively with four players scoring double-figures. Upperclassmen guards Jayden Byrd (16 points) and Andre Gordon (11 points) both got theirs from inside the key and out while Myon Kirlew added 13.

The Eagles have been in a number of tight games this season. Heading into the week, they’ve been averaging 55.8 ppg on offense and allowing 54.3 on defense.

“We were better off the bounce, trying to attack. But we have to defend. At the end of the day, we have to defend,” Norristown coach Rick Bell said. “We don’t get better with that, there’ll be some long nights for us.”

Ranked No. 16 among District 1 Class 6A teams, the Eagles have divisional games against Perkiomen Valley, Boyertown and Owen J. Roberts to close out their regular season.

Having rebounded from a 1-6 start and vaulting into PAC contention, Tuesday was a blow for a group that’s on the cusp of making the conference tournament. Norristown reached the District 1 final last year and with a much younger group in 2022-23, the Eagles are still finding themselves defensively.

“We work on it; it comes down to defense. A lot of heart needs to go into that,” Bell said. “There are Xs and Os and schemes and whatever are involved, but most of it’s heart. I’m not saying our guys don’t have heart, we just gotta do a better job.”

Christian is averaging 15.2 ppg, sixth most in the PAC. pic.twitter.com/Qqa3INTZvt

Recent years have been bountiful for Methacton with four of the last five PAC titles and six in the past decade. Ranked No. 8 in District 1-6A and holding onto second place in the Liberty behind Spring-Ford, the Warriors are right in the race to keep their dynasty going.

“This was a huge game, especially after losing to Upper Merion last week. That hurt us and this was a huge game. Biggest game of the season so far,” Hermann said. “Hopefully it puts us in a good spot for PAC playoffs and districts too.”