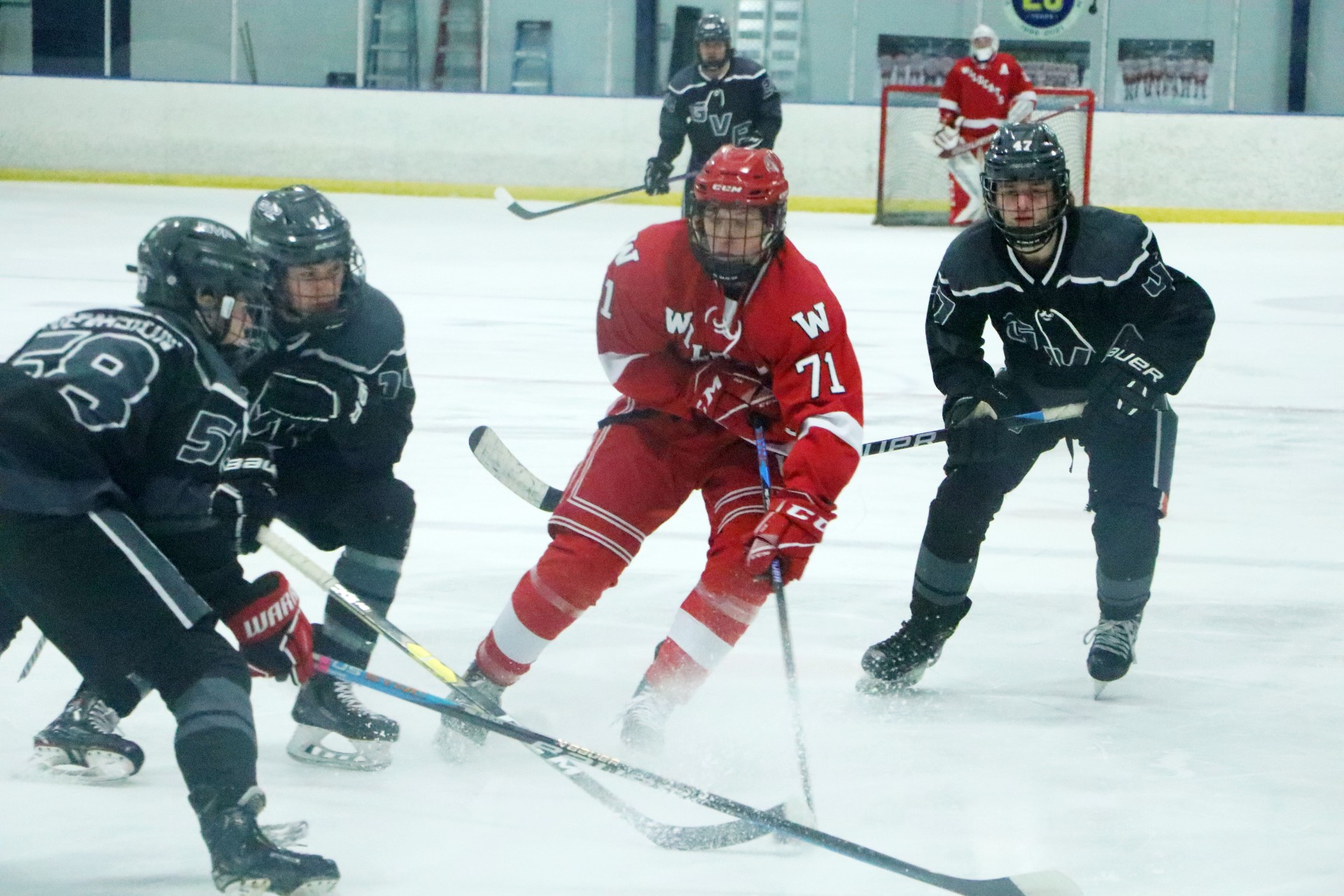 OAKS >> Ryan Jasudowich recalled the sting of being bounced from the postseason last year.

The senior Great Valley-Phoenixville forward had his season come to an end in the Inter County Scholastic Hockey League semifinals last winter at the hands of Owen J. Roberts. On Friday, the co-op punched back.

After jumping out to a 3-0 lead late in the second period, Great Valley-Phoenixville fended off a late effort from the Wildcats after the latter cut the game to one goal in the third to escape with a 4-3 win at Center Ice.

“They knocked us out of the playoffs last year, so it feels good to finally get ‘em,” Jasudowich said.

Wildcats come up just short of a comeback, GV-Phoenix moves into first place of the Pioneer division. pic.twitter.com/AlMqmkQKL6

Both teams entered the game tied for first place of the Pioneer division with 7-2 records. With the win, Great Valley-Phoenixville (8-2) is now in the driver’s seat.

Jasudowich scored two goals on the night, his initial goal being the first of the game on a power play with 3:05 to go in the first period. His second came 35 seconds into the third frame to create a 4-1 cushion for Great Valley-Phoenixville.

Great Valley-Phoenixville’s third unanswered goal once again came on a power play after a roughing call. With 1:05 left before the second intermission, Broden Foley found the back of the net on the man-advantage to cap the 3-0 run.

“When we go on the power play, our power play is deadly. It was a good play by Caleb (Redman) on his knees, not even on his feet passing it right to me and I just kind of hit it and it went in,” Jasudowich said, noting his first goal with Redman on the assist.

P2, 1:05 — Broden Foley nets one just before the second intermission.

Owen J. Roberts (7-3) didn’t get on the board until there were 39 seconds left in the second period. Sophomore forward Luke Armstrong buried one off a setup from Brady Callahan and Jake Saunders to snap Great Valley-Phoenixville’s scoring run.

After Jasudowich’s second goal, the floodgates opened for the Wildcats throughout the third period.

Charles Davis dumped the puck to Joseph Bacallo and the latter flicked it in near the crease to cut Owen J. Roberts’ deficit 4-2 with 8:51 left. With six minutes remaining, Davis once again fueled a goal by connecting with Grady Jones on a wraparound, cutting the game to a single score.

“We’ve been down a lot but we like to battle back,” Towler said. “Monday night, we were down (against Spring-Ford) 4-1 but we brought it 4-4 into overtime to win 5-4. It’s kind of in us, coach (Chuck Gorman) always tells us to never quit and we have a strong leadership group that really helps us.”

Chief among that leadership group is Davis. The senior forward leads the league in both goals (18) and assists (21) for a league-high 39 points.

Davis’ two assists helped springboard Owen J. Roberts not only into the game, but right into contention down the wire before Great Valley-Phoenixville pulled out of the jam.

“It’s great to play with someone like that,” Towler said on Davis. “He’s not just a scoring playmaker, he really sets a good example for a lot of the younger guys, freshmen and sophomores who are learning how to play high school hockey. He really helps our offense as a whole.”

Both teams racked up six penalties apiece, but while Great Valley-Phoenixville was able to capitalize on two man-up opportunities, the Wildcats were met with a stout penalty kill on their offensive end of the ice.

Great Valley-Phoenixville was sent to the box three times in the first and second periods alike, but the act was cleaned up in the third, allowing enough men on the ice to combat Owen J. Roberts’ swarming offense.

“We had to try to keep out of the box, but that didn’t work,” Great Valley-Phoenixville coach David Stewart said. “We did a great job killing the penalties. Our forecheck was dominant, we were able to keep them pinned in the zone. Overall great team effort defensively.”

Owen J. Roberts freshman defenseman Richard Pupek wraps around the net with the puck in a game against Great Valley-Phoenixville at Center Ice in Oaks on Friday. (Evan Wheaton – MediaNews Group)

Owen J. Roberts is now neck-and-neck with Perkiomen Valley in the Pioneer race, both a game behind first place.

The Wildcats won out the Pioneer last year and with four more games — including a matchup with the Vikings on Feb. 1 — Owen J. Roberts is right in the heart of the race to raise the divisional banner once more.

“We earned it last year, so we know we have to earn it again,” Towler said. “We know how tough it can be and there’s a lot of competition, but we just have to keep fighting.”