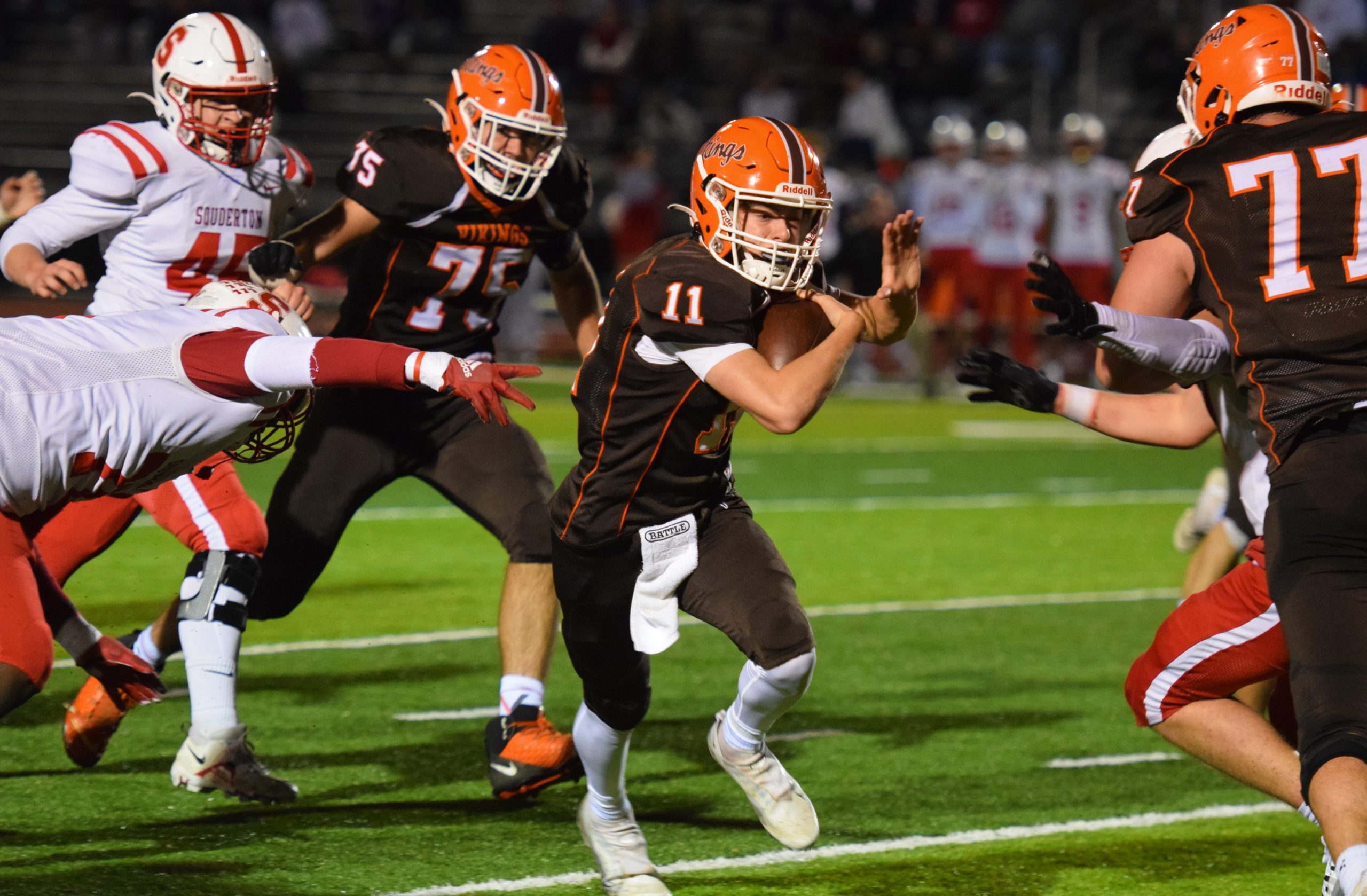 GRATERFORD >> What makes a great defense?

During the regular season, it’s shutouts and lopsided final scores.

But in the playoffs, the margins and the windows get smaller and tighter. Such lofty statistics just aren’t realistic, and the definition changes.

A great playoff defense does what Perkiomen Valley did in Thursday night’s 27-14 victory over Souderton – they move on quickly from their opponent’s big plays and re-establish authority over the game. Perkiomen Valley’s Carson Pascoe (5) reacts after his game-sealing interception in the fourth quarter against Souderton during a District 1-6A playoff game on Nov. 10 at Perkiomen Valley. (Austin Hertzog – MediaNews Group)

“We talk about being an all-around defense – winning the turnover battle, creating big plays of our own,” said Carson Pascoe, whose late interception sealed the win for the No. 2 seed Vikings at Thomas J. Keenan Stadium.

In fact, both Souderton touchdowns on the evening were followed by Perkiomen Valley interceptions on the Indians’ following drives – Pascoe’s aforementioned game clincher in the end zone with 2:25 to play, and a pick by Sam Koehler who set the Vikings up in the red zone for a touchdown just before halftime.

“They had the momentum,” said Koehler, “but our pass rush made that play when they pressured the quarterback. I was just in the right place at the right time.” Perkiomen Valley’s Carson Pascoe (5) breaks up a pass intended for Souderton’s Danny Dyches (6) in the end zone during a District 1-6A playoff game on Nov. 10 at Perkiomen Valley. (Austin Hertzog – MediaNews Group)

In between the big plays from Souderton, PV’s rushing attack dictated the tempo. Sophomore quarterback Patrick MacDonald had scoring runs of 46 and 32 yards, while Ryan Klimek broke the century mark with 110 yards rushing and a score of his own.

“The run game is nothing without our offensive line,” said Klimek. “Me, I focus on little things – extra points, for example. Because they turn into big things at the end of games.” Perkiomen Valley’s Ryan Klimek (7) is tackled by Souderton’s Danny Dyches after a solid gain during a District 1-6A playoff game on Nov. 10 at Perkiomen Valley. (Austin Hertzog – MediaNews Group)

A combination of PV’s stingy defense and repeated pre-snap penalties combined to give Perkiomen Valley short fields on each of their first two possessions.

Souderton’s defense forced, and then blocked a field goal on the Vikings’ first foray and forced a fourth down from their four-yard line toward the end of the opening quarter.

But a pair of tough Jake Stewart runs picked up the first down, then opened the scoring with a 1-yard TD run as the quarter expired. The extra point failed, keeping PV’s lead at 6-0.

For their part, Souderton didn’t attain a first down until their third drive, about two minutes into the second stanza.

Their breakthrough came when QB Jared Zimmerman connected with Danny Dyches for the first of the duo’s two scoring passes on the evening to give Souderton a 7-6 lead with 6:21 left before halftime. Souderton’s Danny Dyches (6) runs for the end zone on a touchdown reception against Perkiomen Valley during a District 1-6A playoff game on Nov. 10 at Perkiomen Valley. (Austin Hertzog – MediaNews Group)

The lead, however, was short-lived as PV’s MacDonald would keep on a third and short — breaking the Vikings’ tendency to go to Stewart in short yardage — and sprint untouched for a 46-yard score only two minutes later.

The momentum moved more decisively in PV’s direction on the very next play from scrimmage when Pascoe flushed Zimmerman from the pocket. The QB’s attempt to throw the ball away landed instead in the hands of PV linebacker Koehler, who returned it to the 15-yard line of the visitors.

One play later, Klimek found the end zone, and the Vikings had a 20-7 lead.

Out of the half, the Vikings forced a second turnover after Souderton crossed into PV territory for only the second time. Vance Junker’s recovery of a botched snap thwarted what appeared to be a promising Indians drive.

The ensuing drive would end on downs, but another Souderton three and out was followed by MacDonald’s second long TD run of the evening, this one a 32-yarder after breaking away from would-be tackler in the backfield. The lead, now 27-7, appeared safe. But Souderton, which finished the year 9-3, wasn’t about to go quietly.

“We have 12 seniors on this team – and a few of them weren’t available tonight,” said Souderton coach Ed Gallagher. “I couldn’t be prouder of them.

“They won a District championship as sophomores, three straight years in the playoffs. Impressive careers, and they have very bright futures.”

Zimmerman and Dyches connected again for a 61-yard scoring pass in the fourth quarter. The duo stood out statistically on the evening, Zimmerman passing for 218 yards and the two TDs, and Dyches finishing with five catches for 130 yards. Perkiomen Valley’s Drew Kenworthy (16) is congratulated by Carter Euker (17) and another teammate after making an open-field tackle against Souderton during a District 1-6A playoff game on Nov. 10 at Perkiomen Valley. (Austin Hertzog – MediaNews Group)

But after Aidan Scott picked off MacDonald around midfield for PV’s only turnover, the teams traded punts before Pascoe sealed another home game for Perk Valley (11-1) in next week’s District 1 6A semifinal against the winner of Friday’s contest between North Penn and CB West.

“It’s known – our student section, our fans are great,” said Pascoe. “There’s no better atmosphere. It’s great playing at home – when we make plays our fans really give us a lift.”

It’s the first trip this deep into the playoffs for Perkiomen Valley since 2016, which was coach Rob Heist’s first year at the helm.

“I think our kids expect to win every time we step on the field, regardless of talent, size, or speed. We’ve built that confidence, and bought into playing team football – 11 men, on both sides and in all elements of the game.”