Methacton’s Nouaime and Liang repeat as PIAA 3A doubles champs 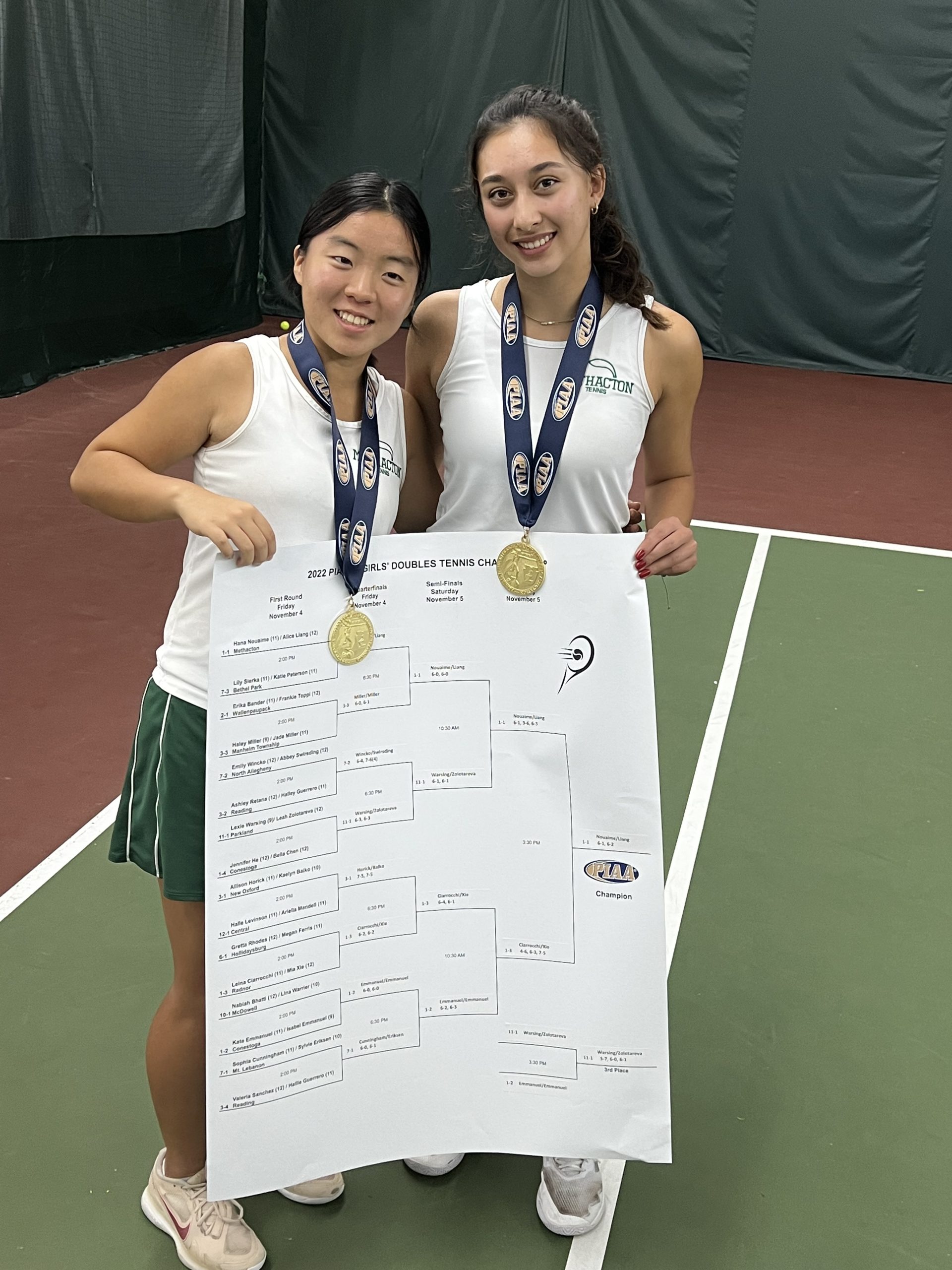 Most high school tennis players that advance deep in the postseason are obsessed with individual accolades.

Then again, Methacton’s Hana Nouaime and Alice Liang are not like most high school tennis players. The duo defended their PIAA Class 3A doubles title in convincing fashion on Saturday at the Hershey Racquet Club.

“I am super happy,” Nouaime said. “I am really happy with the way we played. I am just very happy to end my season with Alice. ”

Nouaime still just a junior and Liang, a senior, knew this was their final hurrah after their third consecutive PIAA final. The focus all season was repeating the title from a year ago despite being the hunted in Hershey this year.

“I am happy we could do it,” Liang said. “Coach Jill (Walker) said there was no pressure. We felt like there was a lot of pressure.”

Although Liang and Nouaime were confident they were the class of District 1, they were in for a surprise in the semifinals. That’s when District 11’s Parkland freshman Lexie Warsing and senior Leah Zolotareva made a name for themselves, taking the Warrior duo to the limit in a three-set thriller.

“They were the sleeper of the tournament,” Walker said of Parkland’s team. “They ended up in third. They were definitely the surprise of the tournament. I knew they were strong from talking to other coaches. We were sweating on that one.”

In the end, Nouaime and Liang gutted out a 6-1, 3-6, 6-3 marathon of a victory despite being forced into playing out of their comfort zone. The Parkland duo played a more patient style with lots of lobs and down-the-line shots. The match wasn’t decided until Nouaime was able to hold serve at 5-3 in the decisive set.

“I was very stressed out,” Nouaime said. “They were doing things we weren’t used to. They were hitting very high balls and down the line shots. It took some adjusting. We became more relaxed and everything came together.”

Although the 6-1, 6-2 score in the finals sounds like a cakewalk to the title, it wasn’t as easy as the scoreline might suggest. But having already beaten Radnor in the District 1 Tournament, Nouaime and Liang won the key points and dictated the match at the net.

“It wasn’t a cakewalk,” Walker said. “Radnor played pretty well. They had to get to net and put it away. We had some, good exciting things at net.”

So, Nouiame and Liang end their doubles’ careers together with their third straight appearance in the PIAA finals and second straight gold medal. It was just an idea a few years ago. This year there was a different determination as they both skipped the PAC Singles Tournament for fear one of them might advance to states.

“It’s definitely a relief,” Liang said of the title. “We are really happy to do it. This is what we were aiming for. I am happy with the result.”

As for next year, it will have a much different look in Hershey. The aggressive net play of both Nouaime and Liang won’t be on display. It very well could be a wide-open doubles tourney.

“They come up to net to end points,” Walker said of Nouaime and Liang. “You don’t see that a lot. They proactively set up the point. They are up at net at the same time, you don’t see that in a team much less one of them.”

While Liang will be graduating, Nouaime has one more year left. A different kind of gold medal next year?

“I will try to play for states in singles,” Nouaime said. “We will see what happens.”

Spring-Ford’s Mia Matriccino became the first player in either boys or girls tennis to make the state singles tournament, win a round and medal in the school’s history. Matriccino took a 6-1, 6-1 win over Liberty’s Helena Lynn to take her place on the podium.

“She served obviously really well in that third-place match. She was able to stay really aggressive and was able to execute a lot of her shots,” Spring-Ford coach Todd Reagan said. “Helena’s an excellent player who had an awesome tournament as well, but Mia really did an awesome job in that one.”

Matriccino defeated State College’s Qianna Guo 6-0, 6-3 in the opening round before downing Penn Manor’s Catherine Rabatin 6-4, 6-2 in the quarterfinals. Council Rock South’s Dasha Chichkina beat Matriccino 6-2, 6-2 in the semifinals before falling to eventual champion Grace Li of Unionville (6-4, 6-2) in the title match.