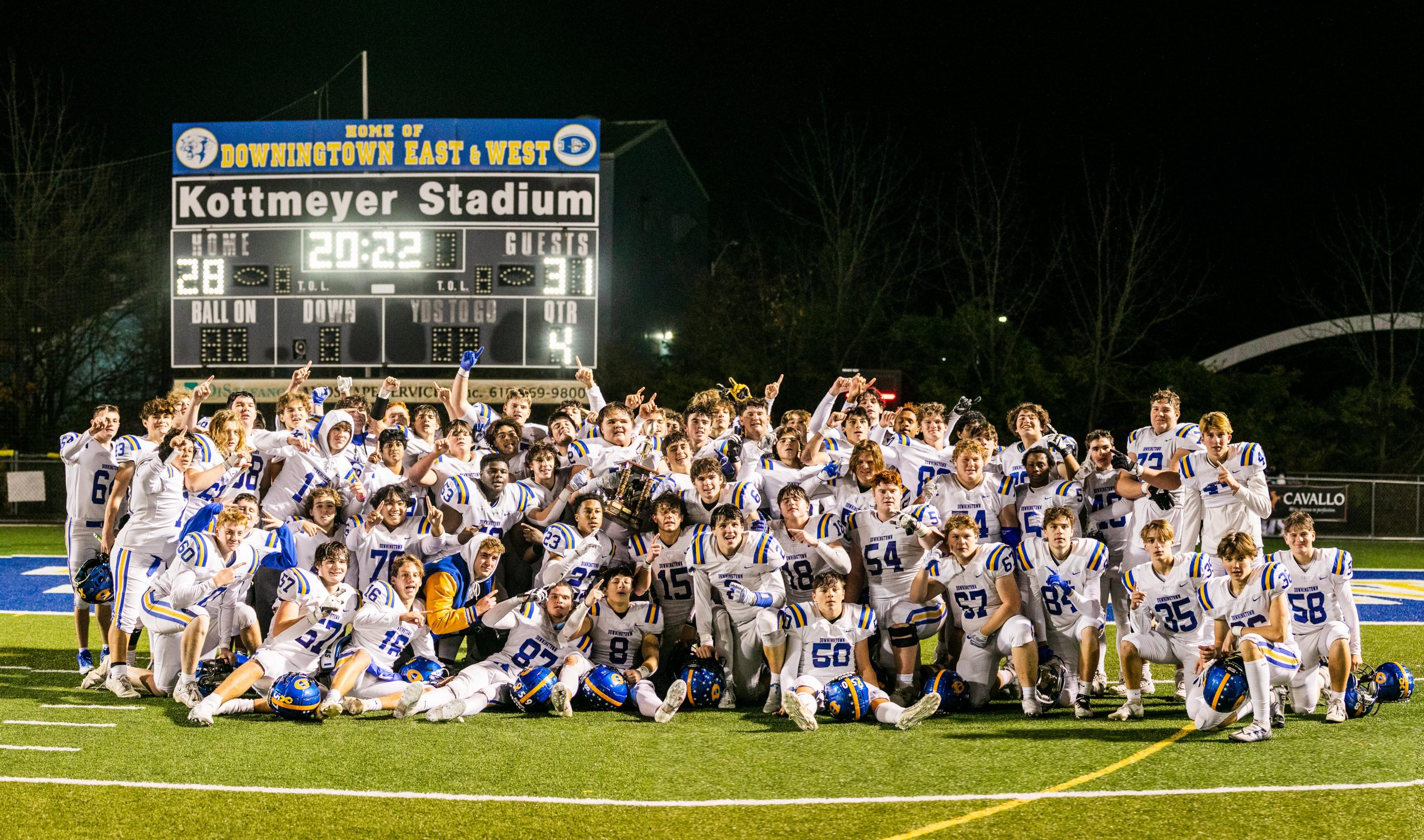 DOWNINGTOWN >> Downingtown West’s Quinn Henicle and Dean Hangey made their Battle of the Brandywine debuts, Friday, but their performances entrenched themselves forever in the lore of the series.

With four minutes remaining, trailing by five to Downingtown East, Henicle dropped back and fired a deep pass down the middle. Hangey raced under it and all the way to the end zone.

The 77-yard touchdown proved to be the game-winner, as the visiting Whippets pulled off a comeback win, 31-28, over the Cougars in the regular season finale.

The win gives West a share of the Ches-Mont National Division title with Coatesville, whom the Whippets didn’t play due to the game getting cancelled over threats of violence.

It was a frantic fourth quarter, as both teams punched and counterpunched. East (2-2 division, 7-3 overall) led 21-7 in the first half and 21-17 going into the final frame.

On the third play of the fourth, following a 74-yard pass from Henicle to Jake Kucera, John Mulville gave West (3-0, 8-1) its first lead with a two-yard TD run. The extra point sailed wide, and East’s Mike Waite returned the ensuing kickoff 45 yards to the West 45.

Nine plays later, East regained the advantage when Jamy Jenkins completely fooled the defense on a read play and rushed in from nine yards out.

West picked up a first down on the next drive, but was forced to punt, which netted minus-two yards after a bad snap.

East had its chance to put the game out of reach, but on a fourth-and-seven from the West 23, Jordan Barry broke up a pass from Jenkins to Caden Walsh to set up Henicle’s heave.

Downingtown West’s Jordan Barry breaks up a pass on a key fourth down. (Nate Heckenberger – For MediaNews Group)

“(West) is good,” East coach Michael Matta said. “We had our chance and didn’t capitalize on it. They got their chance and they did. Credit to them.”

The Cougars had one more opportunity, and on a fourth-and-seven from midfield, Jenkins found Tanner Dilullo down the middle, but Kucera was there to break it up.

Kucera caught 10 passes for 169 yards, which was a record in the Battle of the Brandywine series, until Hangey’s big score gave him 177 on the night. Henicle completed 20 of 25 passes for a series-record 364 passing yards.

“This is unreal,” Henicle said. “I’m speechless. The whole game felt incredible. So many ups and downs. I love this team. It was incredible we were able to pull out the win.”

Jenkins was the quarterback of note in the first half, completing seven of 10 passes for 183 yards including a 57-yard TD to Bo Horvath, to put East up 14. Jenkins finished with 220 passing yards and Horvath tallied 111 rush yards on 34 carries.

With 80 seconds left in the first half, Henicle fired to Hangey down the away sideline. East defender Michael Leo nearly picked it off, but somehow the ball got thru and Hangey made a circus catch for a 58-yard TD to cut the lead to seven, going into the break.

“This is what this team works on, finishing,” Hangey said. “That’s what we did.”

West racked up 498 yards of offense, with 296 of them coming in the second half. While much of West’s attack was horizontal in the first half, Milano had the perfect call down the field when he needed it most.

“It’s a concept we use a lot and (East) was really good at covering it up,” Milano said of the game-winner. “We kind of sat on it the whole game and hit it at the end. We knew we had it in our back pocket if we needed to use it.”

The Whippets will be back in the District 1-6A playoffs for the first time since winning the title in 2019. They will, however, be without Hangey, who must sit out thanks to a PIAA transfer rule. Hangey transferred from Malvern Prep midway through his sophomore year.

“It’s really rough,” Hangey said. “ I love this team. I wish I could play 100 more games with the guys, but that’s not how it worked out.”

The Cougars will continue their season in the postseason, though potentially as a road team.