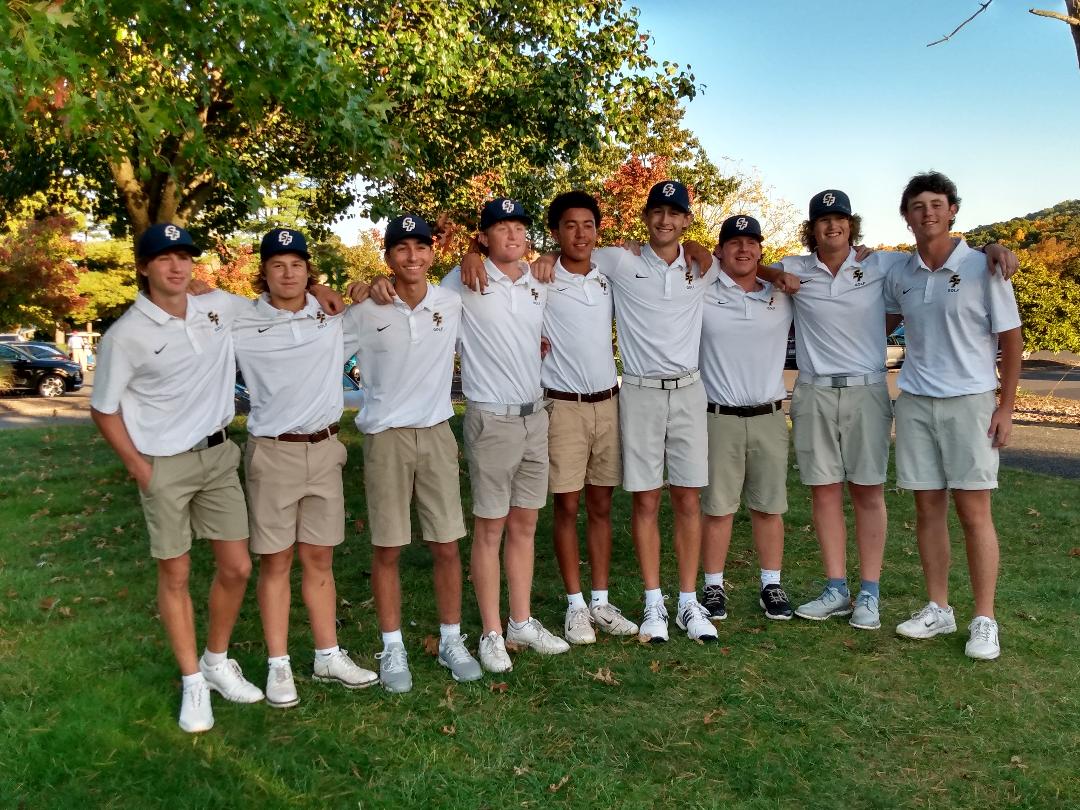 GILBERTSVILLE >> A team in any sport that has depth and skill and is willing to put in extra time to get better is tough to beat. That’s what opponents of the Spring-Ford boys golf team have had to face for many years, and especially the last two.

And those qualities paid off for the Rams again on Friday afternoon as they repeated as Pioneer Athletic Conference team champions with a 182-207 win over Pope John Paul II at Bella Vista Golf Course.

Charlie Ferrise shot a 34 and Luke Fazio a 35 for Spring-Ford on the par-35 first nine holes. Jack Brennan was the low man for the Golden Panthers with a 36.

“We were nine strong,” said Ram first-year coach Jerry Hollingsworth. “We are lucky to have kids who devote the whole summer to golf. Nobody works harder than Spring-Ford.”

Rams Jake Blackmore (37), Chris deHaan (38) and Lucas Kozak (38) weren’t two far behind the leaders, showing that Spring-Ford is anything but a team with just one or two stars.

“We had five seniors,” said Fazio. “All eight of us can shoot under par.”

“We’ve just got that special chemistry,” said Ferrise. “When one person does badly, another steps up. A really solid team this year.”

Another factor in the Rams’ favor is tradition. They have now finished in the top four of the PAC for 12 straight years and 15 of the last 16. This was their fourth championship since the league began its Final Four playoff format in 2005. They have also had seven runner-up finishes.

PJP has been trying to build a similar golf tradition since the school opened in 2010. The Golden Panthers made the playoffs in three straight seasons from 2015-2017, but Friday marked their first appearance in the championship final.

“We finished third and beat Perkiomen Valley in the playoffs,” said Golden Panther assistant coach John Miles. “The senior leadership has been remarkable. They built this program. Senior leadership was great and some of the underclassmen stepped up at the end.”

“We were just getting done what we had to get done,” said Brennan, one of the seniors. “We always just grinded it out. We made our goal of getting to the playoffs and winning one or two.”

Cole Miller and Adam Profrock followed Brennan’s score for PJP with 42’s, Aidan Canning shot a 43 and Patrick McNerney and Ryan McQuarrie tied for the fifth-best score with 44’s.

Spring-Ford was coming off a disappointing showing in the District 1-3A tournament earlier in the week when none of the Rams made it to the second day and they finished second by four strokes in the team competition to Downingtown West, a team they had beaten by 17 strokes in a non-league match during the regular season.

“This was the best way to finish,” said Fazio, who will play at West Chester University next year. “I was 3-under through five. I was making putts. My driving was on. My putting was on.”

“My short game was on point,” said junior Ferrise. “My putting was working. I was just trying to minimize my mistakes.”

Spring-Ford graduated several key players from last year’s team that went undefeated in the PAC. The same will be true of this year’s squad, which also posted a perfect conference record.

“We lost four last year,” said Hollingsworth. “We lose five this year. We’ve got to find a lot of kids to step up.”