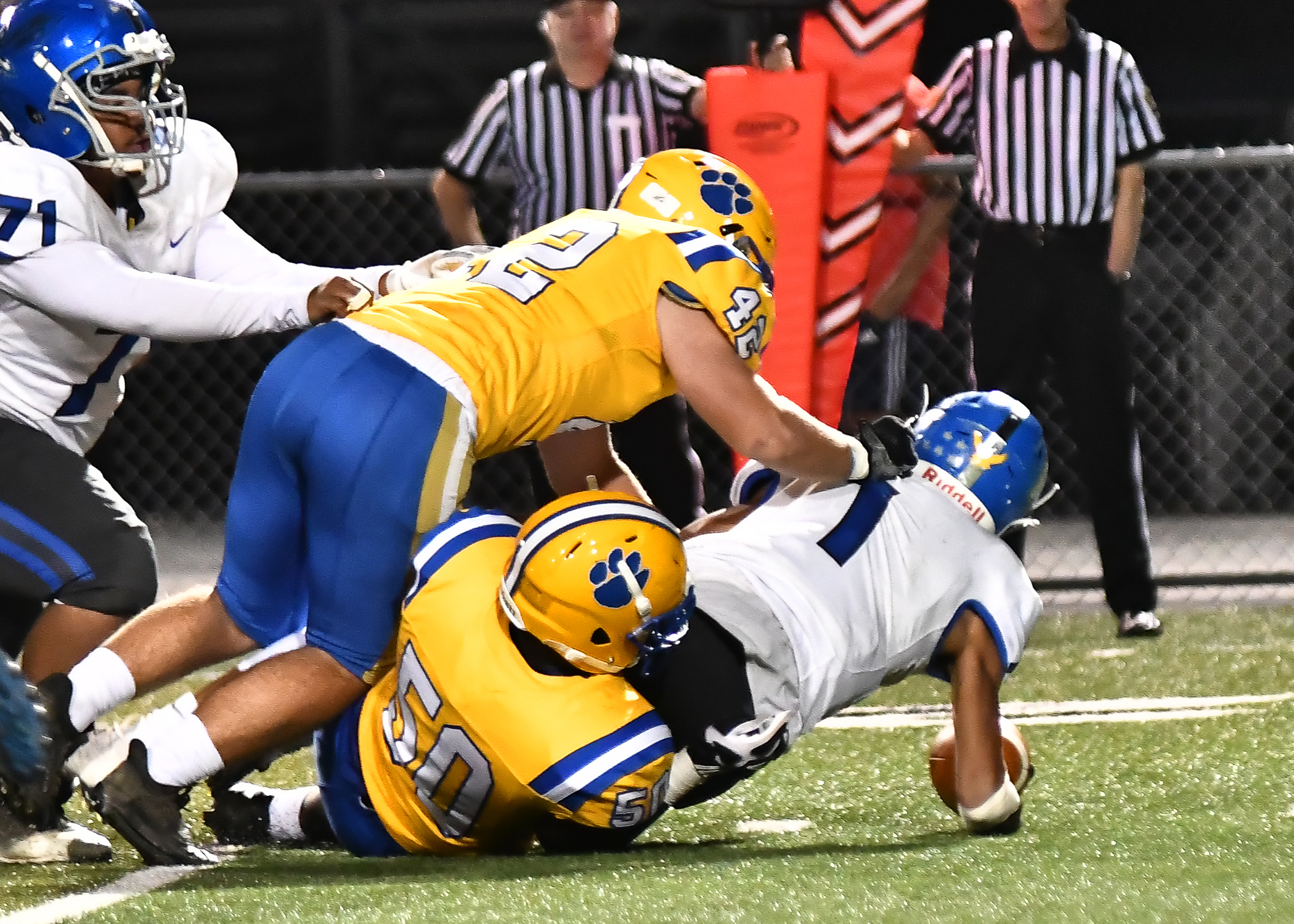 DOWNINGTOWN>>If you were late to Kottmeyer Stadium Friday night, you missed a lot. Both Downingtown East and visiting Academy Park (3-5) scored within the first couple minutes of the game, but after that initial burst by the Knights, it was all East as the Cougars (6-1 overall, 1-0 Ches-Mont) cruised to a 34—6 victory.
“Academy Park is a spunky group—they played tough,” said Cougars’ coach Mike Matta. “Their defense is really good. My hat goes off to them.”
The Cougars got on the board in a hurry, when Mike Waite took the opening kick-off, broke a few tackles, then took it to the house for a 91-yard touchdown.”

“That was a great start to the game, and it was awesome hearing the crowd and everyone yelling behind me,” said Waite. “I knew I was going all the way once I was sure I beat that last guy. I felt him flick my foot, but then I was gone.”
Undaunted, the Knights simply went to work, and put up a score of their own on the ensuing possession. Paced by a balance of runs and passes, the Knights marched 68 yards on just six plays, capped by a 13-yard run from runningback Terrence Oliver.

“We know we are capable of playing like that,” said Knights’ coach Jason Volshek. “When we play the way we know we can, that is the result.”
Oliver led the Knights offensive attack, rushing for 83 yards on 18 carries. Quarterback Darrell Fields chipped in with another 73 yards on 12 carries, and completed 7 of 19 passes for 99 yards.

“We had some positives tonight, but when we go up against a talented team like Downingtown East, we can’t afford to make mistakes,” said Volshek. “We’re not good enough to overcome mistakes, and we made too many. Too many penalties and negative plays.”
The Cougars showed a knack for making the big plays when they needed to on defense. While Academy Park moved the ball well at times, the Cougars came up with the plays to end any serious threat.

“I think our defense overwhelmed them at times,” said Matta. “And our special teams played well. We had the kick-off return, and we kicked two field goals. We’re not a team that kicks a whole lot of field goals.”
In addition to his big return, Waite had an interception.
“They are a pass-first team, so we knew it was important that we have good coverage this week,” said Waite. “Our DBs came out ready to play, and we had a pretty good game.”
On the offensive side of the ball, the Cougars had their usual productive night from workhorse Bo Horvath, who rushed for 146 yards and a pair of touchdowns on 22 carries, and caught three passes for 60 yards.

Setting up those runs from Horvath was an efficient passing game. Quarterback Jamie Jenkins completed 11 of 19 passes for 140 yards, and connected with six different receivers.

“The first half was really good,” said Jenkins. “But we still have a lot to work on, especially in the red zone. We left a lot of points off the board. We came out fired up after that kick-off return from Mike, so we wanted to make sure we put together a great drive on our first possession.”

Shine runs for 287 yards and 4 TDs, Central Bucks East earns 1st win over North Penn since 2001
Phoenixville comes up with the goods late to beat Pottsgrove for first time in 17 seasons