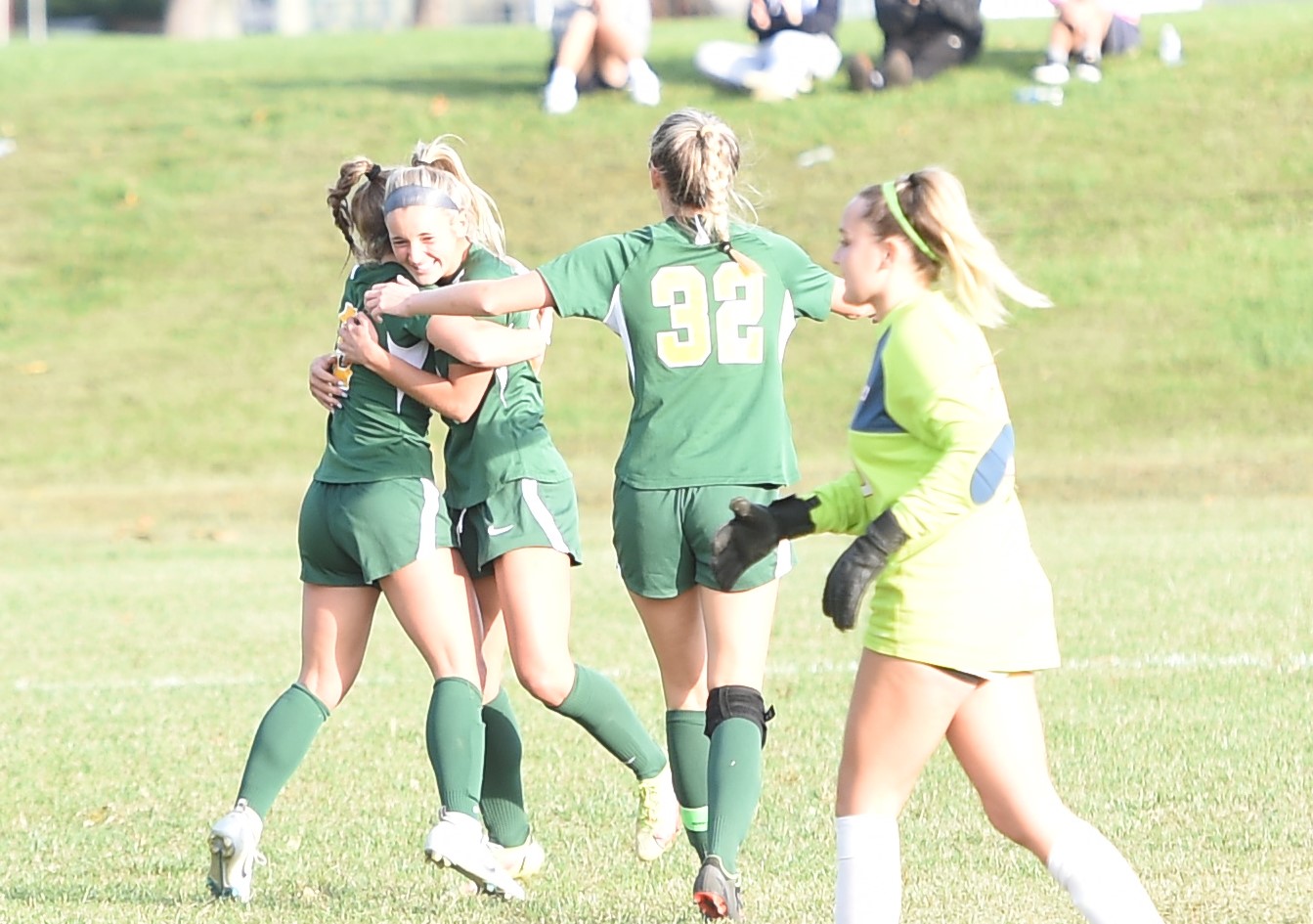 Lansdale Catholic's Caitlyn Moore (12) is congratuled by Megan Steinbach (5) and Emily Simpson (32) after Moore's goal in the first half against Archbishop Ryan on Thursday, Sept. 29, 2022. (Mike Cabrey/MediaNews Group)

LANSDALE >>  Scoring a goal in Lansdale Catholic girls soccer’s game against Archbishop Ryan Thursday afternoon was something that was definitely going to make Carolyn Moore’s birthday even sweeter.

And just before halftime, Moore provided the opening tally in the Philadelphia Catholic League matchup, getting a touch on the ball ahead of the out-coming goalkeeper and rolling it into the net.

“Our coach told us that our goal really was run through the balls and I had the opportunity,” Moore said. “I booked it, I ran through and lucky, I got it in.”

The Crusaders kept the momentum going after the break, scoring twice early in the second half before Moore added to her birthday celebration by collecting a second goal on a free kick as LC pulled away for a 4-0 victory over the Ragdolls.

Lansdale Catholic’s Ava Mercier (8) gets a huge from Casey Sabolsky (33) while Emily teammate Simpson (32) shows her excitement after Mercier’s goal in the second half against Archbishop Ryan on Thursday, Sept. 29, 2022. (Mike Cabrey/MediaNews Group)

“We had some speed in the beginning and then the second we got a goal we picked it up,” Moore said. “And then it was just goal after goal. And then it just got even better.”

Emily Simpson assisted on Moore’s first goal then scored her own to double the Crusaders’ advantage. Ave Mercier followed shortly after, striking on a corner as LC (6-2-0, 4-0-0 PCL) kept pace with Archbishop Wood as the only sides still undefeated in Catholic League play.

“When we went out for halftime we were like full throttle, not letting up,” Simpson said. “We were like we have to come out quickly and come out strongly and that’s exactly what we did. So we had a great start to that second half and played it out really well.”

Lansdale Catholic came into Thursday having dropped two of their last three – falling to George School 3-2 last Tuesday then starting this week losing to Springfield-Delco 1-0 Tuesday. The Crusaders have another nonleague contest Saturday hosting Wissahickon at 11 a.m. then cap next week’s three-game slate at home against Wood Thursday.

GIRLS #SOCCER: @LCCrusaders 4, Archbishop Ryan 0. Carolyn Moore scores her 2nd goal on her birthday, Molly Norbury getting a touch on Bella Wack’s free kick and Moore running on it & sliding it into the far left corner. pic.twitter.com/TrfdTUviWB

“I feel like we definitely learned from those two losses,” Mercier said. “I’m glad they were not PCL games so we could learn from them and just get better and push harder for when the next game’s coming.”

Lansdale Catholic improved offensive efforts throughout the first half but appeared it was going to have to settle for still being 0-0 at intermission with the Ragdolls until Simpson sent a ball into the box. Moore charged it to get a piece of ball, enough to get it by the keeper at the top of the box with Moore then walking the ball into the goal.

“What we said we just had to run through the ball and that’s exactly what she did,” said Simpson of Moore. “She was just, got there first, was tougher out there and she just ran through. And I don’t even know if it hit off her leg or whatever but it was great.”

While the Crusaders grabbed the lead late in the opening 40 minutes, Simpson said LC knew it could not sit back and needed to apply more pressure coming out of intermission.

Megan Steinbach set up LC’s second goal, the University of Rhode Island commit delivering a ball to the front of net for Simpson, who put a shot off the crossbar and in for a 2-0 lead.

“She crossed it and then I had the near-post run and I kind of was just able to kick it around the goalie,” Simpson said.

Lansdale Catholic’s Caitlyn Moore (12) gets a touch on the ball in front of Archbishop Ryan goalkeeper Alana Verello (30) on to way to scoring in the first half of their game on Thursday, Sept. 29, 2022. (Mike Cabrey/MediaNews Group)

Mercier extended the margin to three after a Crusaders corner kick, the ball falling into a crowd where she unleashed a shot that eluded the keeper’s dive and went inside the left post.

“We changed up how we did our corners,” Mercier said. “And we all came out of the goal line and Casey (Sabolsky) got a head on it and then I just saw it coming and I took a touch and I shot it into goal.”

Moore finished her brace on another Lansdale Catholic restart. Bella Wack sent a free kick into the box where Molly Norbury knocked it down with Moore collecting it and slotting a shot into the far left corner to make it 4-0.

“I got into space and it was wide open for me,” Moore said.