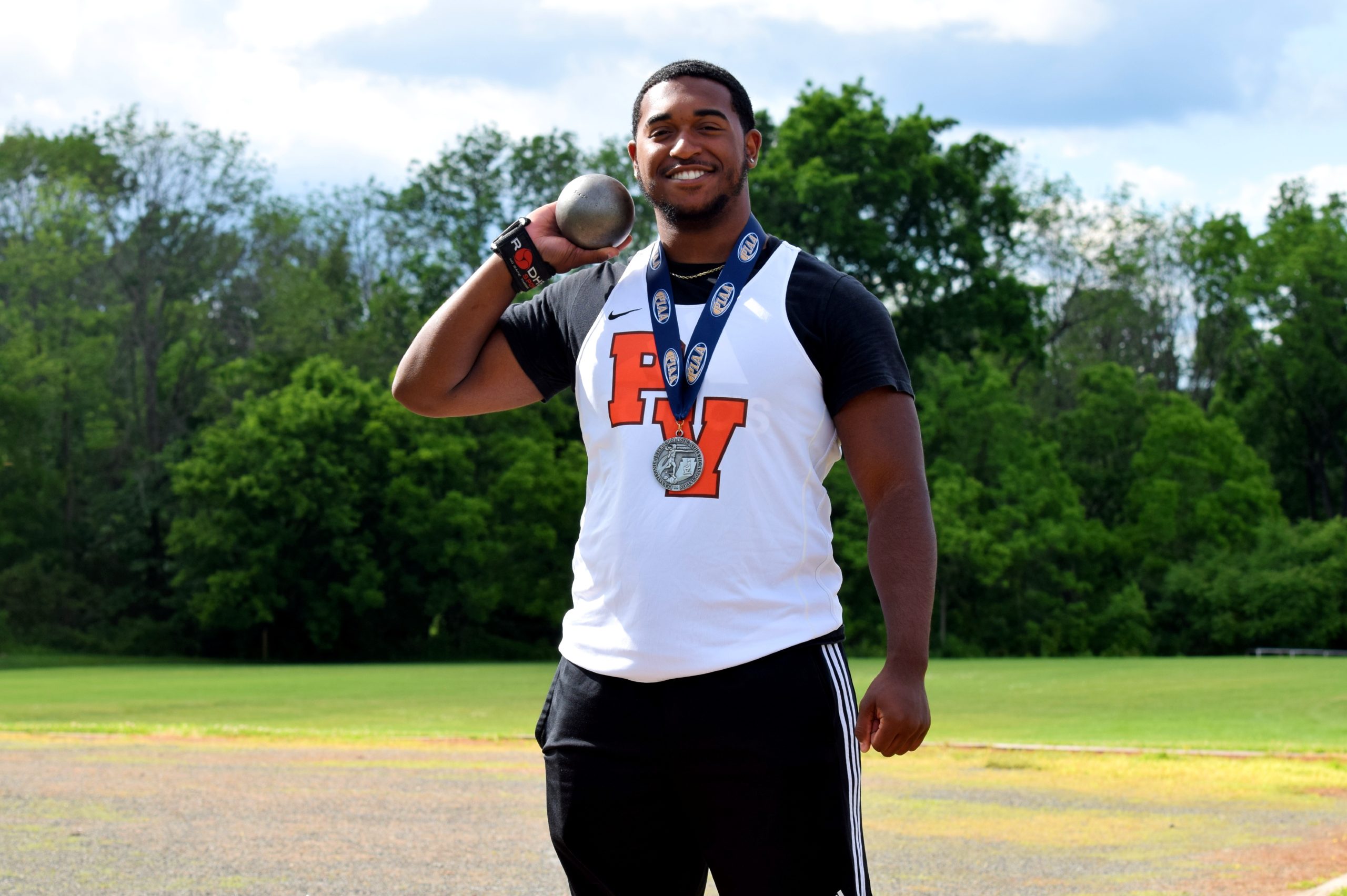 Many athlete of the year stories tell a tale of a coach knowing their incoming student-athlete was destined for greatness from first sight.

This is not one of those stories.

Back in 2019, Ronde Washington joined the Perkiomen Valley track and field team as just a face in the crowd.

“The thing about Ronde for me is, he was the freshman that came in who didn’t stand out from the crowd,” said Perk Valley head coach Joe Petsko.

“But he fell in love with the sport and took it upon himself to become the embodiment of putting the work in, setting goals and reaching them. You always hear the stories about the great ones doing it all when you’re not looking and he’s the embodiment of that.”

Fast forward to 2022 and Washington is still a face in the crowd … or more appropriately a face above the crowd, from the perch of the podiums he ascended through the spring track and field season.

Washington lent his throwing ability to the Vikings in the shot put and discus this spring but made the greatest name for himself with the 12-pound ball in his right hand.

The podium finishes included golden placements in the shot put at the Great Valley and Unionville invitationals, the Pioneer Athletic Conference Championships – after throwing a personal-, school-, and meet-record 60-6 – and the District 1 Class 3A Championships before concluding his high school career with a silver medal at the PIAA Championships.

Washington added a PAC championship in the discus and 7th-place finish at districts to his season’s trophy cabinet, which also includes the honor of Mercury All-Area Boys Track and Field Athlete of the Year.

Athletic excellence is in the Washington family DNA.

“In my family, sports have always been a big value,” Ronde said. “My brother, he was an MVP football player, and my dad was also a very good football player; he actually spent some time with the Ravens. I wanted to achieve athletic greatness myself.”

It’s a remarkable rise from unnoticed rookie to the results he achieved this spring. Maybe most impactful is that Washington, even as a junior, was not a premier name. A year ago he was ninth in District 1 throwing in the high 40s and did not qualify for states.

“Coming in freshman season I wasn’t really good, under 25 feet,” Washington said. “But I saw Jason Wagner, he was our top shot-putter when I was a freshman and he was a senior, and he threw 58 feet. I said then and there, ‘I want to be like him.’ That’s when I started training.”

Wagner moved on to compete at Wake Forest University after winning the 2019 PAC and District 1 championships in the shot put. Back at Perk Valley, he left a mark – a school-record 58-6 – and a spark … in Washington.

“I could tell the fire was there his sophomore year,” said Petsko. “From freshman year, he threw and lifted weights and trained and did some competitions through the summer and fall, pretty much dedicating himself to the craft. That’s a testament to how he got there.

“Freshman year he went from 25 feet to 36 feet, then had the COVID shutdown year and came back as a junior and threw 50 for the first time. He kept building from there and got to 60 feet this year.”

Washington crossed the 60-foot threshold at the PAC Championships at Norristown on May 14, the first league championship meet since 2019 … the meet where Wagner laid down his marker.

Washington was close on his second attempt (58-2). But on his sixth and final attempt of the meet, a heave of 60-6 surpassed Wagner’s PV record and Methacton graduate Wesley Lavong’s 2009 record of 59-5.

“I still feel a sense of shock. Going into the meet I had no idea what the meet record was. I wasn’t focused on that, I just wanted to break my school record and get over 60,” Washington said.

“After I broke 60 and found out I was in the lead with the school record, one of my coaches walked up and said I broke the meet record. I never set out to do that but it’s a great feeling now that I did.”

Wagner didn’t require a text or phone call to learn the fate of his record. He was on hand as a spectator.

Commitment to the cerebral side of throwing allowed for his athletic achievement.

“He’s really analytical about (throwing),” said Petsko, the 16th-year PV coach who was a thrower at Ursinus in college. “He’s one of the top kids I’ve ever had who understands that throwing is about your positions more than anything else.

“There are kids that are stronger than Ronde, but he really understands the technique side of it and has such solid body mindfulness, probably the best I’ve had in being aware of what he’s doing with his body, his foot, his hip, everything that goes into a throw. The cerebral side really set him apart.”

Another part of Washington’s head game improving was letting go of pressure.

He committed in February to compete at Monmouth University beginning in the fall. Securing his college future was a seminal moment.

“My turning point was when I committed to my college. I realized there was no more stress of ‘Am I going to be good enough to go somewhere?’ I already secured my spot. From now on it’s just having fun with it.

“My brother was talking to me, ‘Now you’re a D1 athlete. You’re top tier.’ It made me realize I really achieved the goals I have from a young age. From then on I became more relaxed. Pushing myself became easier. I wanted to keep progressing for my current team and future team.”

The results were immediate.

“The Meet of Champions in the indoor season (Feb. 19 at Lehigh University) was really his breakout where he got away from the crowd,” Petsko said. “He was throwing 51, 50, around there all winter, and then he went to Meet of Champions and had a four-foot PR (56-5 ¼) which was incredible for someone his level to jump up that far.

“The next week was indoor states and he threw pretty much the same and got second and I think that’s really where he grew up to the next level and carried that through the spring season.”

It wasn’t all smooth sailing. Washington endured a wrist injury early in the outdoor season that cost him a few weeks and was a lingering issue the entire season.

“I had to take my recovery seriously, as seriously as my workouts,” he said. “Being honest with you, there was never a point where I felt 100 percent back to being myself. It’s something that still kind of bothers me, but I’m just taking my time off to let it fully heal.”

He still managed to bring his best in the postseason, first with his record-setting PAC meet, followed by a District 1 championship medal after throwing 58-2.

His finale, a second-place finish (57-0) in the PIAA Championships at Shippensburg University on May 28, completed a rise that wasn’t entirely rapid but a case study in incremental gains made through commitment and effort.

The next goal-setting face in the crowd probably took notice.

“I’m still really happy about (my season),” said Washington. “Coming from last year and not being on the podium at all, to be on the podium as district champion, state runner-up, I honestly feel really good about it.

“I’m a firm believer that what’s in the past is in the past. Now I have to build on it in the future.”