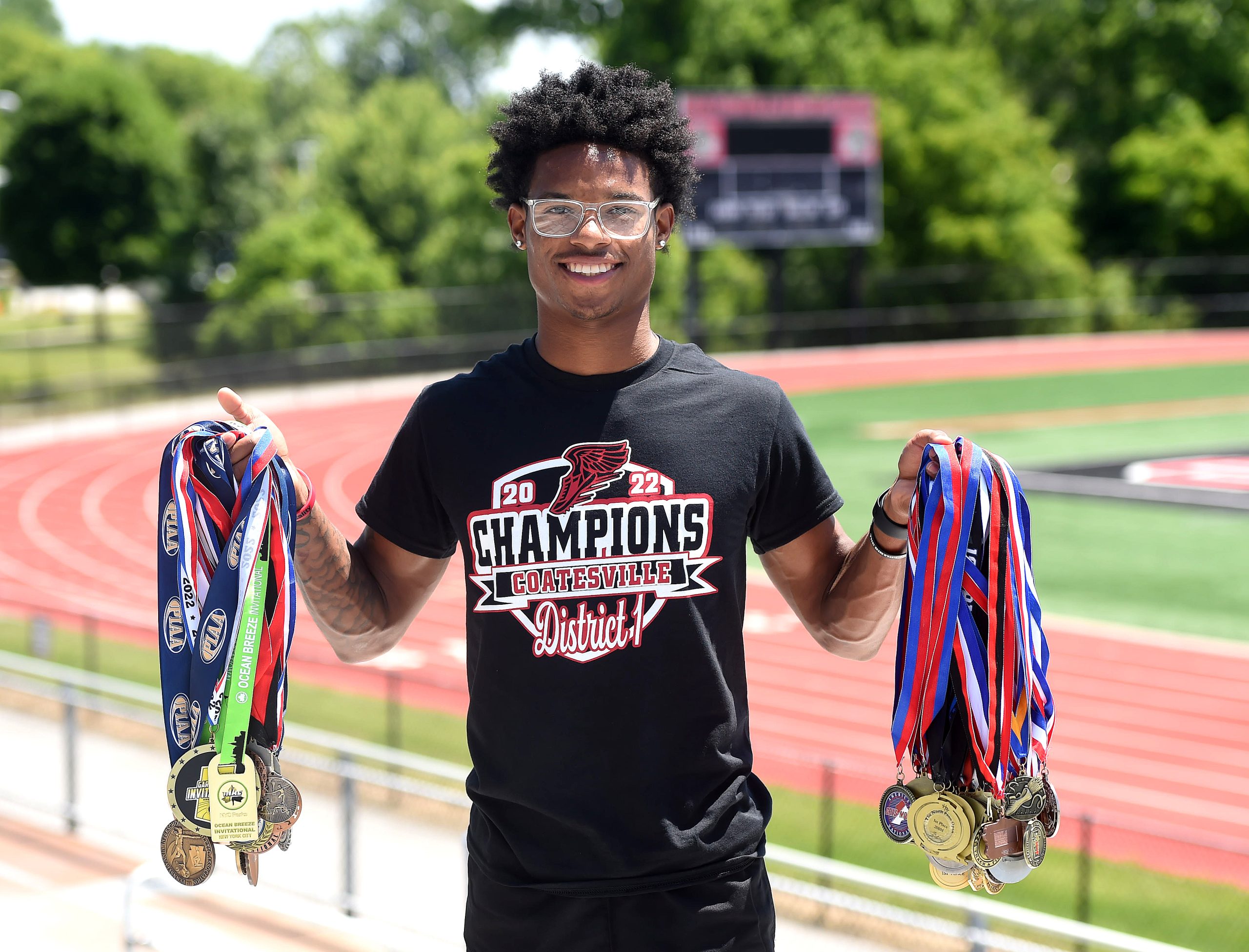 Coatesville High School’s Lebron Bessick, the 2022 Daily Local News Boys Track Athlete of the Year, found his special niche on the track in the recent PIAA post-season -– and the rewards were big-time.
Coming into Districts, Bessick was the Ches-Mont champion in the 100-meter dash, the 200-meter dash, the 4×100 relay and the 4×400 relay. But Coatesville boys track head coach Damien Henry suggested that Bessick turn his running talents in a different direction.
“My coach and I had long talks almost every day for weeks, and he would tell me how he thought I could possibly be a 45-46 guy in the 400, which would open up a lot of doors for me big time,” said Bessick.

At the PIAA 3A state track championships at Shippensburg University, Bessick finished first in the boys 400-meter run, clocking a school-record 46.91, a time ranked first in Pennsylvania and among the top 25 times in the USA. He also earned NFHS honor roll status.
Bessick also anchored the gold-medal winning Coatesville boys 4×400 relay at the PIAA 3A track & field championships, which included senior Dave Kelly and sophomores Jabari Stocker and Tommy Silvester. They clocked a school-record 3:16.13, edging runnerup Central Bucks West (3:16.38) with a great final burst by Bessick.
Henry said, “When Lebron took the baton, he was about 15 meters back and ran a split of 45.85 to win the race.”

Bessick remembers a special pep talk given to him at Shippensburg before the 4×400 relay.
“All I can remember was about 20-25 minutes before the race, my coach called me over to the gate while I was getting ready and said, ‘Let’s go, this is it, when you get the baton you know what to do. Show them what you can do and run this dang 45 (seconds) -– come on!’ After that I turned into a different person and didn’t leave anything on the track.”
Henry said, “Lebron has a special talent in the 400, and he executed it to perfection for the entire weekend.”
Thanks to his excellence in the 400 (and other races), Bessick will be taking his running talents to the University of Houston, where he will matriculate this fall.
“Lebron has not scratched the surface of his potential,” said Henry. “He understands how to execute a race plan and has a special combination of strength and speed. He was focused this season and it led to him ending his career a two-time state champion.”
On that memorable final day at the PIAA 3A state championships at Shippensburg, Bessick’s favorite memory occurred at breakfast with his Red Raider running mates.
“My teammates kept telling me I was going to run 46 (in the 400) and then split 45 (in the 4×400) and win it at the same time,” said Bessick. “Well, guess what, I ended up doing it and it was the best feeling ever!”
At Districts, Bessick finished first in the 400 meter dash with a then-PR of 47.47 with a strong closing spurt to pull ahead of Pennridge senior Joey Gant down the stretch.
As a junior at States, Bessick finished third in both the 200 meter and the 4×100 relay, and placed sixth in the 4×400. Earlier that season, he was runnerup in Districts in the 200, and helped the Red Raiders finish first in the 4×100; and at the Ches-Mont Championships he won three gold medals (100, 200, 4×100 relay).
Bessick first became interested in running track as a seventh grader, thanks to one of his closest friends, Tommy Ortega.
“I wouldn’t be running track if it wasn’t for Tommy,” said Bessick. “He’s the one who wanted me to do it in 7th grade -– ever since then, I’ve been dedicated to the track life.”
Bessick credits much of his success to Henry and assistant track coach Eric Schuck, who arrived at Coatesville this spring.
“These two guys taught me so many things, to the point that I can’t even remember them all,” said Bessick, with a laugh.
At the University of Houston, Bessick plans to major in sports management.
Henry said, “I believe now that he is committed to track and field. There are no limits to his success in the future at the University of Houston.”

Fun facts – Lebron Bessick
Favorite book: Diary of a Wimpy Kid.
Favorite author: Mike Lupica.
Favorite TV show: Spongebob.
Favorite movie: Scream.
Favorite athlete: Lamar Jackson.
Favorite pre-race pump-up song: NBA Youngboy – Achievements.
Favorite team: Baltimore Ravens, Los Angeles Lakers.
Favorite place to visit: “The gym.”
Favorite pre-race meal: “Uncrustables and what my coach calls ‘speed balls’ – they are like frozen granola bars.”
Favorite running shoe: “I like to wear the Nike Zoom Superfly Elite 2’s because of how light and comfortable they are.”
Pre-race preparation: “It’s the same every time. I get rest the day before, come to the meet locked in with headphones on, do whatever my coach tells me and make sure I stay loose.”
Person I most admire, and why: “My mother! She has always put me first and herself last. She makes sure I’m fine 24/7.”
Family members: mother Angelique Torres, father Duane Bessick, stepfather Joseph Perry, sister Armani Bessick, sister Cierra Torres, brother Duane Bessick.