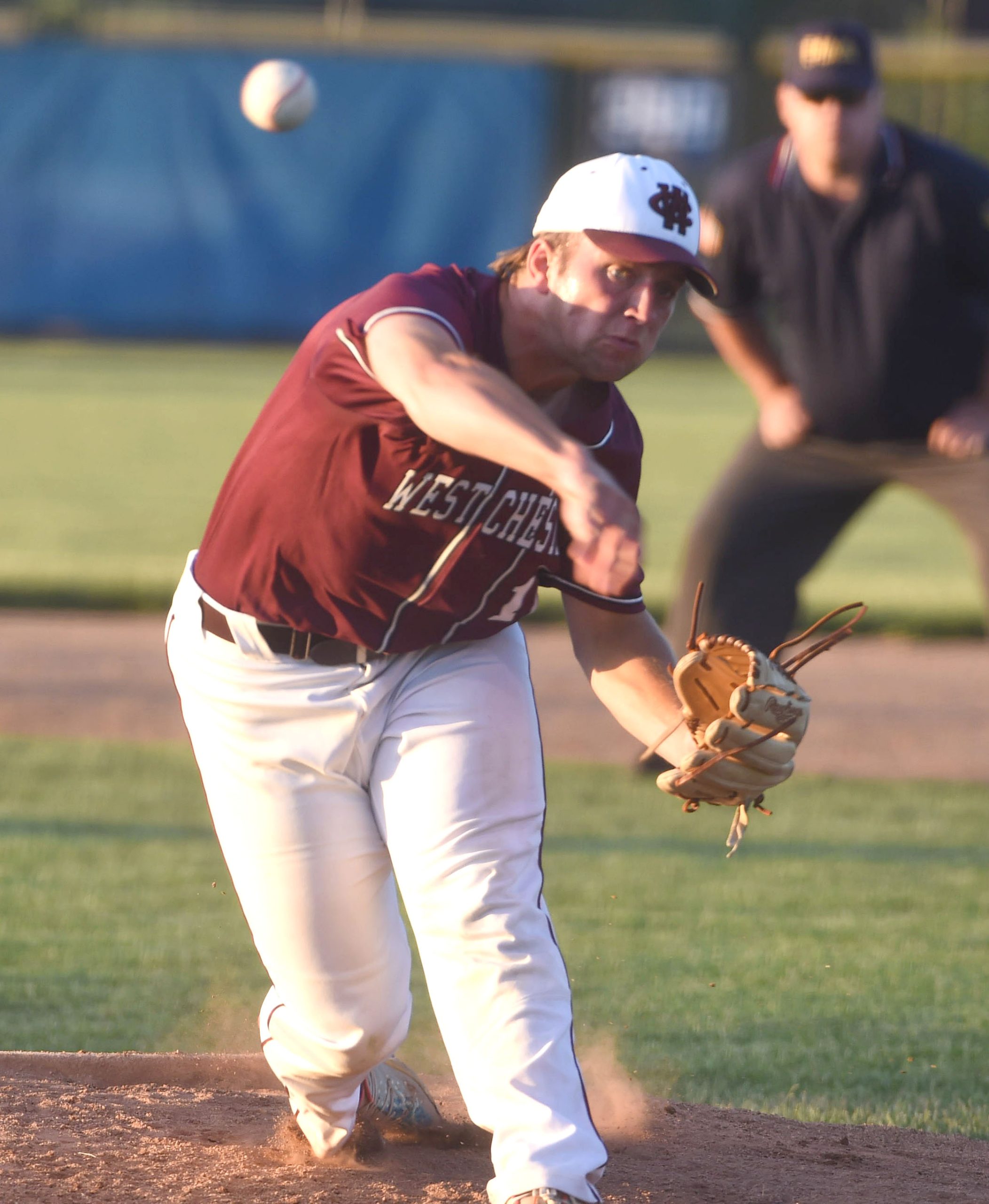 Cumberland Valley (19-6) scored a run in the top of the first inning when leadoff man Logan Suave was hit by a Jackson Snyder pitch and advanced all the way to third base on two passed balls. Suave scored on a Jason Hedrak sacrifice fly for a 1-0 lead and that would be all Barrow-Somers would need.

“It was huge for us to get that run in the top half of the inning,” Suave said. “Last game we fell behind three runs and I told the team to get out in the visitor’s half of the first inning and we did that. And Aidan pitched a great game. His changeup was awesome and he lived on the outside corner. He really picked us up tonight.”

The Warriors (23-3) stranded runners in the second, third and fourth innings against the crafty lefty and the Eagles made it 2-0 in the top of the fourth inning. With two out, Snyder walked Kyle McKeon. Brady Hawkins then lofted a fly ball to right field that Zach Klein had trouble with, due to a blinding sun, and McKeon scored.

Eddie Smink came in to pitch for West Chester Henderson in the top the fifth inning and the Eagles scratched together another run. Smink mowed down the first two Cumberland Valley hitters and then walked Suave.

Suave took off for second and stole the base, and went to third when Ethan Ginagiliuo’s throw to second went into center field. Madrak then ripped an RBI single and the Eagles had a 3-0 lead.

“Henderson had two really good pitchers and they are a very good team,” Cumberland Valley coach Levi Mumma said. “We scratched together a couple of runs and that is what a player like Logan can do. He is probably the best player to come through this program. He set the tone with his legs for us in that first inning. We had a great day of practice yesterday and the kids executed very well tonight.”

Barrow-Somers sailed through the fifth and sixth innings as he set down the Warriors in order in both of those innings. Meanwhile, the Eagles scored another run on two hits in the top of the sixth inning for a 4-0 advantage.

But Barrow-Somers walked Dylan Grim to lead off the bottom of the seventh inning and Mumma went to his bullpen for Nate Miller to close out the Warriors. Miller looked strong as he struck out Giangiliuo and retired Brett McCartney on a pop up for two quick outs.

But Miller then walked Nick Cugino and Zach Klein to load the bases and bring the tying run to the plate in Kevin Wheeler. But Miller finished the deal as he got Wheeler to ground out to third and the Warriors dream of a PIAA title was vanquished.

“Aidan did a great job for us tonight,’ Mumma said. “He was cut his freshman year and he came back and worked so hard to make this team.When we give him the baseball the whole team is with him. He is such a hard worker and he set the tone for us tonight.”

The loss was bitter for the Warriors and West Chester Henderson coach Luke McNichol talked about the loss and all this group has accomplished.

“We made some mistakes but they capitalized on them so give them credit,” McNichol said. “A lot of teams may not have come through like they did. Levi does a great job and the lefty was very good. But, this group accomplished so much.

“We won back to back Ches-Mont championships for the first time in a long while and we are in the big school side of the league and the league is like going through a gauntlet. I am very proud of them.”