North Penn breaks out in 7th, rallies past Spring-Ford 5-2 in District 1-6A semifinal 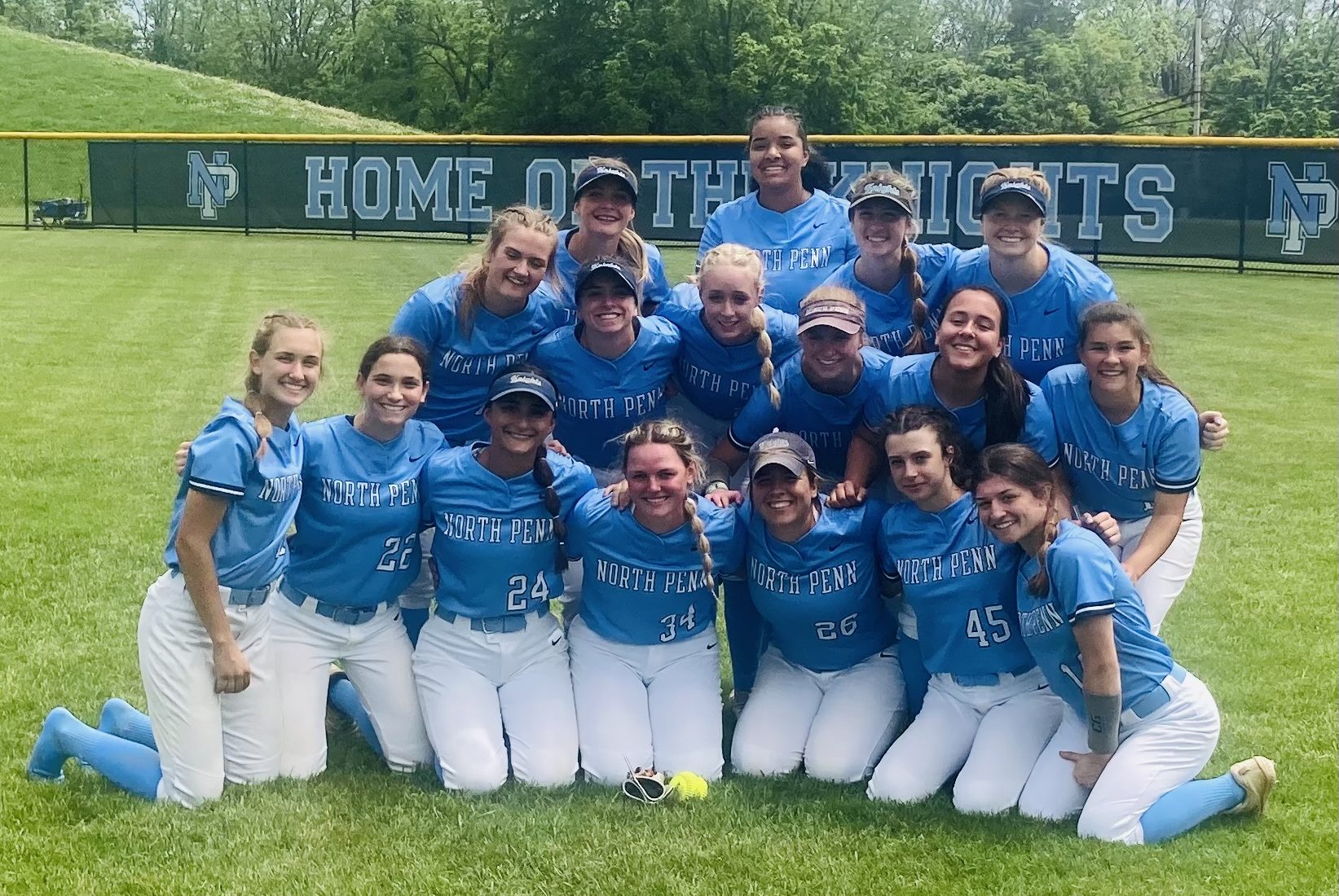 The North Penn softball, pictured after a district playoff win against Great Valley, rallied past Spring-Ford for a 5-2 win in the semifinals Tuesday. (Kev Hunter - file)

UPPER PROVIDENCE >> It was an outcome the likes of which Spring-Ford hadn’t experienced all spring.

The Rams found themselves two outs removed from a return trip to the District 1 Class 6A championship game Tuesday, and playing for a second straight title. They held North Penn at bay for more than six innings in their semifinal, making a two-run lead hold up through several rallies by their third-seeded guests.

Then the roof, and the floor, caved in on them. The Knights erupted for five runs in what would become a bataround marked by four hits, a hit batter and two errors, then shut down their hosts in the bottom half of the frame for a 5-2 victory and the championship-game berth.

North Penn winning pitcher Julia Shearer locked in a pitchers’ duel with Spring-Ford’s Jules Scogna through the first six innings. She racked up 12 strikeouts and yielded no walks while limiting the Rams to four hits and a pair of unearned runs in the third, becoming the primary beneficiary of her teammates’ seventh-inning outburst.

North Penn, the state’s defending 6A champion, will now face top seed Pennsbury in Thursday’s title game at Spring-Ford. As it turns out, the Knights’ comeback scenario Tuesday isn’t that much of a unique situation.

“The kids have been doing it all year,” head coach Rick Torresani said. “For some reason, they’re not going to be denied. They came back and never gave up.”

Spring-Ford (20-2), already assured a seventh straight state-playoff berth by Friday’s overtime win over Quakertown, seeks to claim the highest state seed possible from Thursday’s third-place game with Haverford, a 2-0 loser to Pennsbury in Tuesday’s other semi. Its challenge will be to put behind the late-inning problems with North Penn and get back on the winning track.

“We’ve been on the good end of games like that,” head coach Tim Hughes said. “They started rolling, a couple hits fell in and they (Knights) think they’re in control.”

Spring-Ford was in the ascendancy through the first six innings, especially after gaining a 2-0 lead in the third inning. Pitcher Scogna racked up 10 of her 11 strikeouts in that span, working a no-hitter through five. The senior hurler worked out of bases-full jams in the fourth and sixth; the first by recording a strikeout, the second with second-baseman Madison Peck making an unassisted double play and forcing Gianna Cimino at second base off Sophia Collins’ fielder’s choice hit.

The Rams’ initial lead came in the third courtesy of Gracie Carlin’s booming bat. The third baseman doubled to right-center field to score Ellie Jarrell (single) and Riley Gancasz, who reached first despite striking out when NP catcher Sarah Sobocsik dropped the third strike and delayed in relaying to first.

Spring-Ford, getting just four hits on the day, managed just one more when Peck hit a one-out single in the seventh.

“We need to hit the ball better, to get more support,” Hughes said.

That notwithstanding, Scogna produced another win-worthy effort on the mound. She took a no-hitter one out into the sixth, at which time Brie Wilmot and Cimino had back-to-back singles following Sabocsik getting hit by a pitch to start the at-bat.

She was ultimately replaced by Jessica Fliszar with two out in the seventh. Fliszar put Collins on base by being hit, then ended the inning with Maddie Gronback flying out to center.

The Knights’ seventh-inning outburst started off with a Gronback single and Reyna Doherty reaching base on an error. Shearer singled Gronback home and Sabocsik bunted her way on base, then Doherty and Shearer scored off Annabelle Smink’s fielders-choice hit to give NP a 3-2 lead.

Cimino then hit a two-out single that plated Sabocsik and Brie Wilmot.

“The last two games,” Torresani noted, “we scored in the sixth to win. Everybody came through.”

In addition to their state title last year, the Knights have a number of high-level playoff experiences over the past decade. They played for the district title in 2019, losing to Downingtown West 3-2, and were district champions in 2012.

“We’re going to go on what we did last year,” Torresani said. “I’m just glad this wasn’t a last game for either team.”

With the championship and third-place games both slated for Spring-Ford, starting times have yet to be established. Home-field advantage will be a plus for Spring-Ford, which blanked Neshaminy 5-0 for the 2021 district title.

“It’s tough to bring them back, girls who are freshmen, sophomores and juniors,” Hughes said. “I have to make sure they’re better prepared.”

NOTES >> Scogna’s early pitching line saw her hit two batters and walk two. She struck out the side in the fifth and got all three outs in the first off whiffs. … Shearer fanned the side in the fourth. … It was noted Immaculata and West Chester universities were looked at as venues for the district championship game, but neither one got the nod.