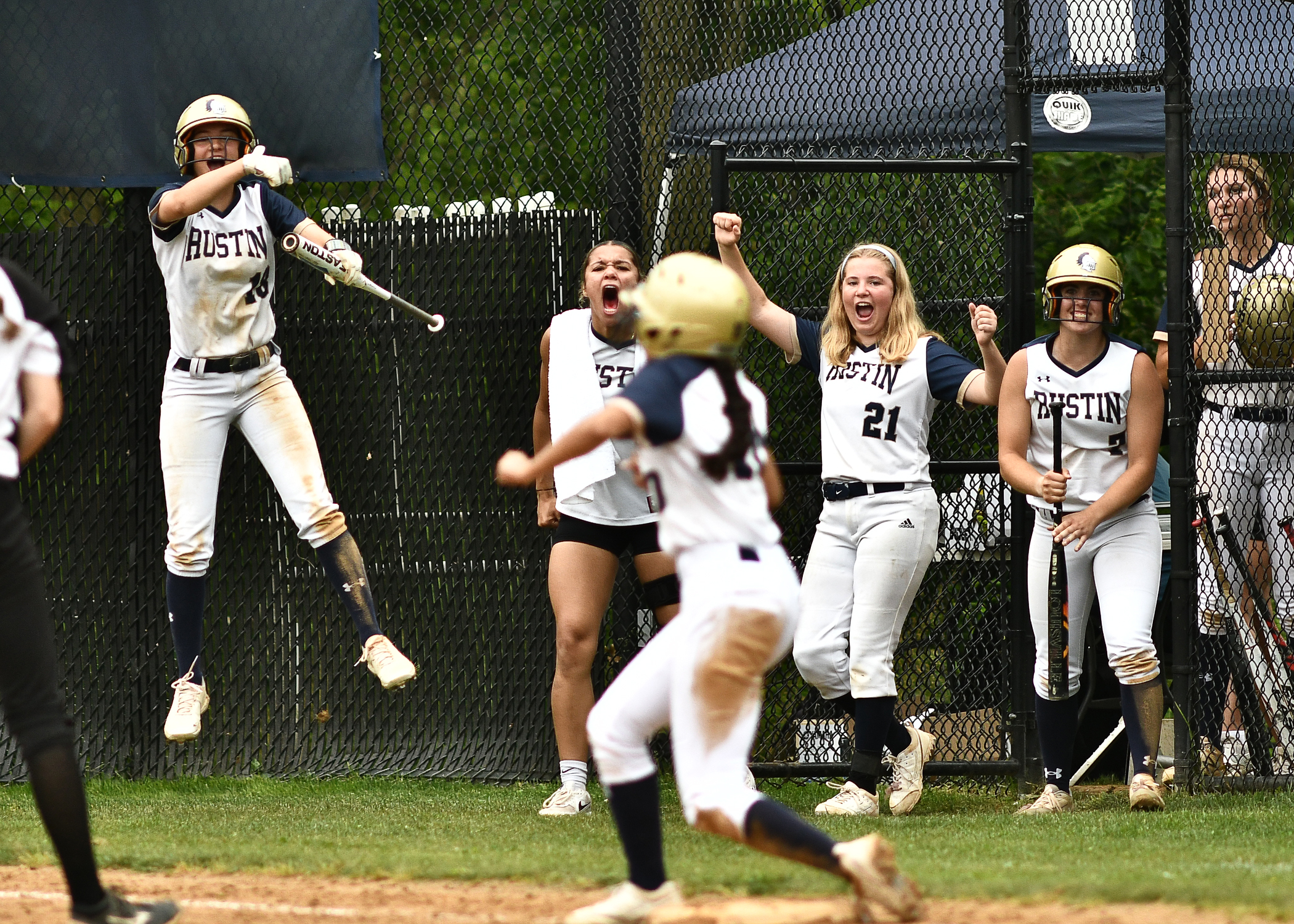 WESTTOWN >> West Chester Rustin struck early and often to earn a spot in the District 1 5A softball championship game with a convincing 11-2 victory over fifth-seeded Marple Newtown (15-8) in Friday’s semi-final round tilt.

The top-seeded Golden Knights (20-2) will face the winner of Saturday’s rain-delayed game between Oxford and Upper Perkiomen, Tuesday at a neutral site to be determined .
“I want to take my hat off to Marple Newtown. They’re a great team that plays the right way,” said Rustin coach Dennis Becker. “I didn’t even talk to the girls beforehand about us being able to play for third place to get to states even if we lost.  We just tried to focus on the game at hand, and battle every game like it’s our last. And if we play the way we did today, I have total confidence in this team no matter who we play.”
The Golden Knights banged out 15 hits on the afternoon, with four going for extra bases, including a pair of home runs. Rustin got at least one hit from eight of the nine slots in the batting order, including a two-hit performance from the number nine hitter, Gianna Lupo (2-4, 3B, 2R).  The Knights scored in all but the second inning.

“This team is really special,” said Rustin’s Paige Bentley. “We have a bunch of us who have played together a long time.  There are no holes in this lineup.  Everyone can make the big play or come up with the big hit.  Up and down the entire order, we can all put the bat on the ball, and hit for power if we need it.”
Even in the stacked lineup, Bentley stood out Friday. The third baseman was a perfect 4-for-4, with a home run, a double, two runs scored, and three runs batted in.

“Paige had an amazing game,” said Becker. “She’s just been working, working, working to get better all the time. She’s just a great kid and a great player.  She beats herself up when she doesn’t hit, so it’s always nice to see all that work in the cage pay off for her.”
In addition to Lupo and Bentley, three other Knights posted two-hit games — Gina DelGiorno, Kelly Fricker and Taylor Kuhn — while Mairead Hopkins chipped in with a two-run homer.
Rustin went to work right from the start, platting three first-inning runs. DelGiorno led off with an infield single, moving to second on an overthrow. Kelly Fricker reached on a fielder’s choice as the Marple infield opted to freeze DelGiorno at second.

After Ali Black loaded the bases with a bloop single over third base, Marple third baseman Shauna Kerrigan came up with a huge play, grabbing a line drive up the line and doubling up DelGriorno, who had strayed too far off third base on contact.  But, Bentley came up next, and blasted a three-run home run over the left-field fence.
“They had just made that big play, and I just knew I had to get something done,” said Bentley. “I had to put the momentum back on our side.  I made a good swing, and got good contact, and it went out.”
Emily Gillis picked up the win in the circle for Rustin, allowing two runs on five hits.  She struck out three and did not issue a base on balls.  Her second strikeout of the day was the 100th of the season for Gillis.

“It’s an amazing feeling to be headed to the district finals and know that we’re going to states,” said Gillis. “This is such a great team. I have so much confidence pitching with this team having my back. We just have so much fun playing together.”

Marple (15-8) cut the lead to 3-1 in the top half of the second, when Grace Corner led off with a double, and came in to score on a double from Jordyn Hannold.  Corner also scored the other Tigers’ run with a solo home run in the sixth.

“Coming off a year when we had a lot of success last year, this season of re-loading and re-tooling and finding ourselves with new personal has been great,” said Marple coach Mike Snow. “We knew coming in we were going to have to hit, because we knew Rustin has been hitting the ball hard against everyone all year. A couple two-out plays early on go a little differently, this might have been a different outcome.”
The Tigers still have a shot to reach the state tournament when they square off against the loser of the Oxford-Upper Perk game for third place.

“This team has short memories. We’ve been in this position before,” said Snow. “We lost to Springfield in this game last year and rebounded with a big win over Kennett. This game is over, behind us and it’s on to the next task. But win or lose Tuesday, this has been a great group of girls, and an awesome season.”