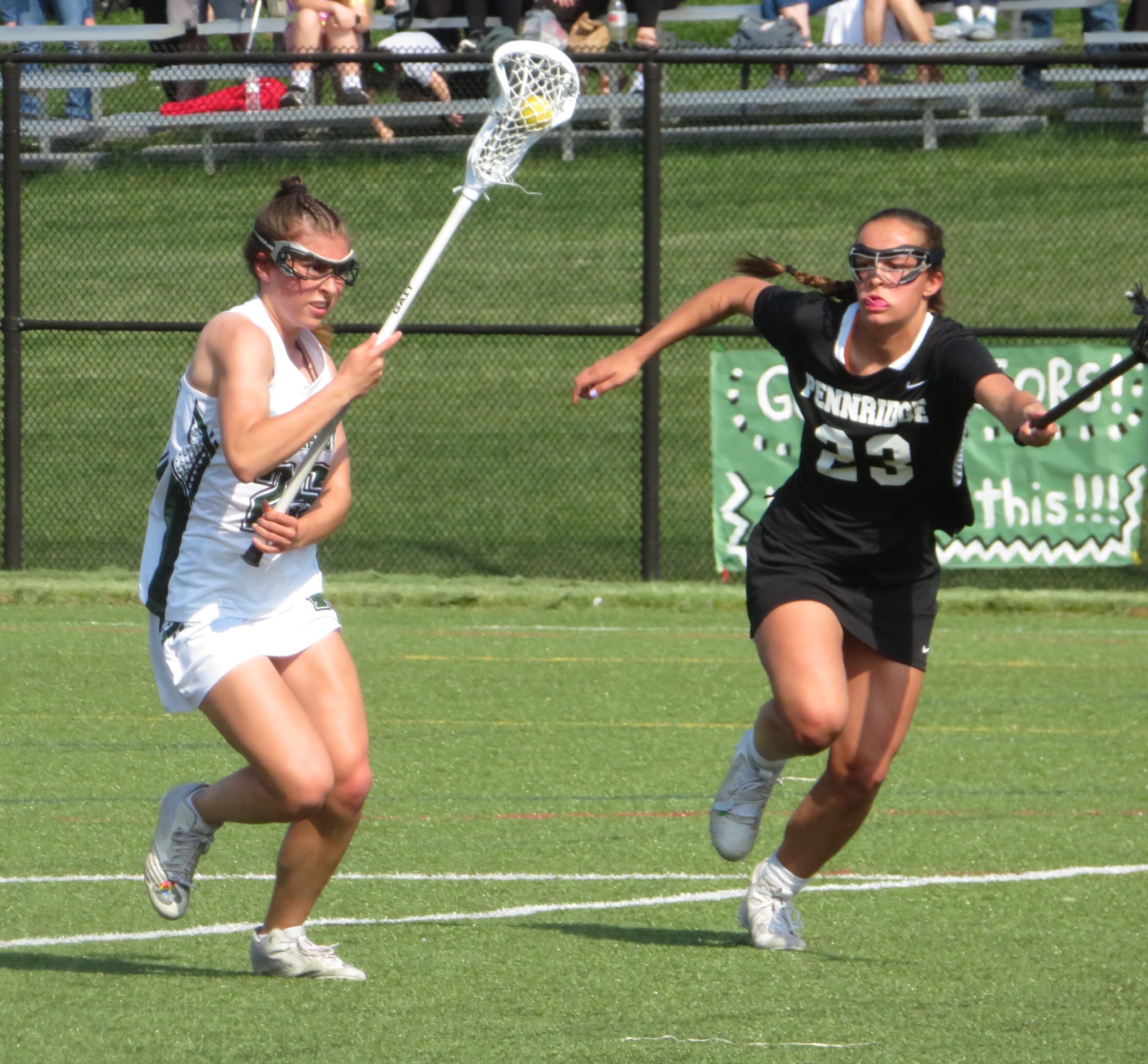 No. 6 Methacton jumped out to a quick three-goal lead over No. 11 Pennridge in the District 1-3A second round Thursday afternoon and never looked back, maintaining a multi-goal lead until the final whistle of a 13-6 win at Methacton High School.

“We really focused at practice,” Methacton senior Delaney Smith said. “We had two really strong practices and then we came out today and we said, ‘This game was do-or-die’ and we were not ready for our season to end. We gave it everything we had.”

“We have so much momentum now,” Methacton junior Michelle Zhai said of coming off the PAC title win over Owen J. Roberts and a non-league win over Penncrest. “It’s great knowing that we’re capable of beating such strong teams.”

Megan Sanelli erased an early 1-0 deficit for the Warriors with two goals in 2:50. Smith doubled the advantage before Zhai made it 4-1 and forced a Rams timeout midway through the first half.

Pennridge trimmed its deficit to 5-3 with less than 10 minutes remaining in the half, but three straight goals from Smith, Jayme Weber and Sanelli extended the Warriors lead to five, 8-3.

Pennridge’s Kendall Posey scored a goal in the final four minutes to make it 8-4 at the break.

Kate Unzicker scored 36 seconds into the second half to bring Pennridge within 8-5, but that’s as close as the Rams would get.

Smith and Sanelli scored back-to-back goals for Methacton before Posey scored for Pennridge to make it 10-6. That score held for more than 12 minutes before Lily DeWan, Smith and Sanelli added late goals to put the finishing touches on a 13-6 victory.

“We play a lot better when we get the ball around,” Zhai said. “Everyone touches it and we’re much more composed, we’re not flustered trying to force anything. That’s what’s really been working. That’s what really helped us win the league championship.”

“Their shots are phenomenal, they’re beautiful,” Pennridge coach Karen Feher said of Methacton’s offense. “We knew that coming in. We knew they would be a really good attacking team and we knew that their goalie was really good as well. Just a combination of those two things threw us off our game and we just didn’t step up.”

Posey led the Rams with a hat trick.

“I think we got a little scared, a little timid,” Feher said. “We came off a huge win against CB South on Tuesday. I think we started off great (with a 1-0 lead), then I think we let the heat get to us and got a little in our lull, but I’m super proud of these girls.”

A big reason why Methacton was able to hold Pennridge scoreless over the final 18:05 was its offensive players helping on the defensive end. Smith was crucial in front of goalie Mackenzie Clark, who made five saves in the second half, while Weber, Zhai and Sanelli pressured the ball whenever Pennridge tried to advance into the offensive end.

“We are lucky enough to have very versatile players on our team that can really play anywhere that they are put,” Smith said. “Playing the whole field is something that our coaches teach us to do. We don’t focus on just one position at practice. We play everything, we always are switching back-and-forth from defense to attack so that no matter where we are put in the game we can step up and play the best we can in that position.”

Methacton will host No. 14 Springfield Delco in the quarterfinals Saturday morning at 10 a.m. The winner heads to the district semifinals and clinches a spot in states. The loser will have a chance at states in playbacks.

The loss ends a successful season for Pennridge. The Rams finish the campaign 14-5 after winning the first district playoff game during Feher’s eight years as coach and maybe ever.

“Huge success,” she said. “It’s all to the girls – their dedication. They really put the time and the effort in to have a successful season. They worked as a team, blended as a unit. We call each other family and it really was this year.”