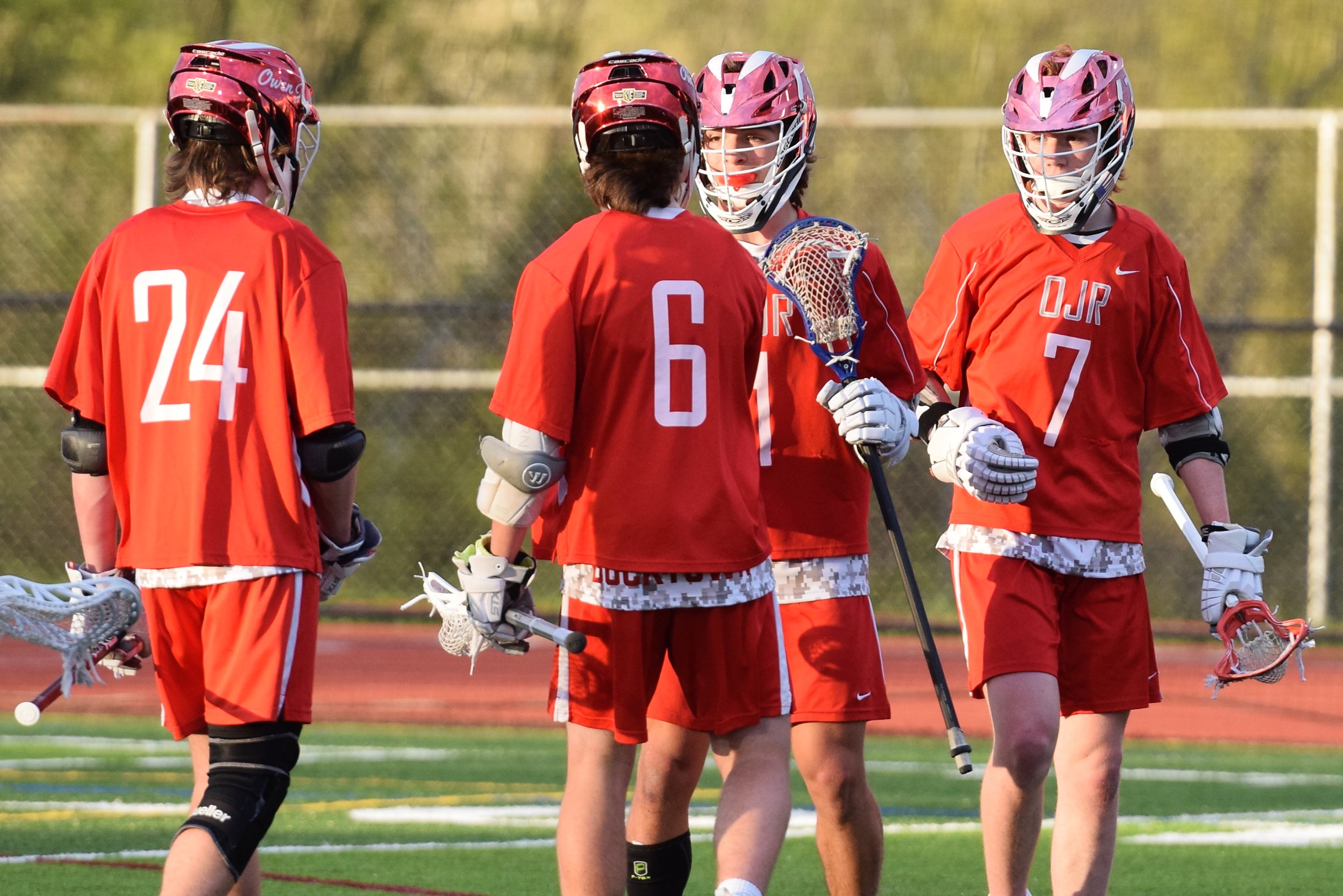 A breakdown of the matchup follows:

Spring-Ford’s Justin Wixted (9) is congratulated by teammates after scoring a goal against Methacton during a PAC semifinal Tuesday at Perkiomen Valley. (Austin Hertzog – MediaNews Group)

Road to the final >> No. 3 seed Owen J. Roberts played arguably their best game of the season to oust No. 2 Perkiomen Valley, 11-5 in the Tuesday semifinals. Spring-Ford used fast starts to both halves, rolling to a 10-4 decision over No. 4 Methacton.

PAC playoff history >> It’s extensive. These two schools met in every PAC championship game from the sport’s introduction into the league in 2007 until 2017, with Spring-Ford holding an 8-3 advantage in those matchups.

Head to head >> Spring-Ford broke open a tight contest after halftime to dispatch OJR, 12-6, at Coach McNelly Stadium on April 26.

Owen J. Roberts at a glance >> Mikey Zadroga’s first year at the helm has yielded immediate results, with the Wildcats not only returning to the PAC Finals and Districts but becoming one of the area’s most entertaining teams. It starts with attack Josh Devine (Cabrini commit, 59 goals in 2022), joined up front by the emerging Dylan Gazda. The high-scoring midfield features Will Jaeger and Will Whitlock and received a boost with the recent return of Gabe DellaPenna.

On the back end, the Wildcats are piloted by Andy Giandonato, whose 75 ground balls to go along with 16 goals speak to the completeness of his game. Parker Waldman provides the other half of the long-pole punch, while Avrey Grimm, Damian Swech, and Nick Sgarra provide defensive grit from the midfield. The whole operation is ably backed by Will Cody and his impressive .675 save percentage in the cage.

Spring-Ford at a glance >> The names have changed, but it’s a familiar story for coach Kevin Donnelly and the Rams, undefeated to this point in league play. The attack remains prolific, led by Justin Wixted (104 career goals in just under two seasons of high school lacrosse) with Will Bonawitz, Lance Terrizzi, and Chris Quigley offering depth, scoring punch, and an unrivaled ability to extend possessions with ball movement and diverse dodging repertoires.

But the Rams’ difference makers are in the midfield, where Will Fish provides the offense as Christian Marchini, Carson Bogdan, Connor Gunzelmann, and Mike Bendowski provide two-way play that allows the Rams to be disruptive in the middle of the field while creating chances to convert in the offensive end.

Parker Smith, Brandon Solomon, and Kyle Huston head a defense backed by goalie Brad Vanella that causes repeated turnovers, frustrating opponents to the tune of only 3.9 goals allowed per game in PAC play this season.

Matchup and prediction >> After the April 26 game, OJR coach Zadroga referred to Spring-Ford as “the standard” in PAC lacrosse. Following the PAC semifinal victory over PV, Zadroga reiterated that supplanting the Rams is the Wildcats’ ultimate mission. “We haven’t beaten [Spring-Ford] in nine years,” he offered, “and that is our goal.”

Whether or not they want to admit it, OJR’s PAC campaign is a success regardless of Thursday’s outcome, going from five wins last year to 13 this season and a title game appearance. But it’s clearly not enough for the Wildcats, and when they play like they did on Tuesday against Perkiomen Valley they’re tough to beat. Devine has the ability to be the best player on the field in any given game, and his offensive supporting cast is both robust and diverse with contributions at all levels of the field.

So why choose Spring-Ford? Because they’re the team that specializes and excels in taking teams out of what they want to do on both sides of the field. The midfield is stocked with two-way players who make the Rams a turnover-creating – and capitalizing – machine, and Vanella allows SF to do what few teams can by matching OJR’s Cody’s effectiveness in the cage.

Spring-Ford’s held their opponents to four goals or fewer in seven of 10 PAC contests and allowed double-digit goals only twice all season. The prediction here: OJR’s too good to hold down for 48 minutes, but getting to double digits against the Rams may be too tall a task. Spring-Ford 10, Owen J. Roberts 7.