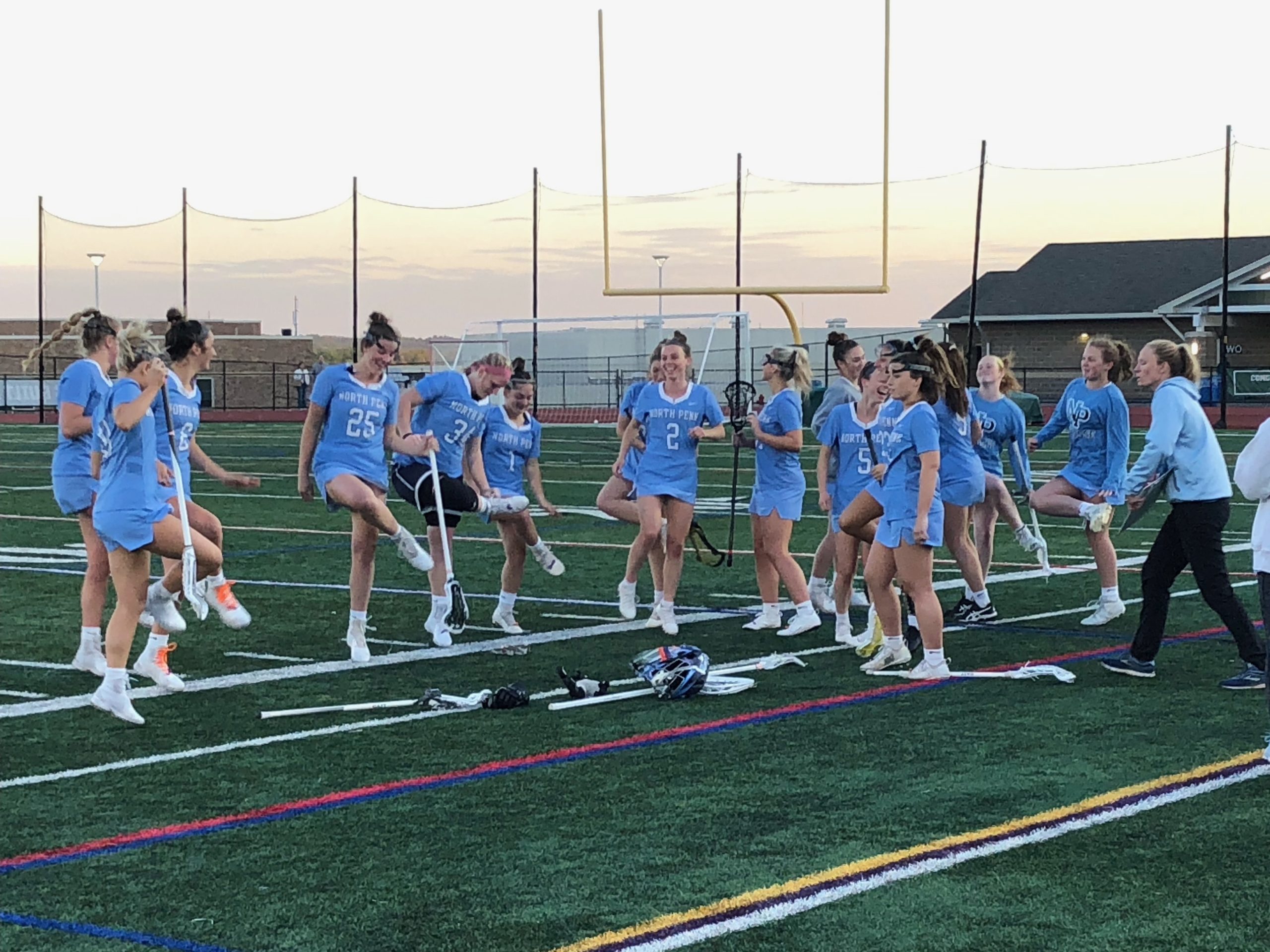 The North Penn girls lacrosse team dances at halftime of the win over Pennridge on Monday, May 9, 2022. (Andrew Robinson/For MediaNews Group)

EAST ROCKHILL >> It’d be a tall task to find someone shorter than Emily Varilla who comes up so big for their team as often as the North Penn senior does for hers.

The smallest player on the field for the Knights and most games between both teams, Varilla handles the job that often has the largest impact on the flow and momentum of a game as North Penn’s primary draw control taker. Varilla, off to La Salle next year, is a talented scorer and grinds out possessions defensively as a midfielder, but the senior knows the better she is winning draws, the bigger the impact she can have overall for her team.

Varilla was superb on the draw while Jordan Baily hit a career milestone as the Knights girls lacrosse team wrapped no worse than a share of the SOL National title with their 15-9 win over host Pennridge on Monday.

“Those draw controls made the difference in the game,” Varilla said. “If we didn’t win the draws, we wouldn’t have had as many opportunities as we had to score and that’s where we won the game, winning the draw controls and keeping the momentum from the start and never losing it.”

Every team approaches draw controls with their style or strategy but it’s not uncommon to see a team put one of their tallest or strongest players in the center of the circle with the idea to get the draw outright into their stick. The Knights, much like they have in every aspect this season, approach the draw as a team effort.

North Penn’s Jordan Baily scores her fourth goal for a 14-7 lead
She tallied her 100th point during the game pic.twitter.com/FqxBxHYPQ3

Sure, Varilla is in the middle locking sticks and trying to wrest control of the ball off the whistle, however she’s not out there alone. Kerry O’Donnell and Kayla Stressman round out the draw unit and between the three of them, they measure up against any perceived advantage Varilla’s lack of height might seem to create.

“When I’m standing there, I know where I’m going to place it and I’ll tell Kerry or Kayla ahead of time, ‘it’s coming to you,’ and I have faith in them that they’re going to win it and we’re going down on attack,” Varilla said. “That’s the biggest part of our game, winning those draw controls, going on attack and capitalizing on those opportunities.”

Varilla, who had a hat trick, feels she’s effective taking draws because she’s not trying to win the draw on her own.

“I’m not focused on winning the draw control myself, I’m focused on placing it,” Varilla said. “I know with my height, I’m not going to get it but if I’m putting it to Kayla, she’s got that height or putting it to Kerry, she’s got the scrappy-ness fighting for it . We have a really balanced draw team so we know we can place it wherever and we’re going to get the draw control.”

North Penn (12-4, 8-0 SOL National) has been both potent and balanced offensively this spring, something that is equally true about Pennridge (11-4, 7-2 SOL National). Knowing the Rams had enough firepower to make a case for the conference crown, Varilla and the Knights knew a fast start was of the utmost important.

Kerry O’Donnell slaloms in for a 9-4 North Penn lead pic.twitter.com/1Vh0SMVnha

The senior helped that happen by winning the first five draw controls of the game and adding in a goal as part of a 7-0 run after the teams traded goals in the first three minutes of play. Baily, who finished with four goals and an assist, had a hat trick in that opening 8-1 spurt on a night where the senior attacker would notch her 100th career point and was a catalyst in giving the Knights an early surge.

A timeout by the Rams helped slow North Penn’s momentum and a couple wins in the draw control circle didn’t hurt either as three consecutive goals pulled the hosts back within 8-4 with 9:20 left in the opening half. That was one of just two sustained runs Pennridge had offensively in the game, the other a 4-1 spell in the second half, thanks to some dogged defending by the Knights.

Just when it looked like Pennridge was getting its footing, Riley O’Donnell helped force a turnover then Kerry O’Donnell did the rest, slaloming through the midfield then attacking the Rams defense for a goal to snap the hosts’ momentum. Varilla knew it was key play and the senior wanted to come up big on the draw to capitalize on it.

“Every time I’m up there taking a draw I’m telling myself ‘I have to place this one right, we have to win this one,'” the senior said. “I know putting it to them, they’re going to be there to get it and that’s what keeps giving us the momentum.”

The Rams fell behind 11-4 but their defense was able to firm up and hold North Penn scoreless over the final 7:15 of the first half. Offensively, the hosts just couldn’t seem to shake loose of the Knights defending, with Varilla noting her team was especially focused on keeping high-scoring senior Maddy Edinger in check.

Pennridge had that spell in the second half, getting within 14-9 with 3:21 to play but Knights goalie Keira Holt made two important stops in the last two minutes to quell any growing momentum. While the loss likely takes the Rams out of the running for an SOL title, they did enter the game No. 4 in the District 1 3A rankings – just a spot behind North Penn – and will have a chance to rebound later this week against Neshaminy before preparing for the playoffs.

Edinger finished with two goals and an assist while Grace Rosica had two goals and three assists. Nickie Machado had a strong defensively, taking the charge on Baily and keeping the junior without a point until the North Penn attacker got her fourth goal with 9:44 to play and hitting the 100-point achievement.

“I’m super-happy, they surprised me with it, with I’m also happy about because if I had known, I would have been so nervous the whole game,” Baily said. “My team, they make it so easy and I love them.”

The Knights have two conference games remaining, starting with Wednesday’s Senior Night against Bensalem and a win in either locks up the outright SOL title. After stumbling down the stretch last year and losing in the first round of the District 1 3A tournament, this North Penn group is poised for a first-round bye and what it hopes is a long postseason stay.

“To see where we started and where we’ve come so far, it’s all due to the fact we worked so hard together and to win this title, it means so much to all of us,” Varilla said. “We really put in the work for this, every single person came out and played their hearts out tonight.”