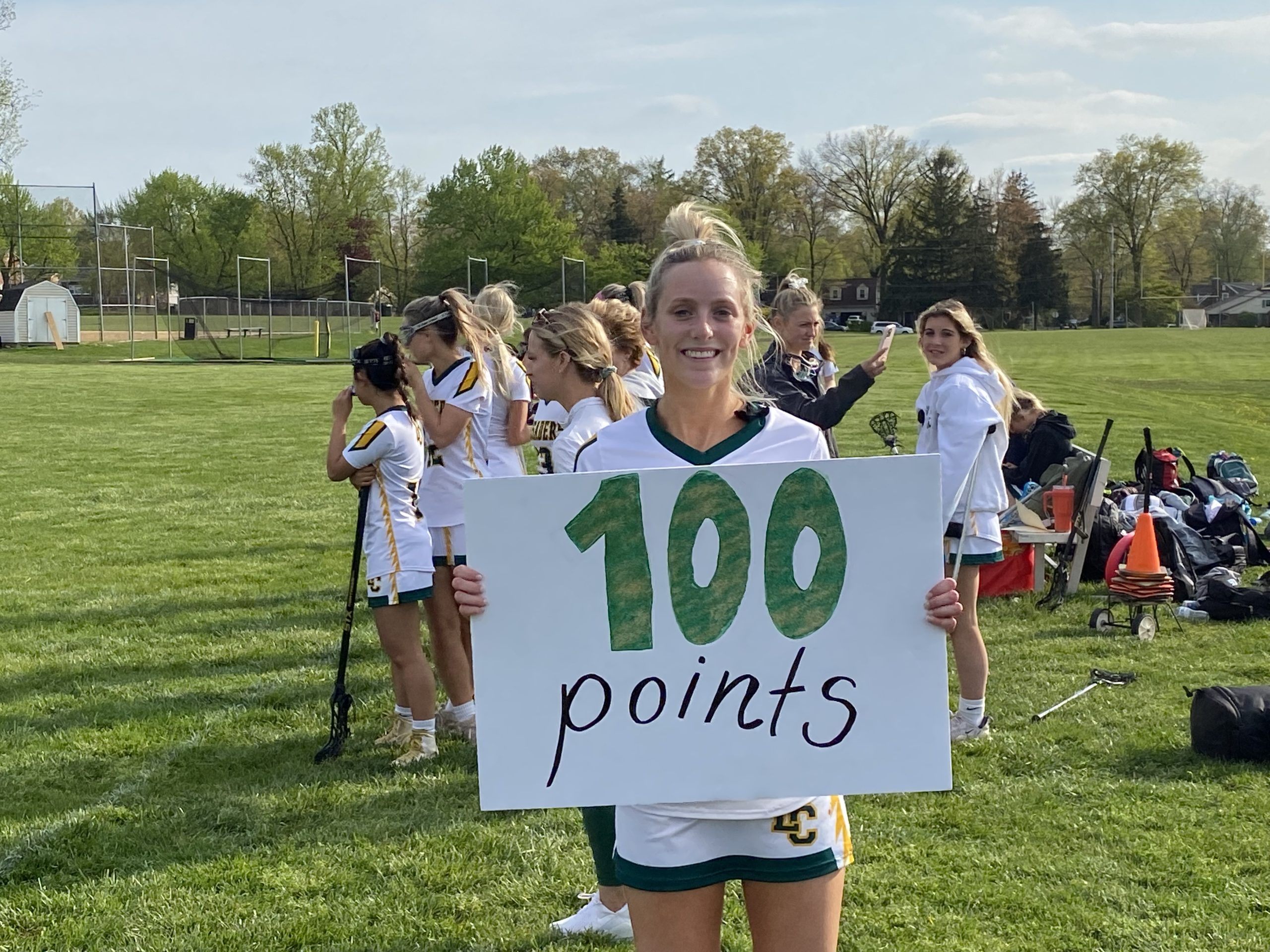 Lansdale Catholic's Emily Simpson holds up a sign celebrating her 100th career point after she reached the milestone in the first half against Archbishop Ryan on Tuesday, May 3, 2022. (Mike Cabrey/MediaNews Group)

Back-to-back goals followed by an assist in less than a three-minute span in the first half had the Lansdale Catholic girls lacrosse junior sitting at 99. But hitting the milestone took a bit of patience.

Simpson finally reached triple digits a little over 10 minutes later, slicing to the front of the goal and putting a shot into the top of the net with 6:55 left until halftime for an 8-3 Crusaders lead.

GIRLS #LACROSSE: @LCCrusaders’s Emily Simpson gets to the front of the net for a goal to record her 100th career point 1H vs. Archbishop Ryan. pic.twitter.com/zLS1rffSyh

“It’s very exciting and it’s something I didn’t really imagine especially after we lost my first season freshman year because of COVID,” she said. “But it is really exciting, makes me excited for next year too and what I can achieve next year.”

Lansdale Catholic scored twice more to lead by seven at the break. Simpson added a goal and an assist in the second half to finish with team-best four goals and two assists as the Crusaders cruised to a 19-8 victory on Senior Day.

“Last year as a sophomore, if you watched her play, you wouldn’t even think she was a sophomore,” said LC coach Jamie McCarney of Simpson. “Hugh asset last year, this year coming up there was no doubt that I would name her captain. As a junior captain you have a lot of roles to fill and responsibilities that not a lot can take on but Emily has filled that role no question.

“Has always stepped up, said ‘what can I do?’ I give her a goal to meet, she tells me ‘What’s next?’ when she meets that goal.”

Sam Beyerle and Alex Frick both had three goals while Julianna Bachand, Grace Marchese and Ava Mercier each scored twice for the Crusaders (5-5, 3-2 league), who earned their second straight win.

“Winning the draws quickly and then just looking for the quick transitions and passing and looking for each other on the cuts,” said Simpson, who has verbally committed to Bloomsburg.  “And also running our plays, I think we successfully ran our plays today. And we were able to score – a lot of seniors were able to score today off of our plays and fast breaks.

Lansdale Catholic honored its 13 seniors before the game, including All-PCL first team selection Grace Picozzi, who suffered a torn labrum competing in swimming this winter and still played a few early games before being sidelined by the injury.

“We were hoping that it’d maybe be muscle but she knew it was hurt, toughed through those games,” said McCarney of Picozzi, who has committed to the United States Merchant Marine Academy. “As a senior captain and wanting to be out there she pushed through until that MRI came. Unfortunately, it was worst-case scenario.”

Without Picozzi – who reached 100 career goals last season – McCarney said the Crusaders have needed larger roles from Kaylei Martin, Holly Wunder and Katie Hogan on draws with both Simpson and Mercier relied on more at the offensive end.

“I think it forced me and my teammates to step up a little bit,” Simpson said. “She was a huge component of our draw circles and our attack and our defense. So I think especially for me, I was never really the center it was always usually Grace so this year I’ve been starting and usually always being the center on the draw so that is something I feel I really got to improve and work on this year. And the other midfielders too have all stepped up.”

Goalkeeper Caroline Kerr made six saves for Lansdale Catholic, which finishes the week on the road, visiting Conwell-Egan for a PCL matchup 5 p.m. Thursday then is at Perkiomen School for a nonleague contest 5 p.m. Friday.

“Feeling is we definitely want to end up back at third (in the league) like we did last year,” McCarney said. “We practice how we play, last year was a big milestone for LC lacrosse so they just want to get back out there, claim third and get some good competition cause we got (Archbishop) Wood coming up, we have Egan.”

“I think our attack, we’re very good at moving the ball quickly and looking for each other,” Simpson said. “And looking for cuts, not always taking it 1-v-1.

Fitzgerald scored on an 8-meter shot to pull the Ragdolls within two at 15:27 but the Crusaders proceeded to collect the final five goals of the opening half.

Beyerle made it 6-3 off an assist from Frick at 12:43 with Martin collecting a ground ball in front of the net and scoring at 11:58.

Ten minutes and 10 seconds after getting career point No. 99, Simpson recorded her 100th with her third goal of the contest at 6:55 for an 8-3 advantage.

“I would say what motivated me was last year seeing Grace hit her 100 points and 100 goals,” Simpson said. “I was like ‘Oh I know this is something I can do, I know it’s achievable.’ So I really worked hard both trying to score and look for my teammates on the assists to reach that goal.”

Bachand tallied the last two goals before intermission to put the Crusaders up 10-3.

Ryan started the second half with consecutive goals from Quarles and Fitzgerald to cut its deficit to five at 20:50 but LC responded by scoring the next six.

“I think we’re at a really high point now,” Simpson said. “We have a lot of energy on the team right now and I think we’re in a good spot.”

Simpson struck for her fourth at 19:31 with goals from Marchese and Kate Fredrickson – Simpson assisting on the latter – extending the margin to 16-5. A Kiera Maxwell goal gave LC its biggest lead at 19-7.