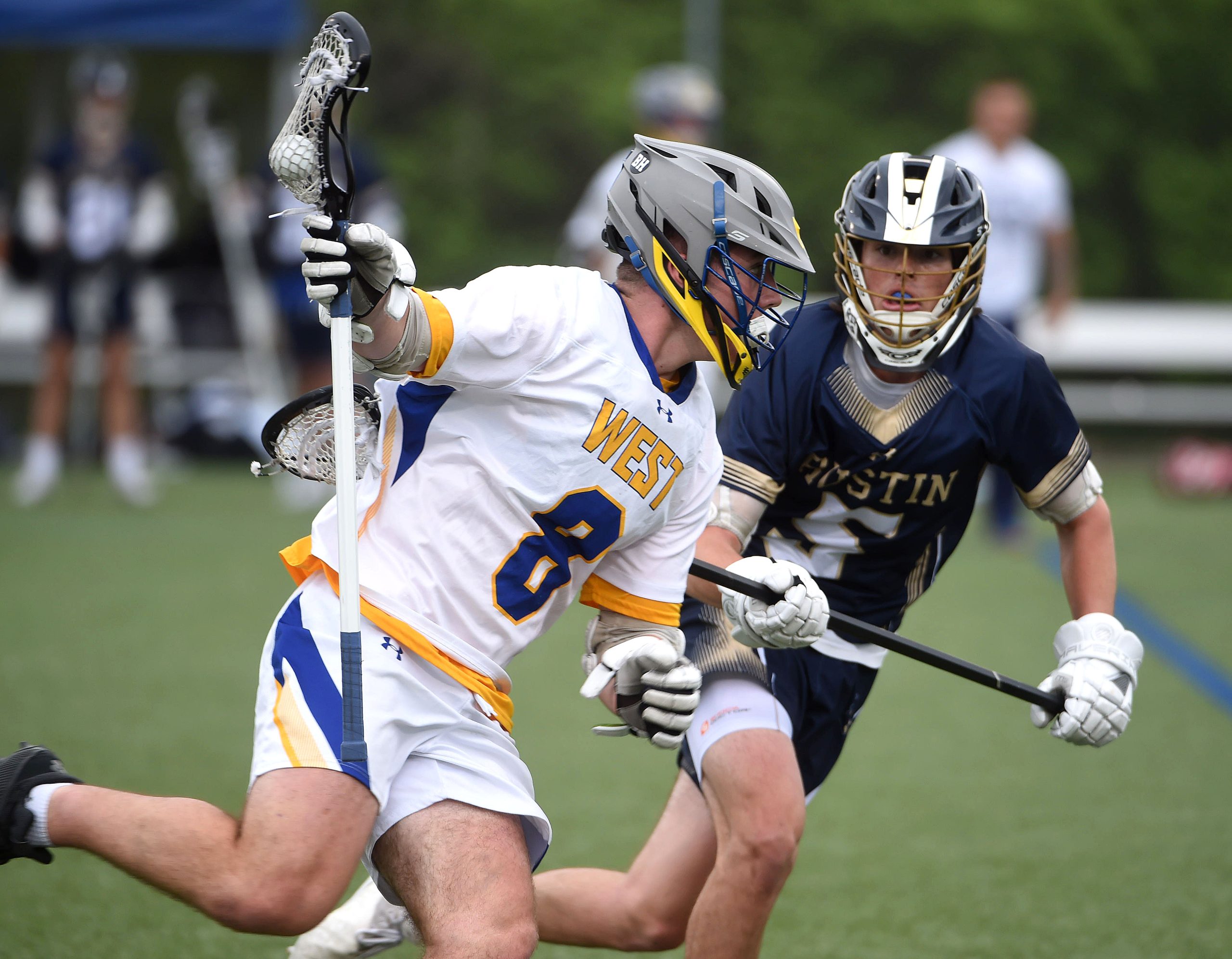 DOWNINGTOWN >> Thanks to a scintillating start, and another dominating performance on face offs from Michael Straub, the Downingtown West boys’ lacrosse squad put the squeeze on visiting West Chester Rustin from the very start of a key clash between Ches-Mont unbeatens Tuesday.

The Golden Knights never backed off and made it interesting, but that double whammy wound up being too steep of a challenge to overcome, and the Whippets emerged with a marquee 11-6 victory. Now 7-0 in the league (12-1 overall), West sits near the top of the standings, just a half-game behind archrival Downingtown East (8-0).

The Whippets and the Cougars are scheduled to collide on May 3.

“They are all definitely important,” said West head coach Billy Davis. “Every game we play from here on out, we are going to play them like it’s against a rival.”

The Whippets did their part, but East has a critical road game at Rustin on Thursday. A win there would set up a monster collision that would determine sole possession of first place with just a handful of regular season games remaining. The Knights fall to 6-1 (9-4 overall), but are still in the title hunt along with defending champion Kennett (7-1).

“It is going to be difficult for anybody to run the table in the Ches-Mont this season,” said Rustin head coach Kevin Philibin. “We have another huge game against (Downingtown East) on Thursday. We have to get back on the horse (Wednesday) in practice, clear some things up, and get ready to go.”

It’s difficult to imagine a better start to an important clash than West was able to pull off on Tuesday, and attacker Bram Monroe was front and center. The junior registered a natural hat trick in the opening 8:36, and when teammate Thomas Venzie scored on a rebound, the Whippets were in front 4-0 less than a minute into the second period.

“(Monroe) is definitely coming on strong,” Davis acknowledged. “The offense was moving the ball well and putting him in good spots.”

Looking to be in serious trouble, the Knights quickly grabbed the momentum, however, with two power play goals in the final two minutes of the half, the first by junior Antonio Santangelo and the second from freshman Nate Pechin.

The run came to an abrupt end when Straub won one of his 19 face offs and found teammate Owen Lundmark for a goal just six seconds into the second half.

“Our guys kept battling,” Philibin said. “We took advantage of a couple man-up situations. But (West) scored immediately after we had the momentum going into the half. So that kind of killed it.”

Just seconds after Bret Bergey made it 7-3, Straub did it again with a face off win and an assist to Venzie for his second goal late in the third. But Rustin did it again by scoring two late goals to pull within 8-5 heading into the fourth period. Santangelo notched his second tally of the day at the buzzer.

The Whippets never wavered, however, and outscored the Knights 3-1 the rest of the way, including two goals by Straub and another by Owen Lundmark. A senior who has signed to play collegiately at Delaware, Straub finished with three assists and was 19 of 20 in the circle.

“There is always ebbs and flows to a game. The big thing is how you respond after giving up a goal,” Davis said.

“We came into the game recognizing that (Straub) is very good and we are going to be in a possession hole, and that’s means we are going to have to be efficient in our clears and on offense,” Philibin explained.

“So when you put yourself in a four-goal hole, and going against a face off kid like Straub, it’s very, very difficult to come back against.”

Santangelo led the way with three goals, but Rustin had a considerable shots on goal deficit (27-9). Junior goaltender Billy Carney made 16 saves for the Knights.

“Our goalie played exceptionally today, but we have to make sure we are clearing it and working through our offense,” Philibin said.

West was without starting goalie Zach Rossman, who was ill, but junior backup Dylan Stang was solid. He only faced nine shots on goal, and a big reason was the play of Venzie, a long-stick midfielder. The junior was matched up often against Rustin’s top scoring threat, Marek Seaman, and held him to zero goals and two assists.

“Our goal was to be smart, play with our feet, and beat (Seaman) that way,” Venzie said.

Then he added: “With this team, every practice is so intense. This is a team like I’ve never been on before. Everybody is involved, staying after practice. It’s awesome to see.”