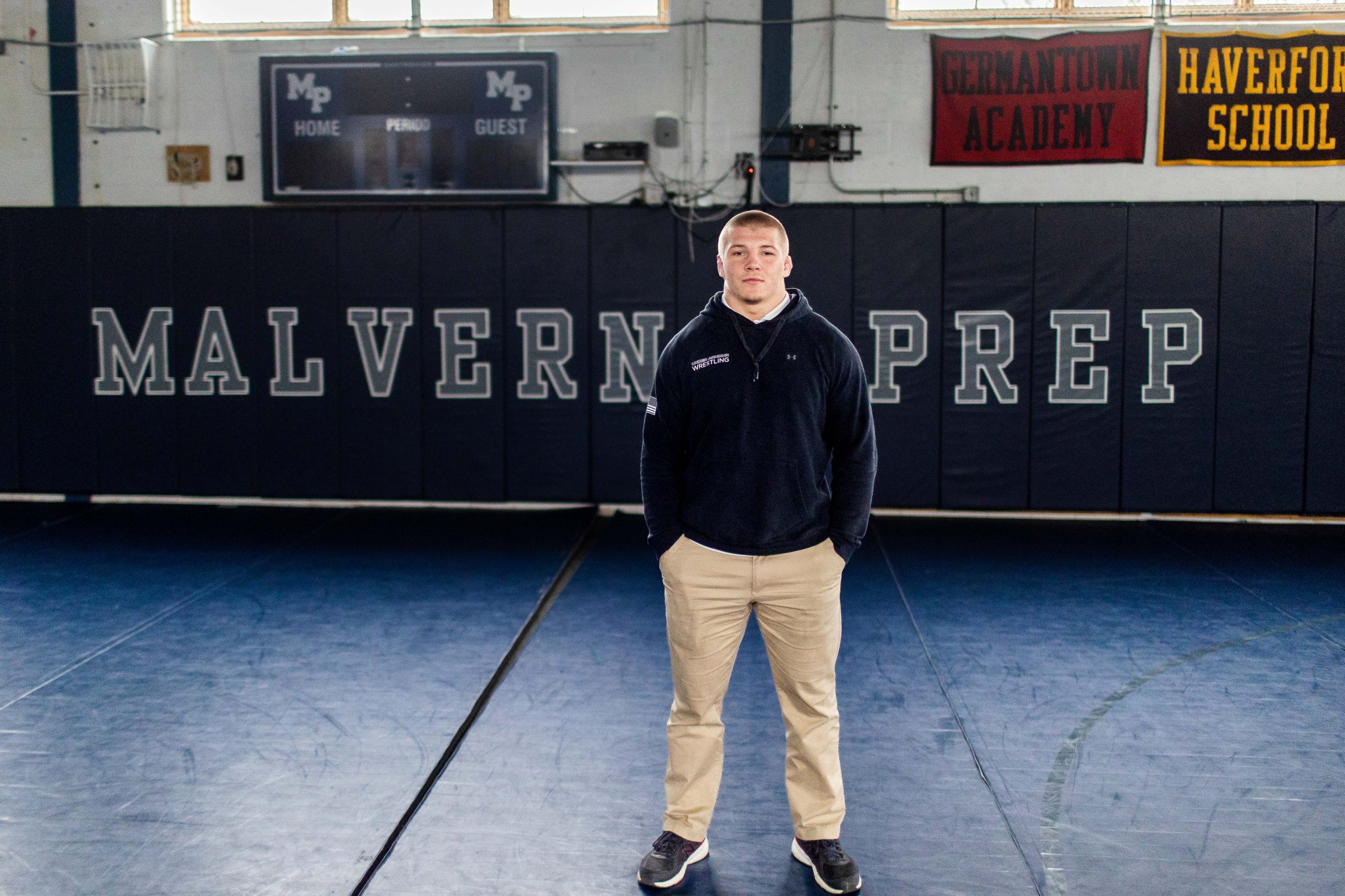 MALVERN >> Being bigger than the general population has always garnered attention, but when someone is not only bigger, but also uber-talented and charming, people really notice.

Malvern Prep’s Nick Feldman is all of those things. The senior just capped off arguably the greatest season ever by a heavyweight in Chester County history, and did it with a personality that draws not just younger fans, and even wrestlers, but the attention from national media outlets.

“People are drawn to him, his personality and his smile,” Malvern coach Nate Lautar said. “There’s something about him that people like and that makes him marketable.”

Malvern Prep’s Nick Feldman went 142-17 for his career and will wrestle at Ohio State, next year. (Nate Heckenberger – For MediaNews Group)

Feldman went 41-0 as a senior, winning titles at the Walsh Jesuit Ironman, Beast of the East, Powerade, Escape the Rock, prep states and National Preps tournaments. He scored bonus points in every match. He capped it all off with a pin against the No. 4 ranked wrestler in the country in the Pittsburgh Wrestling Classic.

For those reasons, Feldman is the 2022 Daily Local News’ Wrestler of the Year.

“Obviously (going undefeated) was a goal and I just wanted to be as dominant as possible,” Feldman said. “All in all I’m pretty happy with the way it worked out. I grew a lot these four years and I think the team grew a lot.”

With his third national title, Feldman became the second Friar to accomplish that feat, joining Michael Beard. That duo closed out their careers in similar fashions, going undefeated in their final two-plus seasons. Feldman won his final 86 bouts, having missed out on a full junior season due to the pandemic. He finished with a career record of 142-17.

Like Beard, who became an All-American at Penn State in 2021, Feldman heads to the Big Ten Conference for the next phase of his career. Feldman will wrestle for Ohio State after being ranked the No. 1 wrestler in the country by MatScouts.

“He’s an irreplaceable person,” Lautar said. “Everything he brings to the table, his character, his personality, his work ethic, he’s the complete package. He’ll surely be missed, but he’s on to bigger and better things and I hope he’s set up to keep getting better at Ohio State.”

Nick Feldman’s father, Josh Feldman, finished seventh in the nation as a heavyweight at Virginia Tech in 1994. After Josh retired from the Navy in the mid-2010s, the family moved to the Solanco school district.

“I got beat up a little bit but started working a little harder,” said Nick, of his middle school days in Pennsylvania. “I’m from Virginia and PA is known for its wrestling. Virginia is not. I knew I had to improve and I always dreamed of wrestling in college.”

Nick is well on pace to follow in his father’s footsteps at the college level, but there’s another heavyweight great Nick hopes to emulate. Former Ohio State NCAA champ, Kyle Snyder, also won Olympic gold, and did at a similar size as Nick Feldman.

While Nick is 230 pounds of pure muscle, he stands at 5-foot-11-inches, the same as Snyder. Nick will likely be shorter than many college heavyweights, but his relentless offensive attack and agility figure to negate any size disadvantage.

“I see being shorter as an advantage,” Nick said. “It’s harder for them to get to my legs and their legs are easier to get to. … I’ve always modeled myself after (Snyder). Him going to Ohio State, those are some huge shoes to fill, but I’m going to keep improving and hopefully one day I can.”

If there was one thing made clear the last couple years in the world of wrestling, it’s that a great big man will still captivate the audience. Minnesota’s charismatic NCAA champ, Gable Steveson, flipped his popularity into a contract with the WWE.

That did not go unnoticed with Nick, who said he’d love to one day cash in on the Name, Image and Likeness deals that are now allowed in the NCAA.

“NILs are a huge part of the sport now,” Nick said. “I’m not going to change anything about myself. If people like it, they like it, but it would be really cool.”

If the amount of autographs or pictures Nick has signed or taken with younger kids or admiring fans are any indication, the Malvern big man will stay a fan favorite in Columbus.

If you ask Lautar, it’s inevitable.

“He’s gonna crush it at the next level,” Lautar said. “Nick matured a lot the last two years and continued to work hard and his ability to flip the switch is better than anyone I’ve ever seen.”